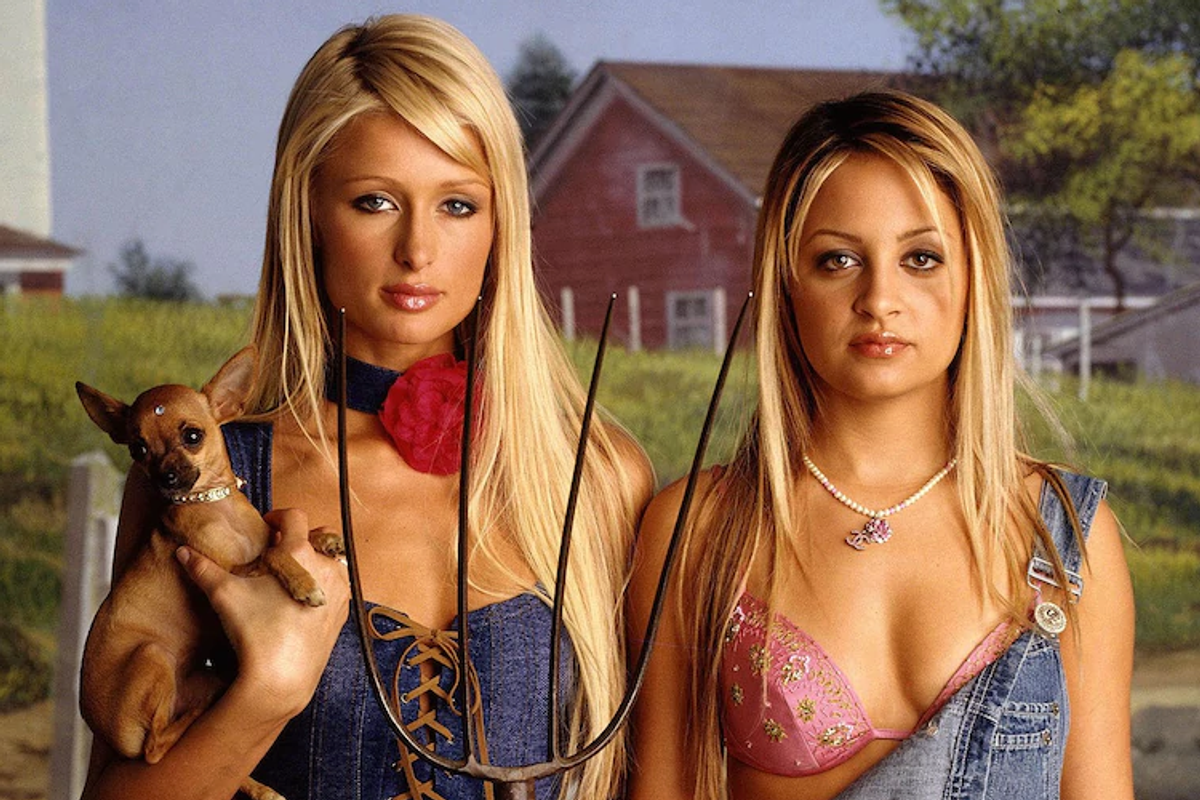 Paris Hilton Was My English Teacher in Beijing

Paris Hilton is many things: a business mogul, pop culture legend, and the artist behind "Stars Are Blind." She single-handedly pioneered American reality television, and influenced an entire generation to shop at Kitson Los Angeles through the paparazzi. She was also my language coach. For seven years abroad in Beijing, I binge-watched her TV shows The Simple Life and Paris Hilton's My New BFF to perfect my L.A. accent before returning to the States for college.

When I was 10, my parents and I moved to China's capital for my mom's business. Up until then, I was just a suburban Asian-American living in California. For any kid, moving to a new country is inevitably a difficult adjustment. Although I spoke Chinese, culturally I didn't fit in. I didn't know anything about local norms outside the historical dramas my dad frequently watched. People would call me a "banana," meaning yellow (Asian) on the outside, and white on the inside.

I began to search for likeminded peers within Beijing's massive expat community. Coincidently, my accent — vaguely British, Chinese and American — was influenced through the friends I made. I didn't really notice the change, until I learned I'd be coming back to the States for college. Just like that, I had my first existential crisis at 15.

Would I fit in at college with my unusual accent, and was I American enough?

So I did the only logical thing: relearn my accent through watching L.A.-based reality TV.

In 2009, China's government banned YouTube due to censorship laws, replacing it with Chinese streaming sites like Youku and Douban. Luckily, full seasons of The Simple Life and Paris Hilton's My New BFF were available. I could sit in my room and get a peek into what I believed was real L.A. Paris became my obsession — everything about her, but especially her voice. That's how I want to sound, I thought.

Watching her shows became a ritual. Every time she'd say something, I'd repeat it a couple times out loud, ensuring I copied her exact intonations and syntax. Linguistically, accents can be dissected and ultimately learned. Linguist Stephen Krashen at the University of Southern California hypothesizes that "learning" is a conscious process of picking up language rules and grammar. In order for me to perfect the "Hilton accent," I needed to understand how she spoke.

Some of my favorite phrases to imitate were:

"That's hot:" Paris' signature. She would place an emphasis on the beginning of that's, while softly pronouncing the h and ending hot with a raspy note.

"Huge:" Here, she would pronounce huge like the name Hugh, and almost ending with an "ah" sound — hue-g-ah.

"You guys should really move to L.A., it's like better weather:" An iconic phrase from Paris' local weather channel takeover during The Simple Life. In the clip, she elongates L.A., dragging it into the rest of the sentence.

Paris' accent is linguistically known as vocal fry. The Daily Mail UK reported that Todd Gibson, assistant professor in communication science at Louisiana State defines it as "a voice register most frequently heard in young female speakers of American English — a low 'creaky' effect typically heard on episodes of Keeping up with the Kardashians."

For a young 15-year-old who desperately wanted to fit in with my future California peers, I associated Paris' accent with what Californians should sound like. While some people prepare for college by cramming for the SATs, I watched MTV, and after two years of rigorous practicing, returned to L.A. with a carefully constructed accent. My vowels were elongated and my speech mannerisms mimicked not only Paris, but also stars on shows like The Hills and Keeping Up With the Kardashians.

Related | An Afternoon with Kim Kardashian

I was a native Californian who only knew California through reality T.V. — a faux-imposter.

When people found out I had lived in Beijing for seven years, they'd all comment on my speech. "Your English is so good, you sound American!" My little experiment worked. I was socially passing, unlike many of the Chinese international students who I'd meet on campus. In a way I related with them, because I was a quasi-international student myself.

Being a third culture kid, a term coined by American sociologist Ruth Useem, I never knew where I belonged.

"Third culture kids have a unique place in any society to which they belong," Useem told The Vancouver Sun. Theirs is a confusing and quite often debilitative condition. They are confronted with cultural walls or pitfalls at every turn. Unable to completely relate to their parent's culture and yet at the same time labelled as 'different' from the mainstream culture they are encouraged to belong to, they are basically cut adrift and left to float in a sort of 'twilight zone' state. They form a cultural hybrid, a blend of cultures that can be interesting, but also confusing and frustrating to them. This condition is exacerbated growing up in a country like Canada. "

Coming back to California meant coming home, and I was determined to successfully leave my past behind. I was convinced that a constructed accent would give me full social mobility. Then, life gave me a wake up call.

One night while I was out with friends in West Hollywood, I had my first encounter with racism. It was around 10 p.m., and we were walking to a local club. Out of no where, I heard a group of people scream in our direction, "fucking Asians!" I stared in disbelief as they walked away cackling.

I sounded American. Where did I go wrong?

While Paris' shows gave me a peek into the home I so desperately longed for, they were merely exaggerations of stereotypes that didn't exactly translate into, well, real life. No matter how much I tried to mimic her accent, I was still Asian-American. I could either accept that my upbringing was indeed different than my peers, and that was perfectly fine, or I could continue to live in dramatic self-deception. I chose the latter.

Now I live in Manhattan and have a core group of fellow Third culture kids from all over. Sometimes we speak Chinese together, or I practice my French and Japanese with them. We're all American by nationality, but culturally we're a global melting pot. Just like in Beijing 14 years ago, I discovered my own community again.

Recently while getting drinks with a new friend, he commented on my accent. "I can tell you're from L.A. because you drag your vowels, and some of your sentences sound like questions. That's how I know you're not from New York." I couldn't help but laugh.