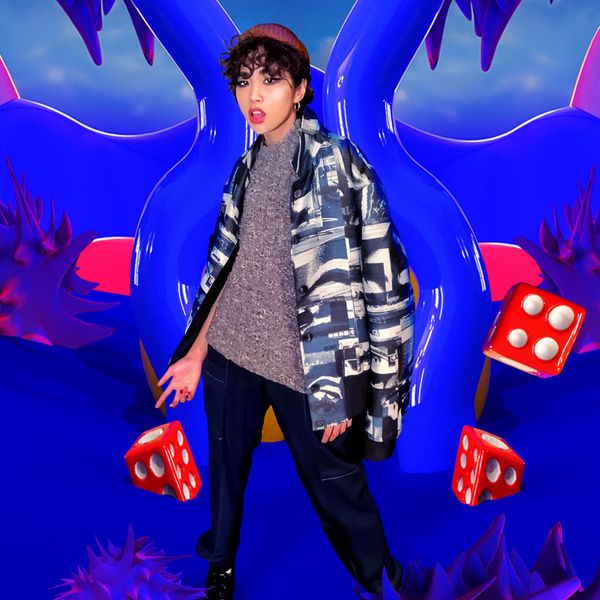 Kim Fernandez AKA @angelknives13's hyper-specific POV videos and cosplays ("ur an immortal vampire who has found someone who looks like your first love... ur confusing her LMAOO") have her hundreds of thousands of TikTok fans simping in the comments. The 19-year-old is also a gamer streaming on Twitch, where you can watch her kill and cruise on Grand Theft Auto or just chat. She's also really good at singing? Check out her take on "Toxic," inspired by the Melanie Martinez version. Dream girl.

POV: Your best friend always has something to say about the people you’re interested in... it all makes sense now. 2020 PAPER Person @angelknives13 💕

Which dating app have you had the most luck on? How so?

TikTok! I actually met my girlfriend on there. As funny as it sounds, it really is the best way to get a feel for someone [rather] than actual apps that were made for dating in my opinion. You can get a sense of someone's humor, vibe/ aesthetic, see them showcase exactly what they're passionate about. It can be a very personal — yet public — video archive of your individuality and artistic expression.

If you could write the headline for your profile, what would it be?

I'll be in LA hopefully getting steady work as an actor and having fun, taking part in projects that I'm passionate about and speak to me.

Killing Eve and the Harley Quinn show are my go to when I have the time to sit down and watch something. I'm in love with the passion, tension, darkness and intensity in Killing Eve. As for the Harley Quinn show, she's one of my favorite characters of all time so it's a show that just brings me a lot of comfort, great for when I just wanna chill.

I'd love to have the power to teleport. I love going to new places but I hate the traveling and flying it takes to get there. Then I could see my favorite person with the snap of my fingers no matter where they may find themselves.

I was in a Zoom class bored out of my mind and I had my camera and mic off, so I figured I'd film a funny POV on tiktok to some sad song just for a kick. When I started filming, I failed to realize that I accidentally unmuted my mic while my teacher was going through some slides and it was fine at first. It just sounded like I was sad and opening up to everyone in class out of nowhere and apparently my teacher asked if I was okay, but I had muted my laptop's volume at that point. I started saying inappropriate things that should not be said in a recorded Zoom class; it was 15 seconds of agony that I didn't even know everyone was going through until one of my friends in my class started spamming my phone saying that my mic wasn't muted. I audibly gasped with a horrified look on my face. Then after I muted myself again I had the craziest of laugh attacks. It'd been a while since I laughed that hard, oh my god.

I'm still in college majoring in acting, so I'd just focus on bettering myself and the craft. I'd probably find another platform to post things when I need an outlet like TikTok to express myself artistically. I also stream on Twitch, so I'd like to keep doing that as well.

I was beyond shocked. I blew up with video of me as the school's resident delinquent poking fun at and flirting with the class nerd (the audience). I couldn't believe that people enjoyed me talking to the camera that much. It for sure felt very rewarding.

"Meet Me Halfway" by the Black Eyed Peas.

I'm scared of mirrors sometimes. Especially at night, I'm afraid my reflection will start moving on its own and try to kill me or that a monster will appear from the back of me or that a serial killer will come out from behind the shower curtain and murder me. Vivid imaginations aren't so fun when they're bored.