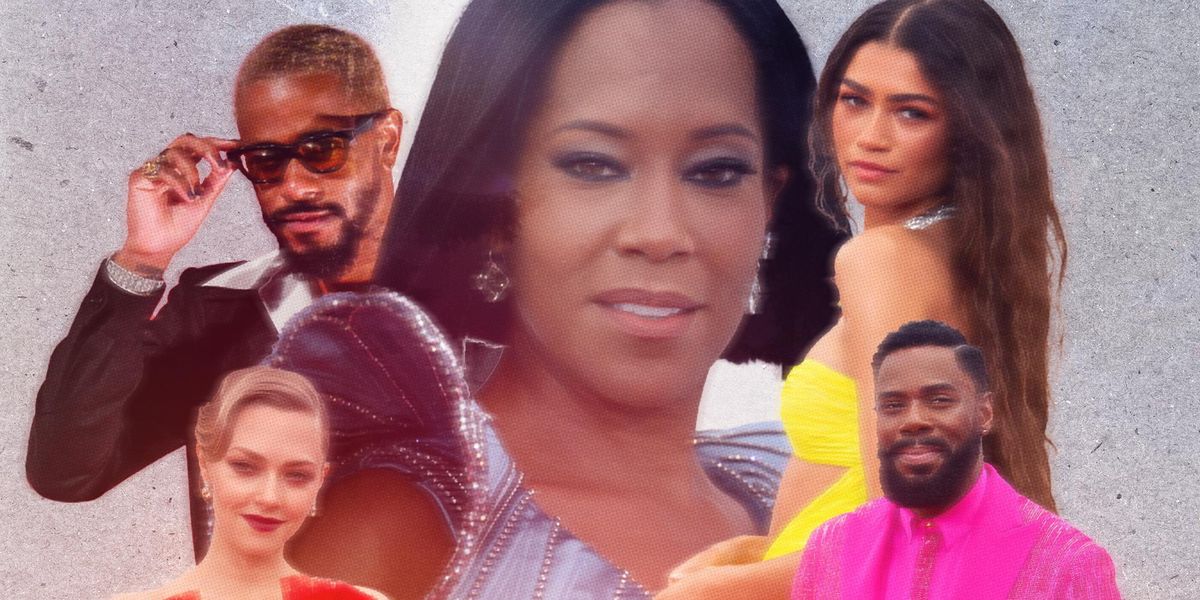 I asked myself in the lead-up to the 93rd Academy Awards if red carpet coverage had gotten a bit too bleak. I looked at my own coverage from last year's ceremony: The Oscars Red Carpet Was... Really Good, Actually. The headline alone came with the implication that to be good was somehow unexpected. And I get the general eyerolliness of awards shows, especially in a time as fraught as this one, but for many they're escapist, light-hearted, aspirational and many other things that antithesize the cringe they induce from others. This is to say, awards are good, awards are bad, but we're not calling the whole thing off.

I'll admit I was worried about how the night would go, especially after an April 19 headline that read "Oscar Attendees Will Not Wear Face Masks During Telecast." Days earlier, co-producer Stephen Soderberg (yes, that Steven Soderberg) said that masks would play "a very important role in the story." Adding: "If that's cryptic, it's meant to be. That topic is very central to the narrative."

That much didn't pan out. Besides Best Actress winner Frances McDormand and Zendaya, few masks were seen on the carpet or inside Union Station and the Dolby Theatre, where the ceremony was held. But enough about celebrities signaling the end of a pandemic that is still seeing hundreds of lives lost daily and infection rates topping 30K a day in the US alone!

First things first, the men turned it out. In particular Colman Domingo in a custom fuchsia Versace suit. This outfit took close to 150 hours of embroidery, with the jacket alone dripping in 4500 Swarovski crystals and sequins. And then there was LaKeith Stanfield in custom Saint Laurent by Anthony Vaccarello. "Pulled up to the Oscars lookin' like your uncle, but since it's a dry bar, I'm going back home," Stanfield wrote on Instagram.

And then there was Daniel Kaluuya, who picked up his very first Oscar, a Best Supporting Actor win for Judas and the Black Messiah. "Dressed in all black like the omen," wrote stylist Shiona Turini, who outfitted Kaluuya in Bottega Veneta and Cartier jewels. Rounding up the men's best looks was pint-sized style icon in the making Alan Kim, who wore custom Thom Browne for his first time out at one of the biggest nights in film and fashion. His look was comprised of the brand's classic shorts tuxedo in school uniform weave with black engineered 4-bar, white poplin shirt, bow tie and their signature 4-bar socks and a black pebble grain calfskin longwing brogue.

Attention can, should and must be paid to Best Actor nominee Riz Ahmed in Prada.

Brad Pitt back in the same Brioni suit? I remain bored. And speaking of same old: Margot Robbie back, back, back again in Chanel. Free her of this ambassadorship. Someone. Anyone.

Then we had Mank nominee Amanda Seyfried in a finely-pleated hibiscus red Armani Privé princess gown with double drop halo earrings from Forevermark giving us the drama we crave from one of the biggest nights in fashion. And speaking of drama, Laura Dern showed out in a black velvet bodice and high low feathered skirt for Oscar de la Renta. "She had a very clear idea of how she wanted it to fit on her," de la Renta creative director Fernando Garcia tells me. She and her stylist [Elizabeth Stewart] fell in love with the dress right away and knew it was going to be perfect. I told her to ruffle that skirt as much as possible because I love seeing it move. I told Laura that I should be poolside in my swim trunks while she's wearing this beautiful, grand gown."

Other stand-out looks included Best Actress nominee Viola Davis in a breathtaking custom Alexander McQueen with cascading Forevermark diamonds. "The dress gives the illusion of showing skin through it, but it's actually a corset dyed to match Viola's skin tone," her stylist Elizabeth Stewart told Vogue.

Fellow Best Actress nominee Glenn Close, who was the night's most viral moment, opted for a beaded Armani Privé tunic paired with gloves and matching silk pants. "We had multiple conversations after the nominations came out, I think we kept circling back to this idea of legacy and celebration on a few different levels," Close's longtime stylist Chloe Hartstein tells me. "It's been such a difficult year, and getting a few glimpses of escapism through the red carpet made us look at Glenn's own red carpet arc and tap into it. I love conversing with my client and building something concrete out of an idea, or a color or a shoulder shape — to be able to dream something up like we do is so incredibly special. Mind you very nerve wracking but the process still blows my mind. Knowing about the artisans that helped create this moment... I guess it goes back to that idea of teamwork, seeing all the pieces come together. It's very touching."

Another stand-out: Carey Mulligan looking like a modern day Oscars statue (no tea!) in the finale look from Valentino's SS21 collection, a sparkling crop top and skirt, expertly paired with Cartier earrings and a ring. H.E.R., who picked up her first trophy for Best Original Song, stunned in a custom Dundas jumpsuit and cape inspired by Prince's 1985 Academy Awards look (the year he won Best Original Song for Purple Rain… get it?).

Overall, the red carpet made up for a ceremony so boring that I actually considered painting my walls just so I could watch them dry as an alternative to sitting and watching a show without much to hold our ever-dissolving attention spans. But if anything was gleaned from last night's ceremony, it's that the red carpet is back and open for business. And that is definitely worth celebrating.