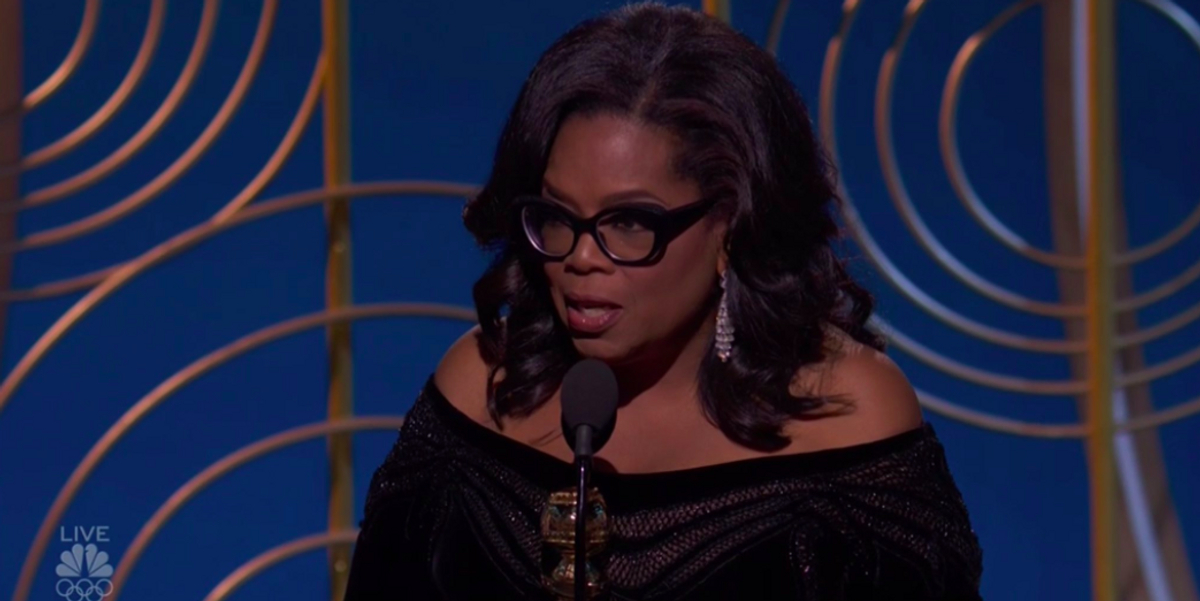 In one of the most anticipated moments of tonight's 2018 Golden Globes ceremonies, Oprah accepted the Cecile B. DeMille Award for "outstanding contributions to the world of entertainment," which the iconic television host and actress certainly has made. Unsurprisingly, Oprah brought the house down with a speech that sounded, dare I say, presidential.

Weaving in the story of Recy Taylor, a black woman who died at age 97 ten days ago, 74 years after being raped in Alabama by six white men who were never punished, Winfrey touched on her own incredible life trajectory.

ICYMI: Ladies and Gentlemen, the inspiring, the incomparable, Oprah Winfrey.

PS - You will ugly cry. You were warned.#GoldenGlobes #TimesUPpic.twitter.com/J4h1nqyHss
— Ricky Davila (@TheRickyDavila) January 8, 2018

"It is not lost on me that, at this moment, there is some little girl watching as I become the first Black woman to be given the same award," she said. "It is an honor and it is a privilege to share the evening with all of them." The rest of her speech dealt with the changing tides of power in Hollywood and the hope that one day soon, girls will wake up in a world that listens to and believes them and that no one will have to say #MeToo anymore.

"A new day is on the horizon, and when that new day finally dawns, it will be because of a lot of magnificent women and some pretty phenomenal men fighting hard to make sure they become the leaders that take us to the time when nobody ever has to say #MeToo again." —@Oprah ✊🏾
— Kamala Harris (@KamalaHarris) January 8, 2018

It was an emotional moment, to say the least, and had plenty hoping the 'Oprah for President' joke of the past five years or so might not be a joke after all:

"It's not lost on me that there are many little black girls watching as I become the first black woman to be given the Cecil B. DeMille Award," Oprah pic.twitter.com/wBJg2e9QO1
— Jamira Burley (@JamiraBurley) January 8, 2018

Oprah might have New Hampshire locked up, but pretty sure The Rock's put in a lot of groundwork in Iowa already.
— Connor O'Brien (@connorobrienNH) January 8, 2018

Let me tell you this room is still vibrating like electricity from that speech. #OPRAH #micdrop #TimesUp #MeToo #GoldenGlobes
— Ava DuVernay (@ava) January 8, 2018

give me the full video link for oprah's speech now so i can set it as my alarm and start every day with this feeling
— Gaby Wilson (@GabrielleWilson) January 8, 2018

And s impossible as it was to follow up her speech, Natalie Portman did her damndest when presenting the all-male Best Director category with Ron Howard moments after:

It can't be easy to follow that wonderful @Oprah speech... but, DAMN, Natalie Portman did an amazing job pic.twitter.com/2SNfEEr4ur
— NYLON (@NylonMag) January 8, 2018