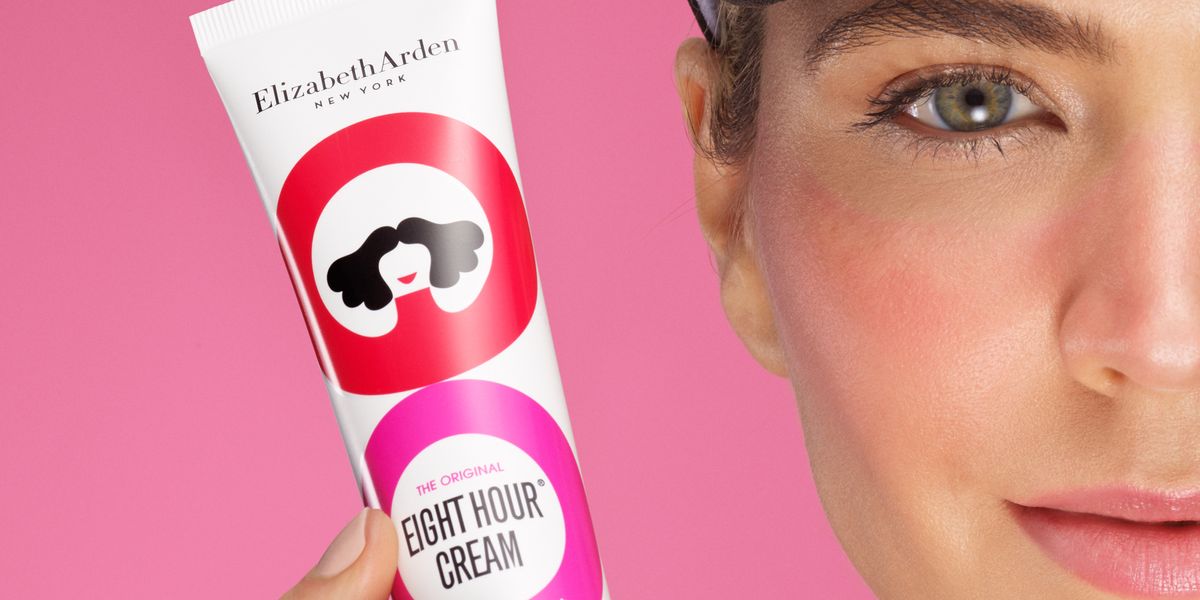 You may not know her name, but Olimpia Zagnoli's work is everywhere.

So much so, the Milan-based illustrator and author has become a regular fixture in both the art and fashion scenes. Zagnoli's signature colorful, shape-centered drawings are hanging in Paris exhibitions, applied floor-to-ceiling in the first-ever Italian Uniqlo store, covering issues of The New Yorker, printed on Prada graphic tees and even featured on that box of pasta you made for dinner.

Tasked with illustrating artwork to celebrate the legacy of the brand's cult Eight Hour Cream — originally created by Arden herself in 1930 and a popular choice for makeup artists throughout fashion week — Zagnoli designed everything from the packaging to the promotional ads.

And now, Zagnoli is lending her design expertise to the beauty space with a new limited edition collection for one of the most established names in American cosmetics: Elizabeth Arden.

"Lending her playful and colorful hand, she turned inspiration into interpretation to delight the endless fan base of this universally loved cult classic," the brand says. "The resulting collection captures the spirit of Eight Hour and celebrates its infinite uses, infinite fans and the infinite individuality of women."

To create her vibrant illustrations, Zagnoli says her process started with playing off of the name "Eight Hour" and later drew inspiration from the multi-functionality of the cream, which can be used as a moisturizer, a dry skin or minor burns treatment and as a dewy bronzer.

"I began sketching with the eight shape in mind, referring to both the name of the line but also the symbol for infinite, turning it into a human figure," she tells PAPER. "I then created a sort of pattern to include more characters and accentuate the idea of an unlimited audience and uses. The colors came quite natural as I love the brand's iconic red and pink together."

The collaboration with Elizabeth Arden, and more specifically its ties to CEO Debbie Perelman, seemed like a natural fit for Zagnoli and her work's female empowerment focus, seeing as the number of women in beauty leadership positions continues to be startlingly low.

"I'm so inspired by Arden herself and her entrepreneurial spirit, starting her own company before women could vote, which is kind of amazing," she says. "And today, the brand is led by women and its CEO (part of the Revlon corporation) Debbie Perelman is the only female CEO of a beauty conglomerate around the world."

Below, Zagnoli speaks exclusively with PAPER about beauty, representation and the importance of championing female entrepreneurship across industries.

Tell me about the collaboration with Elizabeth Arden and how it all happened.

Olimpia Zagnoli: I was contacted by Elizabeth Arden last year to create a limited edition for the classic "Eight Hour" cream and lip balms. I was already familiar with the cream because it's the kind of product I buy at airports around the world to help with chapped lips, dry cuticles and all the dehydrated little things that tend to manifest when I'm away from home. I also discovered it's great to use after hours of drawing, when my elbows are sore from all the rubbing against the desk.

Is there a message you're trying to communicate with this project and your work in general?

Olimpia: Illustration allows me to represent reality in ways that are not always considered in traditional communication. Bodies can bend to the extreme, hair can be sculptures, aerospace engineers can be women too!

What was the inspiration behind your work for the brand?

Olimpia: I focused on the name of the line "Eight Hour," on the fact that it can be used in at least eight different ways and therefore it suits a multitude of people and its needs.

Tell me about the process behind creating the design you did for this project? Was it more of a collaborative process in terms of sharing ideas or did the team come to you with a clear vision?

Olimpia: The team at Elizabeth Arden has been very respectful of my creative process and gave me total freedom. I began sketching with the "8" shape in mind, referring to both the name of the line but also the symbol for infinite, turning it into a human figure. I then created a sort of pattern to include more characters and accentuate the idea of an unlimited audience and uses. The colors came quite natural as I love the brand's iconic red and pink together.

Although women continue to be the biggest consumers of beauty, a majority of beauty brands are still owned by men. How can female entrepreneurship be championed more prominently within the industry and what needs to change?

Olimpia: I'm so inspired by Arden herself and her entrepreneurial spirit, starting her own company before women could vote, which is kind of amazing. And today, the brand is led by women and its CEO (part of the Revlon corporation) Debbie Perelman is the only female CEO of a beauty conglomerate around the world. Knowing this, I can certainly say that women deserve more space, respect, safety and equal pay in any field. It's not only a matter of women learning to "speak up" but an entire educational revolution that needs to happen.

What are your thoughts on the current state of diversity and representation both within art and beauty? Do you think a lot of it tokenized?

Olimpia: I think the current state of representation varies a lot depending on where you are. When I'm in Manhattan, Elizabeth Arden's birthplace, I have a feeling that every person, every size, every color, every gender is represented both in reality and in store or on billboards around the city. While we shouldn't be fooled into thinking that a few inclusive campaigns or artworks will change the world, they certainly can help in raising questions and turning the attention towards people that have been misrepresented or ignored until now.