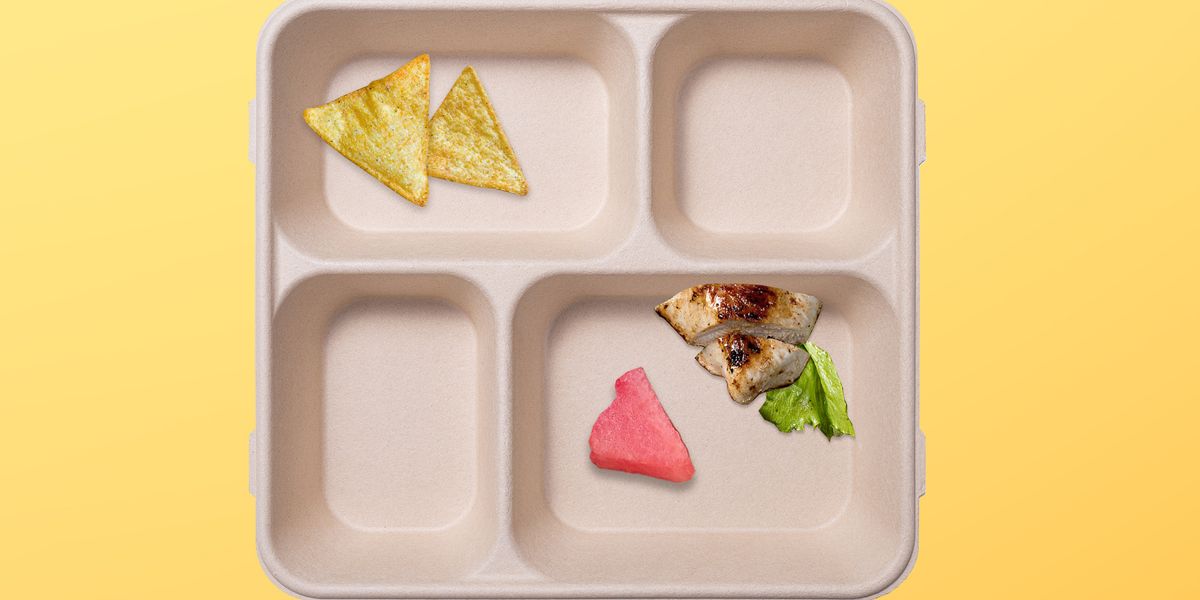 Heading back to college in the midst of a pandemic is stressful enough, but over the weekend, students at New York University had to deal with another obstacle at the beginning of their fall semester — inadequate meals while trapped in quarantine.

NYU students took to TikTok to share shockingly tragic and small-portioned meals provided to them by their university, as reported by Eater. While in a mandatory 14-day quarantine after arriving on campus, multiple NYU students began to go viral with videos documenting their offerings, some of which almost rival FYRE Fest in their scarcity and... inedibility, (see: watermelon-chicken salad).

ok but can somebody tell me what watermelon chicken salad tastes like? #nyu #nyufood #nyutiktok #watermelonchickensalad #fyp

On Wednesday, August 19, out-of-state and international NYU students were welcomed back to the Manhattan campus early, but "back to school" looked very different this year. Per Gov. Andrew Cuomo's recent mandate, the students were required to self-quarantine for 14 days and could only leave their rooms "for medical visits or to collect their three meals from the hallway," which are provided by the university, according to New York Post.

However, the "meals" left outside their doors left a lot to be desired and students began documenting their food woes on the app. Many shared that meals "arrived hours late," some "never arrived," others ate "breakfast for dinner" or had to salvage their "leftover dinner for breakfast," in a series of chaotic stories.

Students who requested specialized meals, including kosher, vegan and halal options used TikTok as an outlet for their frustration, as they received dinners that didn't meet dietary restrictions:

I can’t make this up #nyu #vegan #quarantine #fyp

One NYU freshman, Madison Veldman, went viral for sharing a "smell test" of a bagel and other contents from a university-offered lunch.

On Thursday, August 20, the university issued a statement apologizing to quarantined students with "valid" complaints about a "particularly regrettable error."

John Beckman, NYU's senior vice president for public affairs and strategic communications, acknowledged students' complaints in the statement and listed steps the university planned to take including "adding staff" to "respond promptly to student food complaints," "deliver the meals to the rooms more promptly," and "provide money to students to order delivery themselves if the food that shows up isn't good enough," amongst other plans. Beckman blamed "a never-before-tried operation for us and our food vendor, Chartwells" for the inadequate offerings.

The school wrote in a Facebook post that each student would then receive a $100 e-card to order delivered food, although several students told BuzzFeed News that this did not arrive as soon as implied. Alexandra Mettler, a first-year undergrad, said that she received "a couple hundred dollars" in Venmo payments after her videos went viral, with strangers coming to the aid of struggling students.

Two off-campus students, Olivia Sher and Noa Baron, went so far as to create a Google Doc where any user with an NYU email address could share their Venmo and Cashapp accounts to request money for additional food. Sher told BuzzFeed News that they "modeled it after the many mutual aid funds that came out throughout COVID-19."

"I want to be clear... mutual aid is wonderful and I'm very happy to see so many people contributing, but mutual aid only exists because the institutions that are supposed to support us in the first place have failed," Baron said to the publication. "NYU promised its students who live in housing meals, and they failed."

Outside of New York, other students have shared their own nightmarish dining experiences while remaining on-campus in a post-coronavirus world.

As first reported by the New York Times, University of Georgia (UGA) student William O'Bannon shared a highly viewed TikTok of an experience waiting in an extensive line for food at a dining hall. O'Bannon also shared that the school meal plan was $2,000 per semester before documenting a hamburger and fries as the sole contents of the meal:

While not a meal complaint but still worrisome, Colorado College's quarantined students fear living in uncontrolled heat while in their non-air-conditioned rooms, as reported by Colorado Public Radio. The school recently made plans for their students to get fresh air by allowing them to exit their rooms at least once a day.

Other universities, such as University of North Carolina at Chapel Hill have removed the possibility of on-campus learning altogether, removing students from their grounds after outbreaks of coronavirus spread across campuses.

If the viral clips are any indication, the fall 2020 semester won't be any less chaotic or tumultuous than the rest of the year has been. At least students are able to commiserate as a community on Tiktok. Unless...