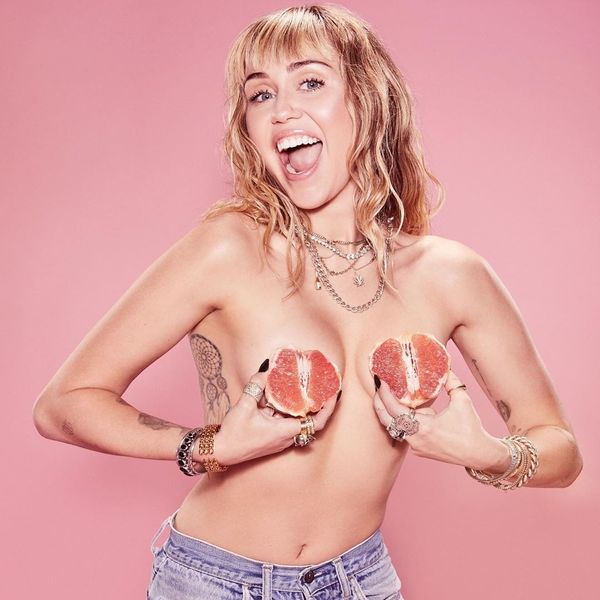 Over the past few months, the future of women's reproductive health has been looking bleak with abortion bans being approved in a number of states. Miley Cyrus has been one of the celebrities who have been most vocal about their outrage on this impediment on women's rights. And on Tuesday, luxury designer fashion label Marc Jacobs publicly took a stand with the singer/ actor/ activist by releasing "THE Charity Hoodie."

In partnership with Cyrus's Happy Hippie Foundation, the label announced that they're producing limited edition pink sweatshirts under the more affordable and accessible The Marc Jacobs collection. The designer item features a photo of a topless Miley playfully holding sliced grapefruit, and the words "Don't Fuck With My Freedom." And if the photo looks familiar, it's because it is also quite close to the imagery on the singer's new album She Is Coming.

The shirt, which costs $175 each, is currently available for pre-order on the Marc Jacobs website, and ships to 26 countries worldwide. All proceeds from sales go to Planned Parenthood.

Though the Happy Hippie Foundation centers more specifically on LGBTQ rights and homelessness, Cyrus and her organization recognize the role that reproductive rights have for all humans. In an Instagram post late last month, @happyhippiefdn wrote, "Racism, homophobia and transphobia are deeply tied to accessing affordable and quality healthcare. Attacks on abortion access leave far too many people of color, LGBTQ people and people with low incomes with no options at all."

To find out how you can help all those affected by severe abortion bans, click here.