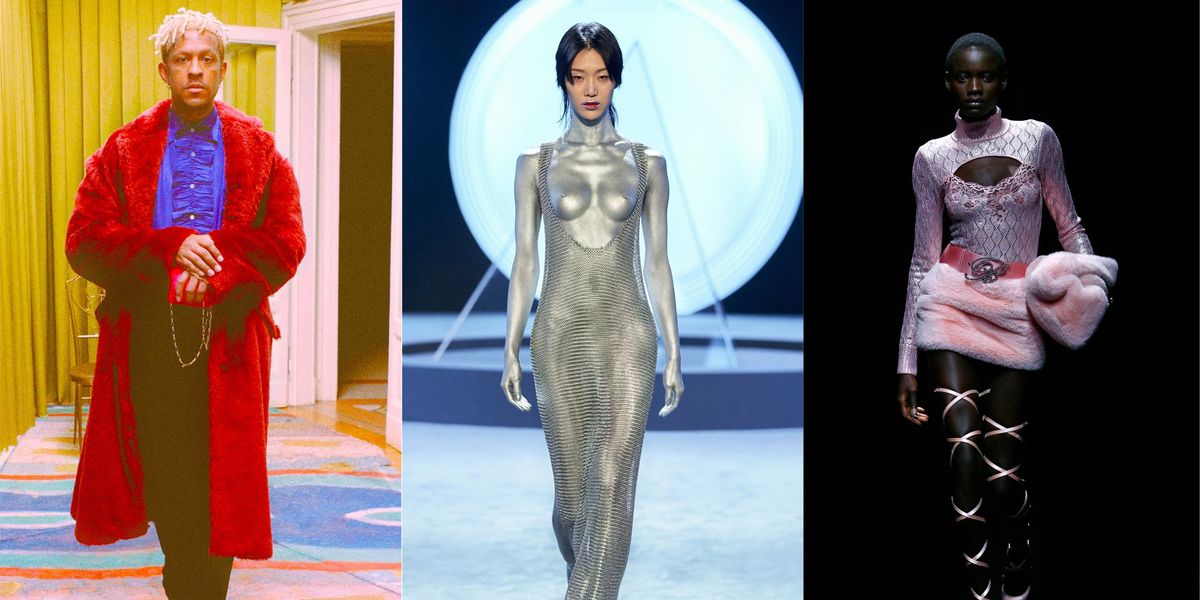 Despite the absence of big brands like Bottega Veneta (which show at their own pace these days) and Versace (they pushed theirs back for later this week during the Paris schedule), this season's digital Milan Fashion Week shows gave us plenty to dissect and obsess over.

From Max Mara's 70th anniversary collection and Kim Jones' first Fendi ready-to-wear show to Blumarine's early aughts makeover and Moschino's salon-inspired video, the Italian fashion capital experimented with a variety of formats to highlight their latest offerings. See, below, for some of the main highlights for the Fall 2021 season.

Marni creative director Francesco Risso hosted a virtual hangout this season with some of his closest friends and collaborators dressed in the collection's eccentric wares. Among them was rapper Mykki Blanco, who starred in the brand's lookbook and put on a performance, and Babak Radboy of Telfar, who was also the artistic director for the project.

The Sci-Fi Throwbacks at Ferragamo

Pre-millennial sci-fi movie classics like Gattaca, Until The End Of The World, and The Matrix all influenced Paul Andrew's retro-futuristic collection for Salvatore Ferragamo, which was shown via a space-y film that blended virtual reality and CGI to great effect. The final look — a see-through chainmail dress — was worn over a model whose body was spray-painted in silver finishing. "The objective was to engineer a collection that sees the present through a prism of the future," said Andrew, "unleashing a multitude of fresh perspectives."

The Sexy Y2K Rebirth at Blumarine

One of the few pleasant surprises of Milan Fashion Week (the other being Philosphy), Blumarine served up a throwback to sexy early aughts dressing circa Paris Hilton and Britney Spears complete with furry miniskirts, hip-slung low-rise jeans and even butterfly nipple pasties. The brand is known for its watercolor palette and romantic flourishes, but as new creative director Nicola Brognano tells Vogue, his Blumarine is "more dirty, bitchy, sexier," a sentiment many of us can get behind these days.

Moschino's Glamorous Night at the Theater

In what was perhaps the best "fashion film" of Milan, Moschino staged a glamorous presentation inside an old-world theater complete with big names like Hailey Bieber, Winnie Harlow and Precious Lee. Maye Musk performed hosting duties onstage, adding to the lovely sense of storytelling that divided the collection into separate themes. Dita von Teese closed things out with a cheeky butt flash in her heart-adorned gown and gloves. The inspo for this show was the 1939 film The Women directed by George Cukor and starring Joan Crawford.

The dialogue between Raf Simons and Miuccia Prada continued with their second joint women's ready-to-wear collection that built upon some of the menswear elements from January including oversized bombers and gloves with tiny zipper bag compartments. The video showed flashes of models huddling together with rager music in the background, perhaps a nod to a future where we can well party again. Speaking of parties, the jolts of sequins throughout indicate the duo are feeling very optimistic about glamour again. Check out the conversation afterward between the designers and names like Marc Jacobs and Hunter Schafer.

For his first ready-to-wear outing at Fendi (he showed his first couture collection for the brand just a few weeks earlier), Kim Jones eschewed the brand's signature flashy logos and monograms for a more subdued yet elegant approach. While the color palette was muted, there was a mix of materials, layering and shine that made for a versatile wardrobe complete with big statement furs — the house signature — and prized accessories.

If only the students at my high school looked this immaculate. Philosophy Di Lorenzo Serafini went full on prep mode thanks to its use of letterman sweaters and jackets with heritage crests and collegiate uniforms. Stylist Ib Kamara lended an incredible touch of Italian cool-teen glamour to the lineup by adding berets, square-toed boots and padded scarves in funky, neon colors and plaid prints.

Max Mara turned 70 this year, and the brand kicked off the festivities with an Anglocentric digital jubilee that saw them transform a room from Milan's Triennale design museum into a space that resembled London's Regent Street. There was a mock coronation of a Max Mara queen, who was bestowed a camel coat from the brand in lieu of a crown. Sweaters were emblazoned with the year of the brand's founding — 1951 — and there were new updates to Max Mara's 101801 coat, a garment that was first designed 40 years ago and has since been worn by first ladies and businesswomen alike.

MM6's fashion film took place entirely backwards, staring with the finale walk with confetti falling down all the way to the models getting ready backstage. The topsy-turvy feeling extended to the clothes as well, which featured a mix of reversible, upside down and inside out garments that exposed usually hidden details in plain view. The result is a nod to the brand's avant-garde and deconstructed origins only blown up and exaggerated for these strange times.