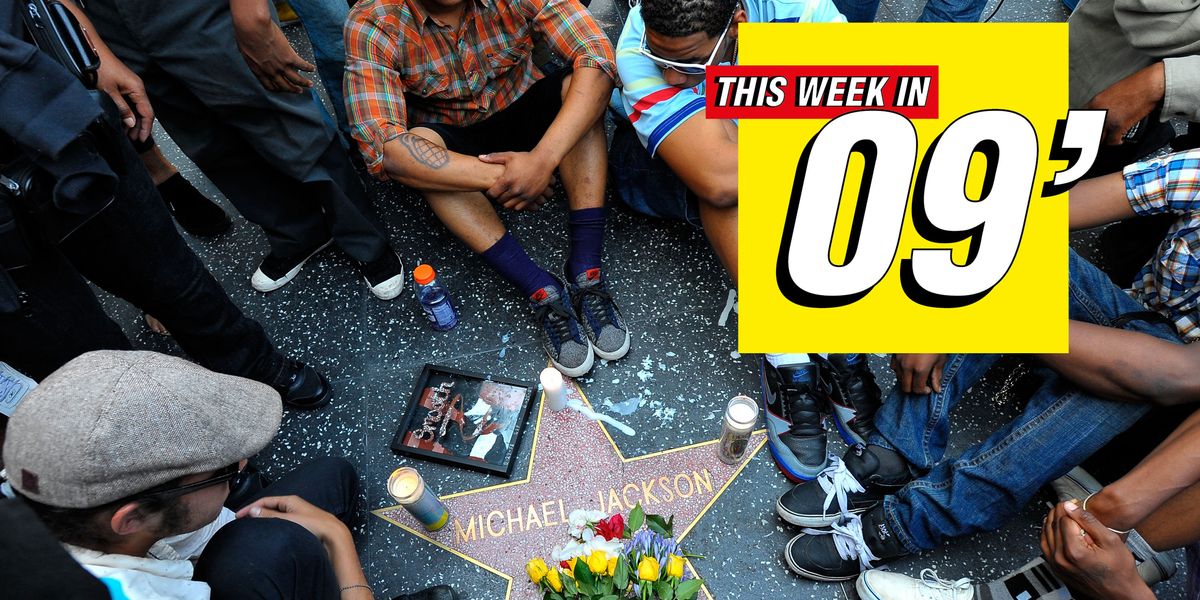 This Week in 2009: Michael Jackson's Death Rocked the World

On June 25, 2009, Michael Jackson died of a prescription drug overdose at the hands of his personal physician, Conrad Murray, who was later convicted of involuntary manslaughter. Jackson and Farrah Fawcett, who died the same day, were arguably the first two major celebrities to be mourned by fans on social media — preceded only by Heath Ledger, whose 2008 overdose was also discussed on a mass online scale. Ten years later, every celebrity death brings an outpouring of timeline grief. But no one rivals Michael Jackson's impact, in death or life.

The King of Pop dominated the media cycle as soon as initial reports of his collapse emerged. The week the news broke, it was rumored that MJ fans were committing suicide after hearing of his death. Various outlets reported that his autopsy report was faked. His hit songs once more dominated the charts, and the likes of Elizabeth Taylor, Madonna, Diana Ross, and Tina Turner paid tribute by releasing statements. Janet Jackson gave a speech about her brother at the BET awards, surprising many with her appearance so soon after the event. Authorities fueled speculation about what had occurred by publicly releasing a recording of the fateful 911 call from Jackson's home. Reports emerged that Jackson was heavily addicted to drugs, and that his family had tried to stage interventions. The singer had been rehearsing at LA's Staples Center for a sold-out series of London-based comeback performances the night he passed.

Elsewhere in Hollywood 10 years ago, Bradley Cooper denied dating Jennifer Aniston, Lindsay Lohan got back together with Samantha Ronson, and The Pussycat Dolls, who toured with Britney Spears as a supporting act during her Circus tour, told press they'd never actually crossed paths with the troubled pop star despite playing the same crowds each night.

With marriage equality not yet a sure bet, President Obama held a gay pride reception at the White House and vowed to overturn "unjust" anti-LGBTQ laws: the Defense of Marriage Act, and the military's "don't ask, don't tell" policy.

The Jonas Brothers were on the cover of Rolling Stone, after debuting at number one with their album Lines, Vines and Trying Times. Perez Hilton premiered what he accurately predicted would become song of the summer: Cobra Starship's "Good Girls Gone Bad," featuring Leighton Meester. Drake's "Best I Ever Had" was similarly inescapable. Kanye West released the video for his single "Street Lights." Lady Gaga made her Glastonbury debut, wearing a mirrorball dress with some fun pyrotechnic effects.