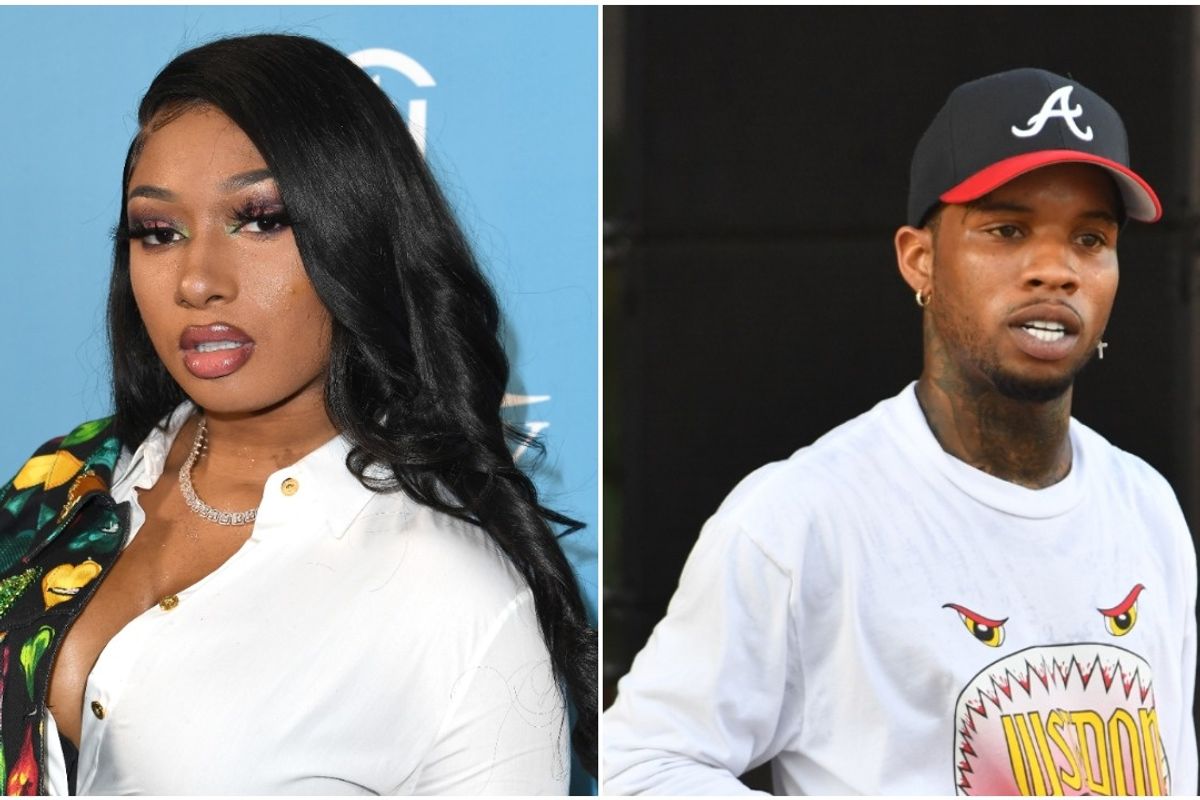 In July, Megan Thee Stallion revealed that she was shot in the foot at a Hollywood Hills pool party. And though she never addressed speculation that fellow rapper Tory Lanez was responsible, Megan has now confirmed in a new Instagram Live that he was, in fact, the person who injured her.

On Thursday night, the star told her followers that she was in a car with Lanez, another friend, and a security guard when an argument ensued. According to Megan, she then got out of the vehicle and began to walk away, at which point the person in the backseat and Lanez — who was arrested at the scene for carrying a concealed weapon — began shooting at her.

"You shot me," Megan said, addressing Lanez directly. "And you got your publicist and your people going to these blogs lying and shit. Stop lying. Why lie? I don't understand."

Initially, Megan said she wanted to keep the situation off the internet. However, given Lanez's handling of the situation, she finally felt like she had to publicly refute rumors that she hit him, as well as the gossip that their argument stemmed from a potential romance between Lanez and Kylie Jenner.

"Even though he shot me, I tried to spare him," she said. "You shot me. You're scared and you've got your whole fucking team on the internet lying."

As for why she didn't immediately tell responding officers what happened, Megan explained that she was concerned about police brutality.

"I'm scared. All this shit going on with the police. The police is shooting motherfuckers for anything. The police was literally killing Black people for no motherfucking reason," she said, adding that she "didn't want to die."

Unfortunately though, Megan also had to once again call out the people accusing her of lying or faking her injuries, echoing what she wrote in a since-deleted post that featured a photo of her foot.

In the wake of Megan's Live, TMZ is now reporting that the Los Angeles District Attorney's office is planning to launch an investigation into the shooting, as well as considering assault charges against Lanez.

And while Lanez himself has yet to respond, people from all corners of the internet have since come forward to support Megan, including fellow artists like Kehlani and JoJo — both of whom said they would be dropping their forthcoming collaborations with Lanez.

Def took him TF off https://t.co/g71jTOytXB

Not only that, but the news has also prompted many to defend Megan against critics calling her a "snitch," as well as discussions about the way Black women are often forced "to consider the safety of everybody else *including* the safety of her abuser."

"That is the narrative and the pain of so many Black women... y'all will never ever get it," as one person wrote. Meanwhile, another commenter explained that this situation exemplified why, "more Black women need to start telling on these n****s."

"N****s are calling Megan a snitch for speaking up about the violence that was done to her," they said, before adding, "So many BW probably could've escaped domestic violence situations if someone knew what was happening to them."

See what else people are saying, below.

Important. Even in the moment of being in danger herself, Megan, like many other Black women still had to consider the safety of everybody else *including* the safety of her abuser.

Niggas are calling Megan a snitch for speaking up about the violence that was done to her, and you know what? More black women need to start telling on these niggas. So many BW probably could’ve escaped domestic violence situations if someone knew what was happening to them

Megan said “even though he shot me, I tried to spare him. And y’all aren’t sparing me.”

That is the narrative and the pain of so many Black women... y’all will never ever get it.

Just because someone loves to talk about Black girls doesn't mean they love Black girls. All of these conversations about snitching& how Megan should handle trauma really boil down to people being mad that she's a person, not a passive object to project their feelings onto...

Tory watched Megan get slandered up and down, get turned into a meme and didn’t even admit to his faults. He harmed her and had the nerve to go radio silent when he could’ve owned up to his shit. But “Protect Black Women” huh?

I controlled the replies on this because straight black men don’t have the energy to hold that nigga Tory Lanez accountable. They’d rather spew misogynoir at black women defending Megan (and homophobia at black gay men doing so). Fuck Tory Lanez. Fuck all of you too. https://t.co/IYkaXBMun9