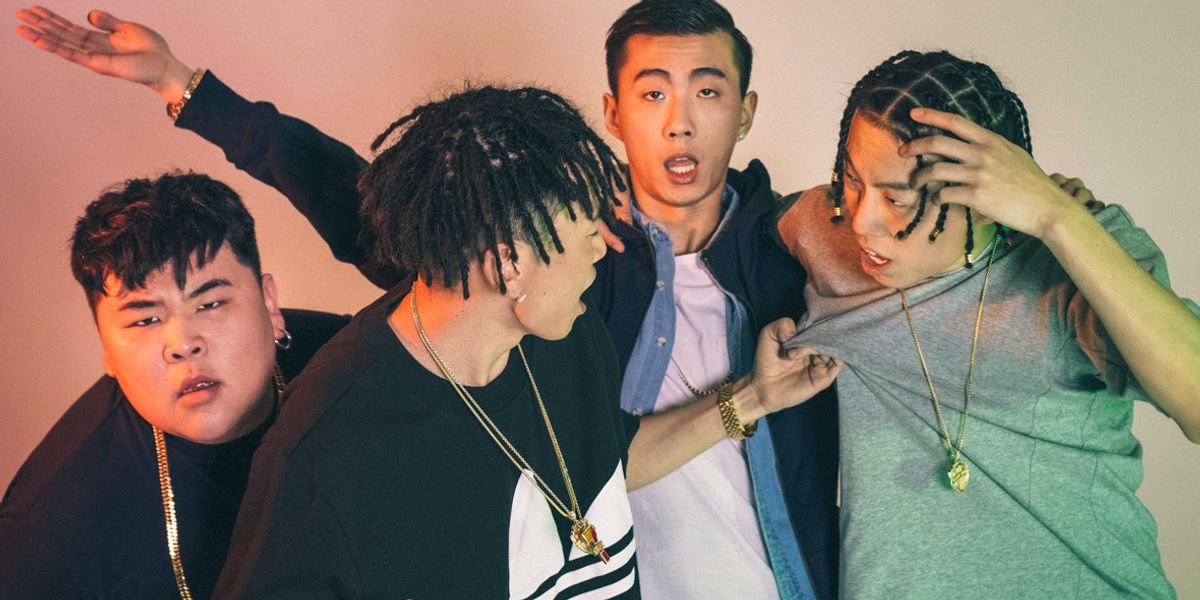 Meet the Higher Brothers, the Rap Group Climbing Over the Great Firewall of China

We have a strange idea of China in the West -- if it's not Trump aggressively spitting out the name like it's a cuss word (Chy-Nah) then it's as a nebulous, bogeyman who steals our jobs and threatens to make Chinese the international business language of the world. We also think of it as a creative no-man's land where a lack of access to Google, Facebook, Twitter, Instagram, or YouTube has led to a country into darkness. Only that's not exactly true.

Chinese censorship may stymie artist flow, but that doesn't mean there aren't ways around it. When Melo, a lyricist and rapper from the rap group Higher Brothers, wrote a viral song about Uber with the lines "I don't write political hip-hop. But if any politicians try to shut me up, I'll cut off their heads and lay them at their corpses' feet" he was brought in for questioning by the Public Security Bureau. But that didn't stop him or his group mates from continuing to reach the youth with their music. The Higher Brothers, who hail from the city of Chengdu, make the rap songs that consistently blow up.

They've released four singles off their latest album Black Cab, "Made in China," "Bitch Don't Kill My Dab," "711," and "WeChat," which features Keith Ape, to mass internet adoration. We spoke with the group about their writing process and where they pull inspiration from.

What would you all say is the hardest part about making your music? How often do you come up against Chinese censorship laws and how do you create around them?

MasiWei: There's nothing exceptionally hard in making music for me. I just do it. The censorship laws hasn't affected me and my process of making music.

DZ: The hardest part of making music is when I'm job searching or working full-time. I almost let making music music become my hobby. I balance it as best I can. Censorship hasn't affected me personally.

PSY: The hardest part of making music is in the beginning, when I don't have an exact plan. Or when I didn't have hope in the possibility.

Melo: The hardest part of making music is my family not understanding what I'm doing.

What groups/rappers are your biggest influences? Do you remember how you first heard them? What was happening at the time?

MasiWei: 50 Cent is my biggest influence. After watching "Get Rich or Die Trying" in middle school, I started looking for more hip-hop music. It eventually inspired me to make my first demo.

DZ: Kendrick Lamar. The first time I heard him was on CCTV5 Sport TV. It literally shook me. Kendrick introduced rap music to me and I've been loving it ever since.

PSY: Migos! The first time listen to Migos was when I was in my friend's car and they got me so high off of it.

Melo: J.Cole. When I read his lyrics... it's just so amazing.

It's clear that you have great crossover potential, but is that the goal? Are you creating for a specifically Chinese audience or do you have global aspirations?

MasiWei: Our focus is to make music for everyone, for the world.

Do you consider China or Asia as a whole a new hub for rap?

MasiWei: Rap is becoming more popular in China, because the Internet is making the world closer. Higher Brothers is representing China and we want to continue putting Asia on the map. 88Rising has been helpful in getting our music outside of Asia.

DZ: Rap music is everywhere now, not specific to one place.

PSY: Yes, because Asians love hip-hop culture. Higher Brothers has a chance to make rap unique to us and it's our time to do that.

Melo: Asia is becoming a popular place for rap. Nothing can stop good rap from becoming popular. Good stuff is good stuff.