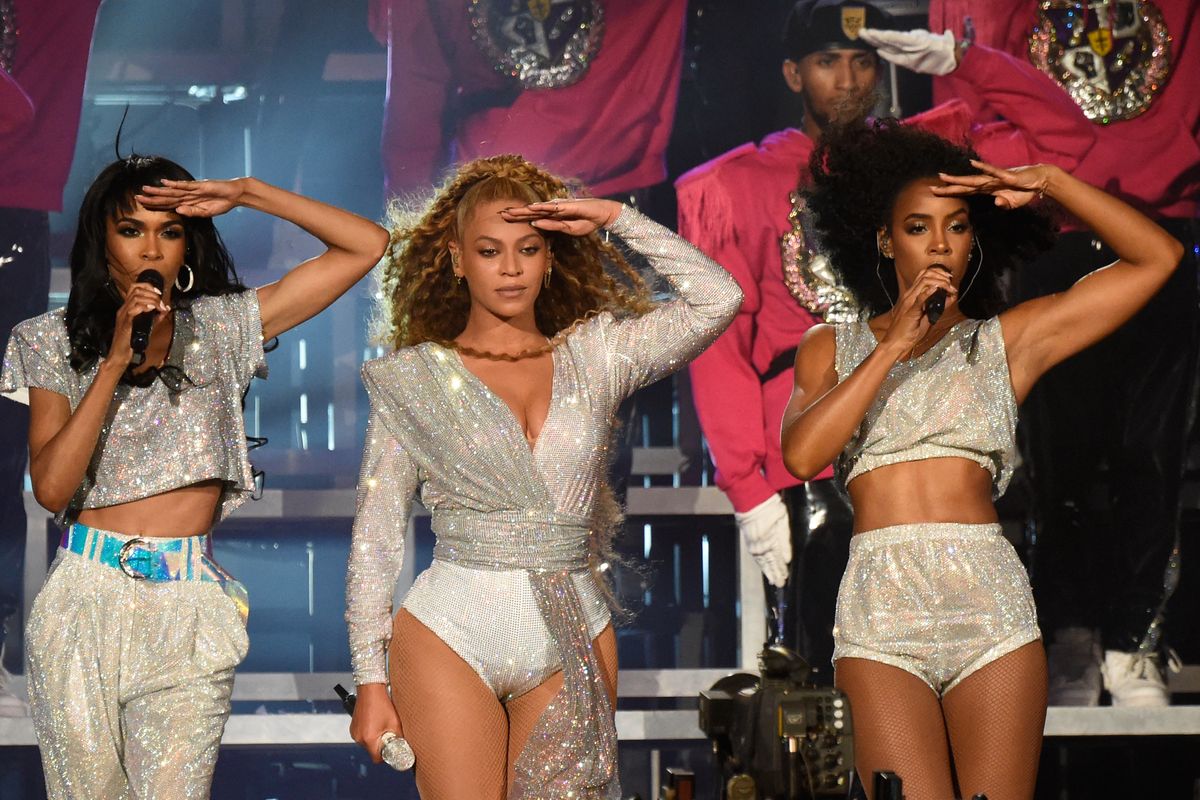 It was inevitable. Survivor: The Destiny's Child Musical aims to premiere in Houston next year, with plans for Broadway, London, and a world tour. The show is being created by Beyoncé's dad, Mathew Knowles (who's Destiny's Child's co-creator and manager), along with writer, producer, and director Je'Caryous Johnson.

"I want to pull back the curtain," says Knowles. "I feel it's time to give the world an opportunity to hear, see and feel the victories and failures that I've had as a husband, father and manager who risked everything in pursuit of fulfilling dreams — those of mine and others." The Alabama-born biggie (and ex-husband of Tina) helped guide Destiny's Child to more than 60 million records sold, starting in 1997. Knowles is also notable for having been President of the Music World Sanctuary Urban label, with artists like Chaka Khan and Earth, Wind & Fire on the roster. In addition to the live show, Knowles' upcoming book, Destiny's Child: The Untold Story, will go into detail about his experiences guiding daughter Beyoncé Knowles, Michelle Williams and Kelly Roland to the top. And he regularly speaks at colleges like Harvard, offering insight into his own experiences and achievements.

Mathew just filled me in on the business he's crazy in love with.

Hello, Mr. Knowles. When will you premiere Survivor: The Destiny's Child Musical?

We're not sure yet. Were at the early stages. Je'Caryous, who is from Houston, is an exceptional playwright and producer. We just got the script and have a little work to do. We'll go through the steps — hire the actors and you know the process. It'll be first quarter next year.

The Cher Show has three women playing Cher. The Donna Summer show did the same thing. Will there be nine Destiny's Child stars?

We're not gonna do that. The main character is me, because I'm telling my perspective. It starts when the girls were very young on Star Search, up till about 2010. That's what we're doing more — telling my story. At 67, if I don't tell my story, someone will tell his story and it would be inaccurate.

Does the show cover some of Beyoncé's solo career?

"There's not a week that passes that there isn't a license I have to negotiate somewhere in the world, a song or a commercial."

If I had a magic wand, it'd be Idris [Elba]. But we've reached out and the timing is off. We'll cast it and get the best person.

When Destiny's Child broke up —

I never use the term "broke up," but "when they decided to retire," which is a better word. A breakup is typically because of drama, whereas when you retire, it's because you want it.

OK, when they retired, you handled their individual careers?

For a time. All three. And I still officially, contractually manage Destiny's Child. There's not a week that passes — I have to get on the phone with Sony today, we have a major deal offer — that there isn't a license I have to negotiate somewhere in the world, a song or a commercial. People think Destiny's Child is inactive. People forget that with the partnership with Sony, we put out compilation albums. One [in 2013] was called Love Songs, and it had a new song the women did with Pharrell.

"People tend to think [Solange] does not exist."

Beyoncé seems talented and nice, but she's basically inscrutable. We really have no idea what she's really like.

I'd say good for her. There was a point when Beyoncé made a conscious decision to take total control of the media, and I say good for her. She's at that level where she can do that. She dictates the narrative.

She determines what aspects to go public with?

Exactly. Even the narrative in terms of releasing products. We might wake up tomorrow and there's a new album.

That was amazing that she kept her 2013 Beyoncé album a secret.

One of the most incredible parts has been, "How do you get that many people to keep this secret?" Thirty people at the record label, plus the studio, the writers and producers, the driver who drove her to the studio has to keep the secret, and the pilot who flew her back and forth.

Well, it was to their own benefit.

But in this age of social networks, it's not easy.

What is your relationship with Beyoncé?

I have a great relationship as a father with not just Beyoncé, but people forget I have this talented, gifted kid named Solange, who is a Grammy winner and has had a number one album. People tend to think she does not exist.

"If I had to do it all over again, I would change nothing because I believe failure is an opportunity to grow, not a reason to quit."

And your relationships with Beyoncé and Solange today?

Every day, it's not a daily dialogue. Daughters tend to always gravitate to their moms more than their dads. I think it's pretty standard in the universe, my relationship.

And your relationship with Tina?

I wouldn't say best friend because my wife isn't Tina. I have a Tina and a Gena! Tina is a friend.

Do you think Beyoncé and Solange will pursue more acting?

I don't know. My role is that of a dad. Both have had great movies they've been in. That's a decision they'll make. I want to give a shoutout to my grandson Julez, who's an incredible basketball player.

Are you going to manage him?

I'm going to be his agent. You don't manage athletes, you manage recording artists. [Laughs]

What is some of the negativity you had to endure along the way to your success?

The most challenging thing was separating and walking the line from manager to father/ husband. That's very difficult in the music industry. If I had to do it all over again, I would change nothing because I believe failure is an opportunity to grow, not a reason to quit. Most people when they make mistakes, they want to quit rather than learn from it.

Related | Solange's New Album Is a Love Letter to Home

What racism have you experienced in your life?

I had a very unusual childhood, growing up in Gadsden, Alabama, under Governor George Wallace, who became known as the greatest segregationist in the country. But I never went to a Black school. These were schools that me and others desegregated.

"Racial trauma is no different than sexual or any other type of trauma. It lives within us."

They had been white schools. What was that like for you?

It was very difficult. There were days that you woke up and were either frightened or didn't want to go to school. And there was the backlash of being the first — and backlash from your own community, which didn't accept you. The term was "Oreo"— Black on the outside, white on the inside. In my speeches at universities, I talk about the trauma and years of therapy. Racial trauma is no different than sexual or any other type of trauma. It lives within us.

Is there tremendous racism in the music business?

I wouldn't use the word "tremendous," but racism exists in every aspect of our lives. I watch the news and people finally say "white people," "Black people." We were so walking on eggshells. It's no different from racism against Brown people or the LGBTQ community. It's about time we have the social courage to speak up, speak out, and speak against homophobia and racism.