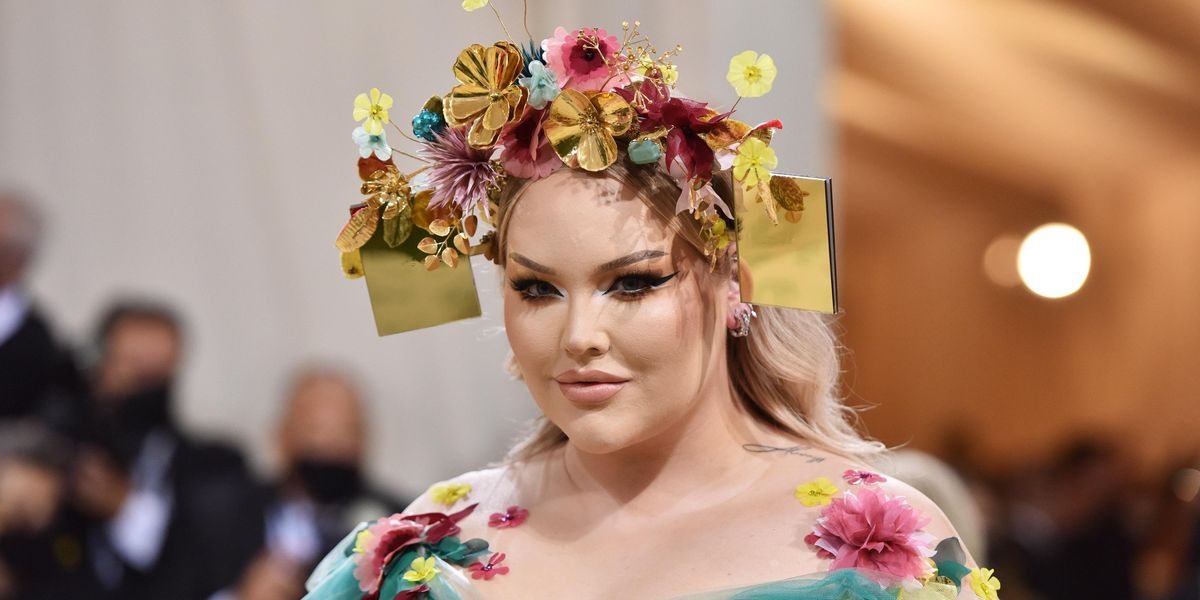 Beauty YouTuber Nikkie de Jager's (AKA NikkieTutorials') debut at the Met Gala this year brought about an important tribute with her dress that honored transgender activist Marsha P. Johnson.

Hitting the red carpet in a teal couture gown by Edwin Oudshoorn and beautiful headdress, both decorated with different kinds of flowers, de Jager's ensemble also featured a striking bow that read, "Pay it no mind," the famous response from Johnson that she used when she was asked questions about her gender.

On Instagram, de Jager explained the dress, writing, "PAY IT NO MIND when I got asked to join the Met Gala (!!!!!!) I knew I wanted to pay homage to a trans icon who was at the forefront of the Stonewall Riots." She continued, "Marsha P. Johnson paved the way for so many of us, and I hope I made my community proud tonight this night has been so incredibly surreal.... I can't wait to tell you EVERYTHING!!!!!! WE DID IT GUYS!!!!!!!"

De Jager came out as trans in 2020 on YouTube, telling her viewers, "[I'm] finally revealing a part of my life that has made me who I am." She continued, "When I was younger, I was born in the wrong body which means that I am transgender. Now, so surreal saying this. Filming this video is scary but it feels so liberating and freeing."

Johnson, the trans activist that Jager referenced through her dress, was one of the prominent figures in the 1969 Stonewall Uprising — a series of riots by the LGBTQ+ community in response to a police raid at New York City's Stonewall Inn.

After the riots, Johnson's activist efforts helped to change the world for members of the trans community. She created the Street Transvestite Action Revolutionaries group in 1970 with Silvia Revera to help homeless trans youth in NYC. She was also an AIDS activist for seven years starting in 1987, before her body was found after a 1992 pride parade in the Hudson River.

De Jager visited the location where Johnson was discovered during her NYC visit, leaving behind a bouquet of flowers. "This was the place she was found," she wrote on Instagram. "I hope I made you proud."

Johnson's impact on the world cannot be understated. There's a mural of her in Texas that features Sylvia Rivera and a monument of her went into production back in May of 2019 in Greenwich Village at the site of Stonewall. Last year, the East River State Park in Brooklyn was renamed in her honor, and her hometown of Elizabeth, New Jersey erected a monument in her name.