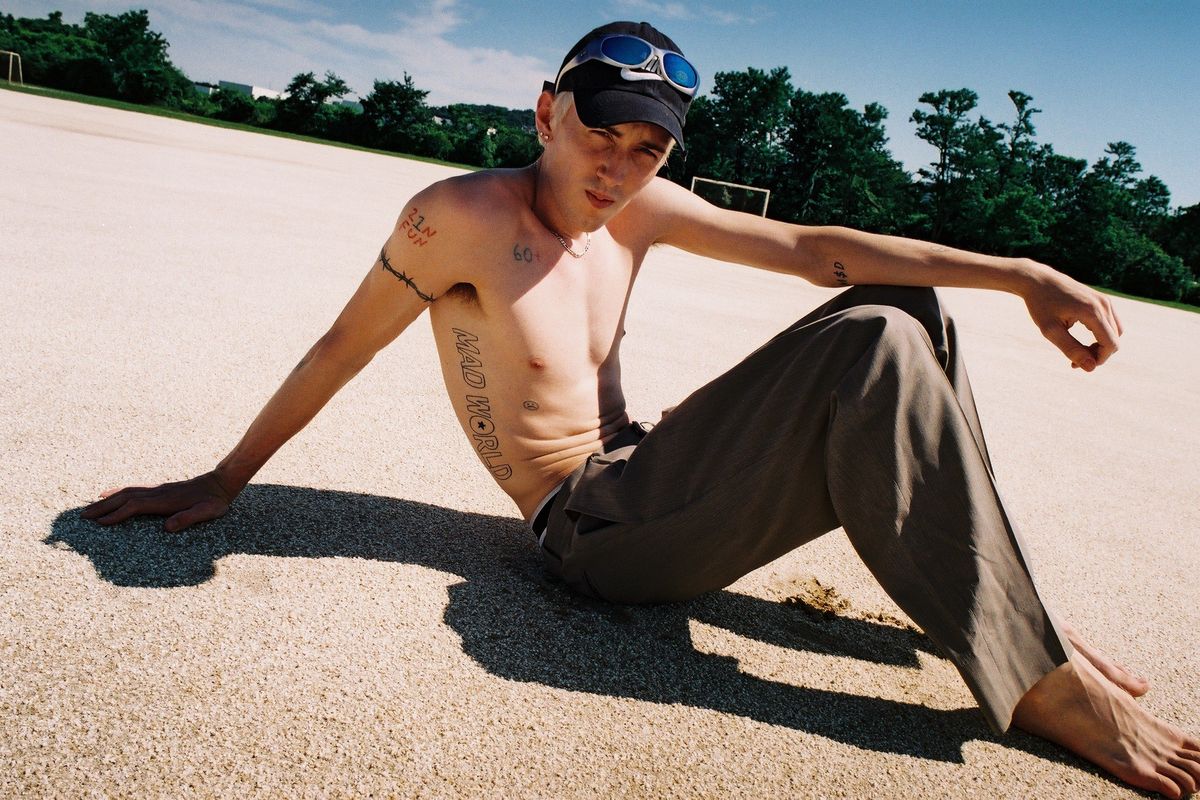 "In a mad world, only the mad are sane."

One of the most enduring quotes from Akira Kurosawa's critically acclaimed adaptation of King Lear, 1985's Ran, the sentiment has never felt more prescient. It's a film about an old Japanese warlord stepping down from the throne and dividing his kingdom amongst his three sons, in turn kicking off a bloody power grab as they turn on one another, plunging the land into a state of chaos and disarray. A meditation on the corrupting nature of power and humanity's tendency toward self-annihilation, it's hard to look at the state of the world in 2020 and not feel some sense of resigned nihilism.

Related | Kirin J Callinan Is Making a 'Return to Center'

It's the same quote that Tokyo-based, Sydney-born producer Mahne Frame takes the title of his debut album from and has tattooed down the side of his rib cage: MAD WORLD. Written during the peak of this past winter's devastating 2019/20 Australian brushfire season, MAD WORLD sees Mahne Frame responding to the chaos and turmoil caused by climate change and unfettered capitalism through the lens of youth.

Sounding like an Australian Bladee, Mahne Frame's long drawn-out vocals are dragged across icy industrial rave beats that give the whole record a cold and unforgiving atmosphere. A member of fellow Aussie Kirin J Callinan's band, it's not hard to see where Mahne Frame gets his warped sense of humor from. The record has its fair share of irreverent moments (the line "sometimes I try not to care/about cumming on your chest" delivered with the same twisted sarcasm we've come to expect from a Slowthai or JPEGMAFIA immediately jumps to mind), but it also has its fair share of profound and introspective moments as well.

On "LOVE," Mahne Frame contemplates a relationship with a deadpanned stream of consciousness, bouncing between wanting to break up and stay together forever as war drums march on in the background. It isn't until later on "LOVE REPRISE" that Mahne Frame reframes the track as being about more than a person-to-person relationship, with a clip that mulls over how humans are the only species whose absence from the Earth would have a positive effect. Thinking on both a micro and macro scale, Mahne Frame sees the connection between the chaos unfolding around us and our own inner turmoil, the ways they reflect us and vice versa. Sanity is madness and madness is sanity.

You've said that the album was written during the past winter's bushfires in Australia.Thought it might be good to kick things off with a check in about your perspective on the state of the world right now?

It is what it is — I think the question is: where do we go from here? It's now very very clear that we have the ability to fuck things up completely; so do we embrace differences and work together to make this place better or do we allow it to collapse into Mad Max. I love Mad Max, so I'm not just thinkin' bout myself here. I don't have the answers but there's people who do — David Attenborough, Van Jones to name a couple of people I've recently been inspired by.

What do you hope comes across with this record?

I don't really care how it comes across. But I'm stoked when it makes people feel good. My dream is to create music that energizes people, myself included.

One of the things that struck me about the record was the contrast between the more bright almost-EDM-y sounds and the more icy industrial atmosphere. What you would say informs your sound? What draws you to this kind of palette?

To be honest maybe high school, haha? I think a lot of the things I liked in high school got ingrained. The base of my fashion is kinda stuff I couldn't afford in high school too. I'm still working it all out, but I've realized that using developed instinct is good. I start a lot of tracks by searching for a sound that excites me and then I build a track based off that sound. That mix of chance and developed instinct feels like one of the few ways to create something fresh. Props to the people who make synth sounds, whoever they are? They defs deserve more love 💘

What was the inspiration behind the clip for "LOVE"?

Freedom and actual love. After being stuck in a small flat in Tokyo for six months I wanted to approach this clip with more freedom like how I make music — a spark or a concept can set my trajectory, but I rely heavily on being able to grasp moments as they appear.

"LOVE" itself is the only track I've written off raw emotion; the lyrics are really in the moment — the whole track came together in about half an hour when I woke up before my girlfriend. But I thought it would be more interesting to capture aspects of love visually with a friend. So the ideas for this clip were a mountain in Nagano, a love heart-colored Impreza, boxing gloves and my friend Kenchan. And I think we did capture a bunch of aspects of love — like disorientation, depth, euphoria, suspense, turmoil, beauty and relief — but to me it feels more like a documentary of our experience spending the whole night out there in the freezing cold. And it was defs the most fun I've had doing anything creative, so I'm planning to document more stuff.

What's the story behind the audio clip we hear at the end of "LOVE REPRISE"?

It's the most brutal dominant winner –– the "baddest man on the planet" –– growing older and realising just how significant human beings are. And that gives me a lot of hope.

What have you been up to under quarantine?

Missing my grandma in Australia and feeling blessed that I've had this project to distract me. But now I'm getting real impatient to start touring and bringing this music to real life people.