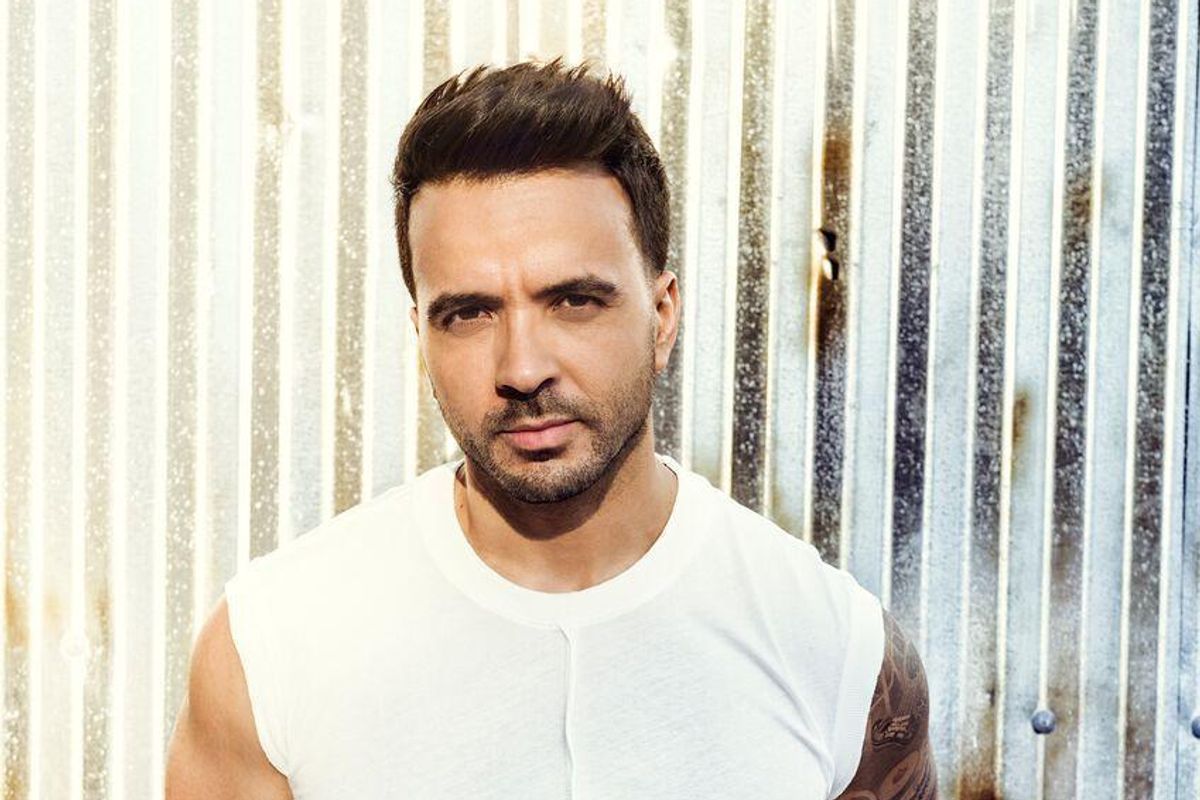 Luis Fonsi On Despacito's Crazy Success, Working With Justin Bieber and Getting to Know His New Fans

Latin pop star Luis Fonsi has been making music for nearly two decades, putting out nine albums in nineteen years to massive critical and commercial success. If he was a Latin American legend before, he's quickly becoming a global household name after his single "Despacito" was the first Spanish song to top the Hot 100 since 1996's endlessly popular "Macarena," (thanks in part to a surprise verse from Justin Bieber). Now gearing up for a European tour followed by a 20 city tour in the U.S., Fonsi is just starting to take it all in. We met with him before his show at the Copacabana in NYC, and five hours before set time there was already a line of women outside the venue, waiting in the hot sun to see their man perform. Soft spoken and humble, Fonsi reflected on his two decades in the industry, working with Daddy Yankee and the infamous story of how Justin Bieber found his song:

PAPER: So you've got this huge single blowing up, you're making music history. How's everything been these past couple of months?

Luis: It's exciting! From the second the song dropped, which was January 13th, we started getting all this feedback with all these people calling, and day two the song went straight to number one in all the digital stores and the video went to number one. From the get go we felt that we kind of hit the ground running. Obviously it started out with Latin America, which is my base, and little by little different European countries started checking the song out and it started becoming a big hit.

Fast forward to a month ago, after it was number one everywhere in Latin America and in Europe and already starting to get up in the charts in the U.S., and Mr. Justin Bieber comes in and takes the song. We were number nine in the Hot 100 with the original version, which was already huge for a Spanish song, and once Justin Bieber joined the party it went to number one. That's a huge accomplishment for Latin music, and we're really excited about it.

Can you talk about how Justin found the song and approached you?

It's interesting how it all went down. The song was released awhile back - I did it with Daddy Yankee, the song became a huge hit in South America, and Justin was touring in Colombia, in Bogota. He went out to a club one night and he heard the song - this is a true story! He heard the song and he heard how people reacted to it and sang it and he liked the vibe, so he called his manager who then called us. I was in Italy doing promo, and at three o' clock in the morning I got that call, "Hey can we send Justin the session for Despacito?" And I was like, "Justin? What are you talking about? It's three o' clock in the morning man I'm trying to get some sleep." He's like, "Yeah, Justin Bieber," and I was like, "Oh! Yes, hurry up and send them the session."

The cool thing about it was it all went down in the span of like five days. Day one I got the call, the next day he recorded, day three they mixed, day four we heard it and everybody approved, and day five we released it on iTunes. That's how fast it all went down. On Tuesday he went to Puerto Rico to perform and he brought me on stage. It hadn't even been a week. It was just meant to be. It was cool that he approached us, and it meant a lot that he wanted to sing the chorus in Spanish. Obviously as a Latino for somebody to take the time and get the pronunciation correct was really cool. I think people are surprised in a great way that he did that and he wanted to keep the essence of the original song while of course adding his flavor to it. I'm very grateful to Daddy Yankee, who is the original collaborator, and then obviously now Bieber. Working with these two guys has been a pleasure.

I'm sure it's hard to predict what's going to just pop like that, but did you have any sense in the beginning that Despacito would be something special?

In a very humble point of view, I had a sense that this song was going to be big. It had all the right ingredients. When you're cooking something and you get the best ingredients of everything, it's like, man, you can't go wrong. It's impossible to mess this up. So it had the right kind of hooky melody, the right production, the perfect lyric where it's edgy and it's sexy but it never becomes vulgar, it has a huge audience with Daddy Yankee, and I hadn't released anything for three years. I don't want to say it was a comeback, because it's wasn't like I disappeared, but when you're away from the stage for three years and you come back, your fans notice. Everything on paper was positive; it had the right amount of pop, urban and Latin flare.

But from there to what has happened is way beyond my expectations. I'm an optimistic guy, and I thought, "This is going to be good, we might have a number one song." But we're going fifteen weeks on the Latin chart, and it doesn't look like it's going anywhere, and we're number one on the Hot 100 and number one on Spotify. No Spanish song had even cracked the top ten on the global list on Spotify, and we've been number one for 3 weeks. We're averaging eighteen million views a day on Youtube. Nobody has ever done that, not even Adele with "Hello." So we're breaking all kinds of records, and of course nobody plans that. It was an amazing surprise.

Does it change anything for you in terms of the projects you're working on or your touring schedule?

It's definitely filled up my schedule a lot faster than normal. Despacito was the first single off the album, most of which was done last year. So the creative part was mostly done. The songs are there and the album sounds amazing, but now obviously it's such a big song. Normally I would be touring in Latin American countries and Spain - pretty much anywhere that they speak Spanish. Now, I look at the schedule and we're touring in Italy, France, Switzerland, we have a show in Indonesia, we have all these amazing countries where Spanish is not the first language but somehow this song has connected with people. So that has been the biggest change and the biggest surprise as well.

That's so exciting. You've been making music for a long time and have nearly ten albums out.

How have things changed in the music landscape over that time?

They've changed a lot. Obviously on a personal level, I've grown up. I started making music very young at seventeen, straight out of school. I went to college, I got a music degree at Florida State, and I released my first record in 1998. It just kind of took off from there. I started in the late nineties and the beginning of the year 2000, and things were kind of, I call it the Swedish pop sound, more in that boy band era.

It was a fairly good time for Latin crossovers too, wouldn't you say?

Yeah, absolutely. Every album has had its own sound too, my first album was very R&B 'cause that's what I listened to at the time, you know Brian McKnight and stuff. My next album was more pop, I recorded it in Sweden, and just sounded very Backstreet Boys, you could say. And then little by little I started being more of a singer songwriter, the older I got, it just started sounding more like a pop rock album. I did a little bit less dancing and picked up my guitar and it sounded more like a band. Just a little bit of edge, still had a little bit of romanticism and dance stuff - every album had its own thing. My last album was made in London, and it's more organic. It sounds more like a live record. This album is more of what Despacito sounds like. It has more a Latin, urban thing, but it's still pop. I think it's cool, that's what I love to do, every album just give it a different sort of dressing if you will. A different vibe. It just depends what I'm going through. I like to push myself and reinvent myself every single chapter.

Totally. Where is your favorite place to perform?

It's impossible not to say Puerto Rico. That's both the obvious and the truthful answer. It's where I get the most nervous, the most anxious.

Because it's your hometown?

Yes, I was born there and I left when I was ten. Then I moved to Orlando where I lived until college and then I moved down to Miami. So when I go to PR, that's where it all started. Not only as a kid but also as an artist. When I released my first album I moved back there, and just driving by the arena and the theater you look at it like, man, one day. So finally when you get to do it, when you get to do amazing things, you still have that respect. And the people that've seen you grow up are there, so that's always going to be the most special place. There's no country that's better than the other, but Puerto Rico will always have a very special place in my heart.

Your family must be excited about everything that's going on.

Yeah I think we're all in the same place of, let's keep our feet on the ground, let's stay humble about it, let's just grind. But every once in awhile we're like, "Can you believe what's going on?' You read the articles and stuff and the comparisons it's like, no song has done this since then, or no song has ever done this, it hasn't really sunken in. It's almost too early. We were talking about it at lunch today with the people from the label that it's like, you almost need to just keep going forward and maybe later this year sit back and be like, "We made history." But I'm not there yet, I'm not ready to celebrate it. I'm in go-mode. There's a huge new audience that's getting to know me with this song, it's sort of like I'm a new artist all over again. And I love that. And I love the fact that this tour, I'm going to be able to do stadiums, arenas, and clubs. Today I might do a stadium with thirty thousand people and tomorrow I might do a club with a thousand people. And that's cool, to kind of keep you humble. I go to countries where I'm performing for the first time and countries where they've known me for nineteen years. It's cool.