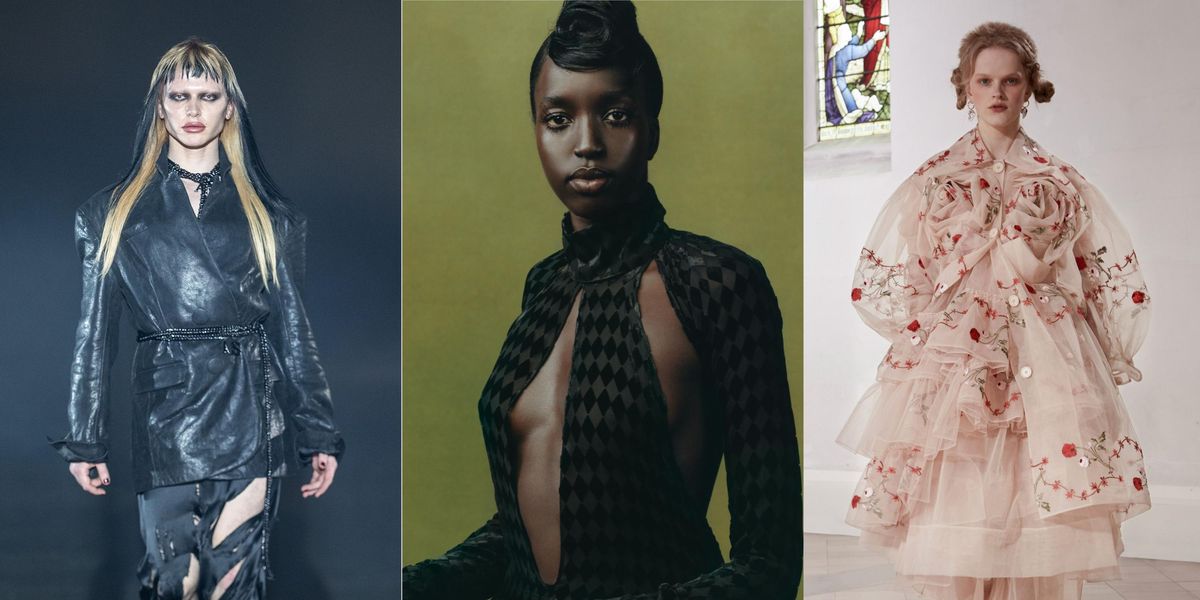 London Fashion Week's reputation as a hotbed for young designers and unbrindled creativity continued for Fall 2021 amidst an ongoing lockdown and the backdrop of Brexit. The all-digital showcase highlighted the city's once-emerging talent who are now fully established in their own right alongside the next generation of new multicultural creatives.

Designers explored key themes this season such as escapism, healing and heritage in their latest collections as part of the British Fashion Council's newly gender-neutral approach toward the bi-annual event. See below for some of the biggest highlights from London Fashion Week.

Eden Loweth of Art School said "Gay Rights!" this season by casting diverse, dystopian runway featuring the most fashionable contestants from Seaon 2 of RuPaul's Drag Race UK : Bimini Bon-Boulash and A'Whora, who sport a power-shouldered leather blazer and a loose-fitting slashed coat, respectively. The inclusion of the drag stars relays the message of resistance and strength to London's queer communities.

Riccardo Tisci's first standalone menswear show for Burberry was staged indoors at the brand's flagship store on Regent's Street complete with a maze of blocks in different heights. Models walked around carrying sleeping mats and umbrellas while dressed in utilitarian boots and animal-kingdom patterns. The collection featured mix-and-match faux furs, geometric shapes, pleated skirts, sweeping fringes and military-inspired details — all escapist references that call for an adventure in the wild, while paying homage to the brand's British roots.

Maximalism meets punk in Molly Goddard's runway film that delivers a loud message: it's time to get dressed up again. After spending a year working from home, Goddard's signature tulles and exaggerated shapes got even more experimental: against the Baroque piano backdrop, oversized skirts in buoyant color palettes move in harmony, as viewers right away feel the collision of shapes and layers, patterns and textures.

Dame Vivienne Westwood traverses the form-fitting aesthetics of the 18th century and designates the 1743 Greek painting "Daphnis and Chloe" — a tale of lovers raised by shepherds in nature — as the staple of her latest medley. With fabrics and colors emulating its pastoral sceneries, the artwork's print is reflected through denim, dresses, suits, shirts and corsets. A sense of classicism pervades throughout while clashing with Westwood's signature brushstrokes, drapes and tailoring.

Xander Zhou's Fall 2021 collection this week might be the closest rendition to a real-life Black Mirror world. Winding his way into the cybernetic future of menswear defined by utilitarian, functional aesthetics, Zhou completes his ideas with unorthodox, high-tech materials. In his android-wear, he delivers acupuncture-point jumpers, 3D synthetic neon-leather helmets and a uniform suit that changes color based on the body's temperature (named HUMANoidWEAR).

This year's recipient of the Queen Elizabeth II Award for British Design is Priya Ahluwalia, a Nigerian-Indian designer whose craftsmanship and sustainably-minded designs have been some of London's most impactful. Her latest collection, titled "Traces," is all about capturing the spirit of brotherhood and unity

Maximilian Davis' second season with design incubator Fashion East sees him evoking a sense of retro future nostalgia that elicits the sexed-up reading of swimwear and the poise of eveningwear: high-waisted clothes for disco-dancing fused with Swinging Sixties' psychedelic graphics, seamlessly tailored wool coats and jackets in sculptural yet figure-hugging forms — another ode to his Black roots while reclaiming his heritage with couture signifiers and references.

Ballet is the centerpiece of Erdem's Fall 2021 presentation, with actual ballerinas enlisted to model the luxury comfortwear. But through a subversive twist, knitted cardigans and leotards are transformed into essentials like body-con tops and pleated skirts, and ribbon-tied ballet slippers are reimagined as stiff platforms. While the color palette is more muted than usual, Erdem's dressed-down ensemble is adorned with sparkling jewelry and all-over florals. The catwalk, on the other hand, mirrors an opera, and if you look closer, hints of Martha Graham can be spotted in secrecy.

Simone Rocha delivered a kind of punk femininity this season unlike we've ever seen from her before. Tapestry dresses, inflated sleeves and hand-embroidered silks are adorned with 3D creeping roses as seen in the gauze volumes of her sculptural, hourglass silhouettes, or the suite of tough leather punk-rock looks that includes a classic biker jacket and some platform boot-sneakers. A visceral narrative of a punk-rock princess who grew up in a thorny garden is told in Rocha's virtuosic hands.

Menswear designer Daniel W. Fletcher's debuted his first women's collection this season after experimenting with it loosely for the past few seasons. His equestrian and militarian selection of monochromatic separates — in black and white only — seems risky, but he knows he's got the right customer. After all, the collection is inspired by two faces of the British culture: Princess Di and Spice Girl Geri Halliwell; it is the product of the heightened '90s. From the contrast stitching to slim-fit denims to double-breasted jackets, Fletcher seems to have grasped a hold on the future of his womenswear. (The lookbook stars TikTok twin sensations Maddie and Margot Whitley.)