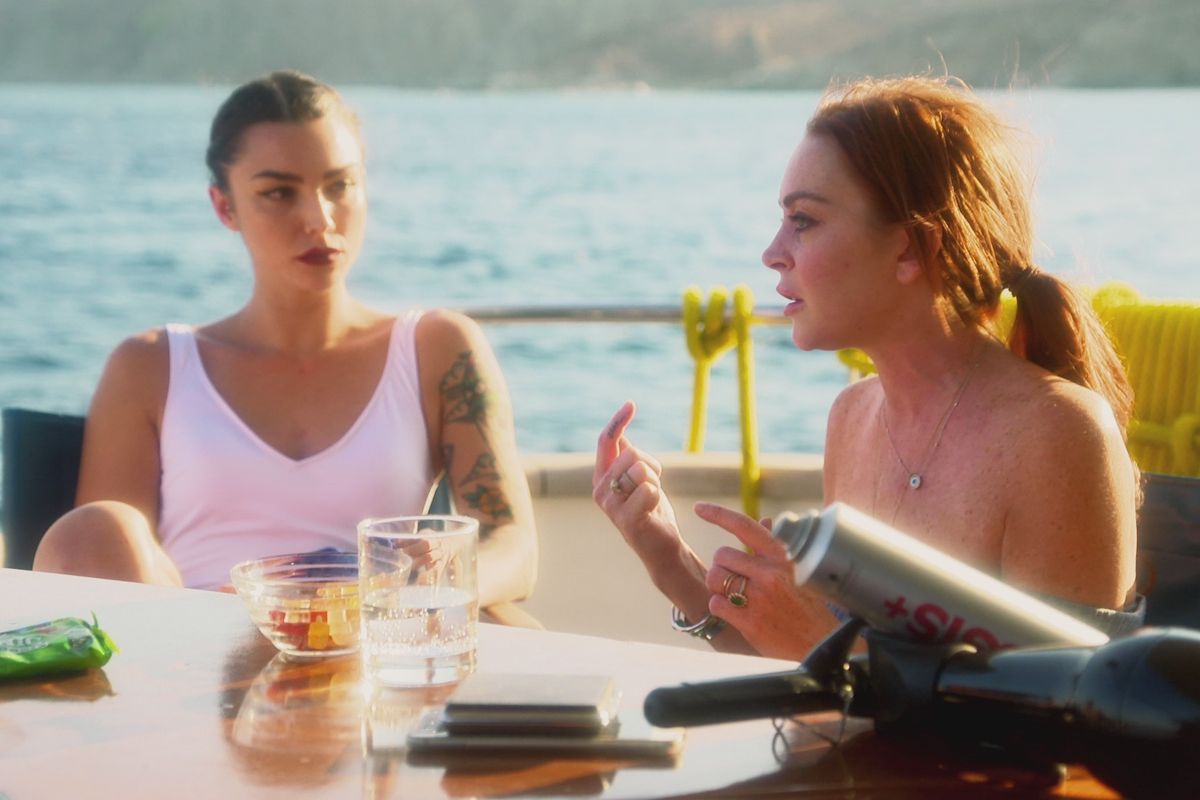 It's episode seven of Lohan's Beach Club, and I feel like I've been imprisoned on this beautiful, evil island for a decade. When will Lindsay let me leave? Soonish — we're officially more than halfway through the season. Even though, by the show's own timeline, the Beach Club hosts have only been living and working on Mykonos for two weeks. More on that later!

Last week, let's recall, Lindsay and Panos made a "branding decision" to fire May. Lindsay also pardoned a lobster, which was unfortunately already dead. This week, we open with sad music as May tells her fellow host Sara that she has been let go. Brent, Sara's on-off lover, comes over. He thinks May has been rightfully fired, but is sympathetic anyway. A confession: I'm enjoying Brent more and more these days. I look at him and I see a kindness in his eyes. The show was trying to frame him as a villain for a while there, but they've clearly given up on this as well as everything else, allowing a different sort of dude to shine through.

As news about May travels through the group, no one seems particularly upset. "I'm not surprised, because she's such a weak person in my eyes," says Kailah. Incredible and uncalled for viciousness from her, as per usual.

Jules says she's relieved because with May gone she'll have the opportunity to spend more time with Lindsay, learn from her about the art of branding, "maybe start my own makeup line, jewelry line." What?

We move on to the next group drama, which is Brent and Sara's fight from an episode ago. They're still upset about it. I've decided I ship Brent and Sara, two vapid fools who are nonetheless cute together. ("I'm very mature and Brent is not," says Sara, inaccurately). Even though Brent is stupid and ridiculous and has bad hair and probably smells strongly of drugstore cologne, I feel he genuinely wants to be a good boyfriend to Sara. He's a textbook example of how straight men are stupid, and pride often gets in the way of them saying how they really feel. Think of Brent as a vodka-soaked Mr. Darcy, swimming in the waters of Mykonos rather than the ponds of Pemberley. Instagram thots may throw themselves at him like so many upper crust London society girls, but he only has eyes for Sara, a lowly waitress from Los Angeles.

Sorry, this show has truly eaten holes in my brain.

Now May is doing shots with Panos! He's all "you're leaving tonight" in a stern voice, but then "let's do another shot!" I wish we got to see more of his party habits. In some alternate universe, on a show less confused than Lohan's Beach House, he is fun and camp rather than maniacal and ruthless.

Lindsay comes out of nowhere and hugs May. She takes her hand and leads her into a private room. Oh no. Oh no, no. Some of Lindsay's new age training is about to be put to use, and I don't like it. Lindsay says she sees "desperation" in May's (eternally blank, so blank that it actively freaks me out and I have to look away) eyes. May senses she can manipulate the situation and starts talking vaguely about a troubled childhood. LiLo takes the bait. "TELL ME WHAT HAPPENED," she demands.

​We flick back to Alex's random coming out story line from last week. He visited his grandmother on the mainland, taking Gabi and Aristotle along for the ride. The trio reveal their trip was three days long? I'm making a conscious effort to stop complaining about continuity errors and timeline issues so much, but geez. That makes absolutely no sense.

Did you see this coming? Lindsay is now telling May she isn't fired after all. Perfect. Wonderful. May is "very grateful." Lindsay does carefully bring the conversation back to her favorite subject, branding. "You need to think very carefully about how you want to represent me," she tells her. She calls May a kindred spirit. True: they're both super messy.

Panos is annoyed, obviously. He thirsts for blood. He says they have to fire someone else instead, which doesn't fit in with the lore of this show, which so far has been "the more hosts the merrier." Although I think it would be fine to be let go from the beach club. The job is presumably minimum wage. The hosts have had some good times at the beach with their terrible roommates, accrued some good Lindsay Lohan stories to sell to TMZ down the line. Going home wouldn't be the worst thing.

The hosts are now being interviewed one by one. They must beg to stay. It looks like Jules, who was singled out as a bad employee last episode alongside May, might be the one to go. "Jules is too lazy to be here," says Lindsay. "She's boring." "Her personality is flatlining," Panos agrees. From my observations, Jules is fun and hot and beloved by her fellow hosts. To be honest, this is likely the actual issue. Lindsay expressed fears last week that Jules "looked too much like a model" and was clearly threatened.

Jules is understandably shocked to be fired. Mikey, her sometime hook up, comforts her. Ah, none of this makes any sense. May returns to the group and announces she gets to stay, and all hell breaks loose. "You're the worst at this job, why the hell do you get to stay?" asks Mike. "I don't understand how Lindsay is making these decisions."

If only they'd unionized like I told them to.

May breaks the news

As she gets in a car to drive away to what I hope is another party island, Jules unbelievably adds that she has learned more "in two weeks here than in my whole life." TWO WEEKS? We get a fun montage of Mike talking about how much he loves Jules. Then a random shot of a black and white cat drinking out of the pool.

Now Alex, Gabi, and Aristotle are arriving back from their three-day adventure. Everyone fills them in about the drama. They are all annoyed that Jules is gone instead of May.

We do the normal morning meeting thing. Everyone looks hungover as usual. The sun is bright and shining, though. Greece seems so nice. Brent, Sara and Kailah are assigned to look after today's VIP guest, who has young children. Sara and Brent explain to Panos that they're no longer dating, which pleases him, as he hates joy. "I ended the relationship for job security," Sara explains.

Brent is playing with the children. It's sweet. In a moment of vulnerability he tells the camera, "I like kids, I want three kids." He then looks away shyly. BRENT. Sweet, stupid Brent. I was wrong about you.

Sara is clearly turned on by his daddy side, and they catch up back at the house to talk about their relationship. Brent is sipping from a glass of red wine and wearing a pink sleeveless tee. He gets vulnerable, talking about being bullied really badly in high school, and coming to terms with his grandmother's death. He starts crying, and Sara comforts him. It is a sweet moment, ruined by Brent's slightly creepy promise that "I plan on treating you like I treated her." "Her" is the dead grandmother. So much unnecessary grandmother talk on Lohan's Beach Club. They kiss.

It is the next day. The morning meeting. Panos explains that a bachelorette party will happen later on. May is eager to prove herself, to both Panos and her roommates. Panos and Lindsay make an extremely rare appearance together on camera at the same time, talking about how they want to give May a second chance. This ends with Panos saying he "understands" Lindsay and agrees with her decision to unfire May. He then kisses Lindsay's bare shoulder. Our bachelorettes arrive. They're very "squad goals." Very "chilled rosé."

While the hosts deal with a drunk bridal party, Lindsay decides to take Brent, Kailah, and Kyle for a trip on an enormous yacht that she apparently owns, and which we have never seen before. She cooks for them a confusing dish featuring tomatoes and corn chips. She loves to cook because she's "very Italian."

While Lindsay plays hostess, Kyle, who never gets any screen time, faces off with Brent. He thinks Brent should lay off May, which he basically has been? I'm such a Brent apologist these days. Kyle hates drama and laments the fact everything has "become a competition."

"It is a competition, though," says Kailah. No, it isn't! Or at least not one with clear rules. Until earlier this episode, no one even had any idea it was possible to be sent home from the island. Also, there is no prize. There is only "branding."

Lindsay overhears this chat and is annoyed. "It's not a competition," she helpfully clarifies, only seven episodes in. "You're just here to work for me." Lindsay then decides to use her unconventional conversational skills to find out Kailah's "true motive" for coming to the Beach Club. She quizzes her about a boyfriend back home and then speculates that Kailah has a grand plan to bring him to Mykonos and... let him take someone's job? This interaction is blindingly awkward. Kailah is caught in a weird spot where she can't antagonize Lindsay, for fear of being fired, so just has to sit there and agree to an insane conspiracy theory.

Speaking to the camera, she describes the experience as "frustrating" because Lindsay has all these "scenarios in her head" and "has no idea what's going on." It's subtle but noticeable that the show has turned against Lindsay. They're letting more criticisms of her come through, and filming deliberately strange and unflattering scenes that portray her as unhinged.

Back on shore, May is finally doing a good job. We see her partying with the bachelorettes, as Panos watches happily. She even gets a drunken invite to the wedding. "Maybe Lindsay made the right choice," he says.

The yacht returns, and Kailah remains angry. She's complaining more about Lindsay to the other hosts, and calling her "bitter." She then Facetimes her dad for advice. He tells her to tell Lindsay to "shut the fuck up."

"Next time she's talking out of her ass, I'll call her out on it," she promises, semi-ominously.

See you next week for more shamelessly manufactured beach drama!