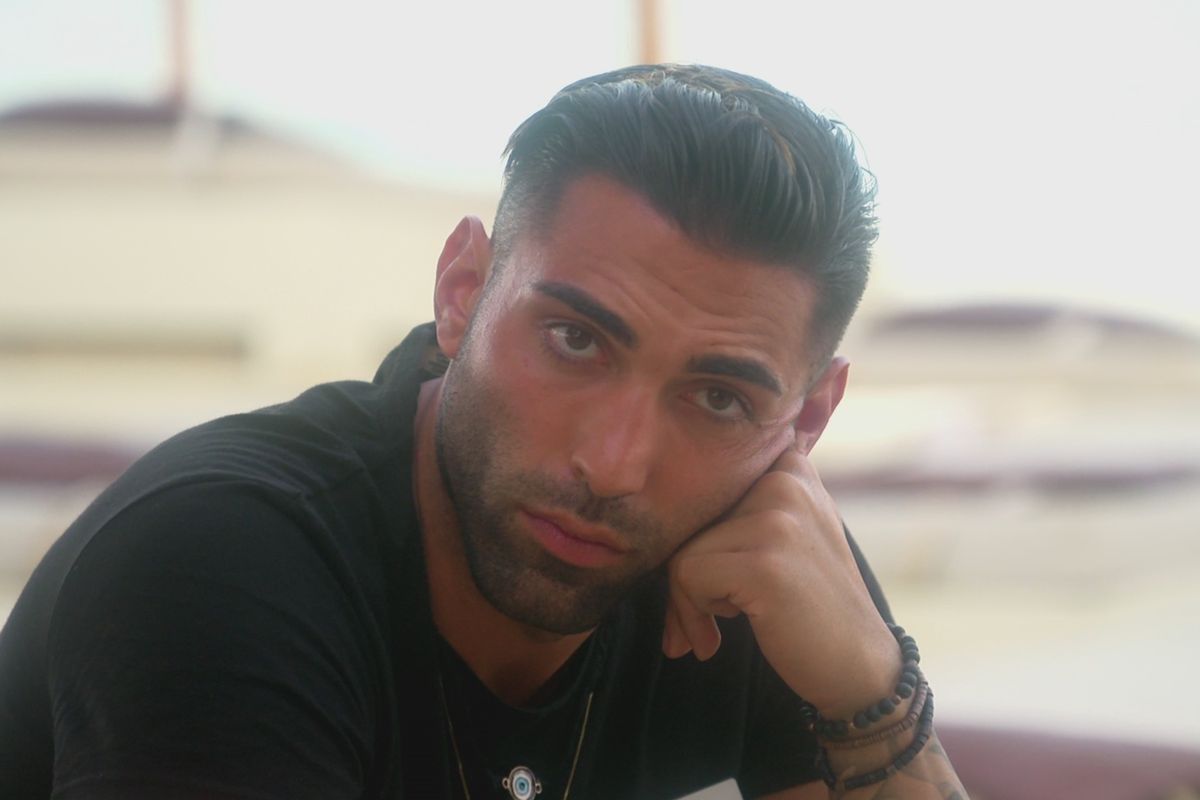 Welcome back to the world's saddest beach party! Last week Younger actor Nico Tortorella tried and failed to spiritually heal a spiritually unhealable cast, then Brent wore eyeliner and ignored Sara at a party, which she understandably found rude. Now Billy is now moving in on Sara, and working with the other cast members to try and get Brent fired by Panos and Lindsay. The tension is building, but you know what? I'm willing to bet producers will be unable to capitalize on it. I've been burned before. This show wouldn't dare be entertaining for more than 20 minutes at a time.

Sara opens the episode telling the camera she's excited to be single again. Then we see Brent getting annoyed because he thinks their break up is unfair. Jonitta helps Sara move out of her and Brent's shared bedroom, loving the drama as usual.

Everyone heads to the morning meeting, where Panos is annoyed about all the torrid love affairs that are distracting from sales. Today's client is a good friend of Panos who "spends a lot of money." His name is Enrique. We see photos of Enrique wearing sunglasses and doing some standard influencer poses.

Another announcement: Lindsay has decreed all the hosts will spend tomorrow doing a team building exercise group hangout. They do this all the time! They live together! But sure. Lindsay comes on screen to clarify: "At the end of this summer, I need to know which hosts are worth bringing back to work with me, here or at the club in Athens."

OKAY. OH MY GOD. FINALLY. The actual overarching structure of this show has, just like that, become clear? Ten weeks in, Lindsay casually reveals what everyone's competing for — further Lohan-related employment opportunities. Please feel free to re-watch any of the nine previous episodes — literally nobody has clarified this point up until now. In fact, several times Lindsay and Panos have emphasized that the hosts aren't in competition with each other.

Lindsay also has an actually-insightful observation about Brent that I can't help but agree with. Brent is a bully, she admits, but that's probably because Brent himself was bullied in the past. Definitely true.

Enrique arrives. He has three friends with him, also in sunglasses. The boys gather around, shirtless. I can tell this is all we're going to see of Enrique. Why must we see the hosts work at all? It's so dull, and the producers are clearly aware of it by now.

In another cabana, Billy makes his move on Sara, while Brent watches sadly from a distance. "He looks like a turtle," he says, of Billy. Then admitting: "No, he's hot, I don't know why I said that." Oh, bud.

Lindsay confidently says the team building day will solve all of this. She's lending them her yacht. I'm worried.

"I've never been on a yacht before because I'm broke and I'm trash," says Mike, in his usual low-key devastating way. Remember how he admitted he was manipulated into doing sex work at age 14?

It's the next day, and we're boarding the yacht. Mykonos really is very beautiful, to be honest. That blue, blue water. Damn. Everyone's excited, except for Brent. "We've got Gabi here, Mai, and all the other losers, except me," he says, assessing the situation. He's hurting so bad. This poor tortured twisted caricature of frat boy masculinity!

The hosts lounge around drinking on the yacht, kind of like how they do at home and in every second scene of this entire show. I wonder if anyone will get pushed off the boat in anger? If I were an MTV producer, I'd make sure of that.

The drinks begin to flow. Back on Mykonos, Lindsay is more lucid than usual. She hopes everyone is having a good time. She's wearing her special silver red carpet dress, in daytime — very Sunset Boulevard. I love my deranged queen.

It's confession time on the yacht. Everyone is admitting that they've been drinking a lot to cope with the awkward situation of being on a Lindsay Lohan reality show. Fair enough. The boat arrives at a rocky shore and everyone jumps into the water and swims around. Happy music plays, but Brent still sulks in a corner, drinking by himself. "I have so much going on in my head, my thoughts are all over the place, I want to take it in and process everything," he explains. Everyone else just laughs and takes selfies.

Here we go — Billy and Sara have found a private lil spot to talk. Listen, Brent has his issues, but Billy's no angel either. "Every time I speak to women I just like to compliment them," he explains to the camera. "People call me a womanizer. I don't think that's a bad thing."

Sara tells Billy she regrets spending her whole summer with Brent, especially as they've only got "a couple of days" left. I'm pretty sure last episode they said she and Brent had been together two weeks. Continuity errors, as usual. Almost comforting in their familiarity, at this point.

"We'll see what happens," Sara tells Billy flirtatiously. "Ball's in your court," he replies, brazenly undressing her with his eyes.

Eventually Aristotle and Mike begin to feel bad for Brent. They go over and talk to him, try and re-integrate him into the group. He's defensive and pretends like he's okay. Man, you never want to be the Brent in any social situation. That's the truest lesson of Lohan's Beach Club.

Brent says he's in "a dark hole." He watches as Sara and Billy get closer and closer. They're taking selfies, touching, smiling, laughing. Aaand there it is — they're making out. Brent is right there! Ouch. Everyone else simply cheers them on? These people!

​Brent retreats to the cabin and curls up in a bed, turning away from the camera. Even a fun yacht cruise around the Greek islands, this show can make incredibly dark! It's skillful.

Now Alex and Sara are kissing as a joke. Alex says he can "feel all her fillers." A fun detail.

While everyone's away, Panos and Lindsay decide to talk about who is going to go home and stay — because that's apparently where this show was heading the whole time, it just didn't occur to them to tell us. I'm so mad. Ugh. @MTV!

Back on the boat, Sara says she doesn't plan on getting serious with Billy because she's "an independent woman." Thank god — I was beginning to think we wouldn't get any #GirlBoss rhetoric this episode. Take a drink!

Meanwhile, Jonitta decides to visit Brent in the cabin bed. By the way, in this scene Brent declares that there are "five days" left before everyone goes home. What is the truth?

"I'm trying to understand where you're coming from," Jonitta tells Brent. "I'm going to break this shit down."

"I'll jump off the boat before I listen to you," he replies, but she keeps going — listing all the admittedly nasty shit Brent has done to Sara over the summer.

He runs away and she follows him. Okay, someone is definitely going to get pushed, right? Please. Brent decides to slut shame Sara for good measure: "I just slept with her two days ago and now she's with someone else? She looks like a complete idiot."

Jonitta tells him to stop talking about his sex life. She calls him disrespectful. More sad club music plays. "I want to go home right now," says Brent. "I'm packing up my things."

Everyone else continues to not feel bad for Brent. They are enjoying their yacht treat!

Back at the house, we see an actual MTV producer asking Brent not to leave. She doesn't get a name — she's blonde, and in crisis mode. "Please don't leave, can you sit real quick and just talk to me?" she asks."I need you to look at the bigger picture."

Brent is unresponsive. "Can I call my mom?" he asks. He dials the number. This is all so distressing.

"Remember the girl I told you about? I gave her a piece of me that I've never given to anyone and she kissed another guy in front of me," Brent tells his mom. The mom is all "Oh my GAWD."

"I keep dating these pieces of shit who I keep giving myself to," he continues. Wow.

In the kitchen, everyone else in the house continues drinking. It's definitely the answer.

The mom tries to advise solutions, to which Brent says, "Are you out of your fucking mind?" A charmer.

Panos arrives at the house — because that's what we need right now. He's heard about Brent, presumably from the nameless blonde producer. He gets on the phone with Lindsay who says she doesn't want to lose Brent, who is "one of our strongest ambassadors."

"Brent just needs a friend," she says, which is perhaps true. Lindsay is starting to make sense to me! It's Greek island Stockholm syndrome.

During a very uncomfortable house meeting, Panos tries to hear out everyone's grievances about Brent with his usual wide crazy eyes. Brent really doesn't make it easier for himself — he immediately starts complaining about the other roommates, who he says aren't as good at working at the Beach Club as he is: "I thought I'd be surrounded by people who are going to make me better." His fellow hosts respond poorly to the diss.

Panos knows that the other hosts want him to fire Brent, but unfortunately Brent is good with customers, and that's at the end of the day all he and Lindsay care about. "This business is about money," Panos explains. "And he has made the most money out of all of them. I cannot let him go because of this."

He ends the meeting by telling everyone to "be okay" with each other. "OH BY THE WAY," he says, already halfway out the door. "Leeeendsay and I just decided that we can only bring four of you with us at the end."

Boom. I actually kind of enjoyed that? There are two episodes to go — see you next week.