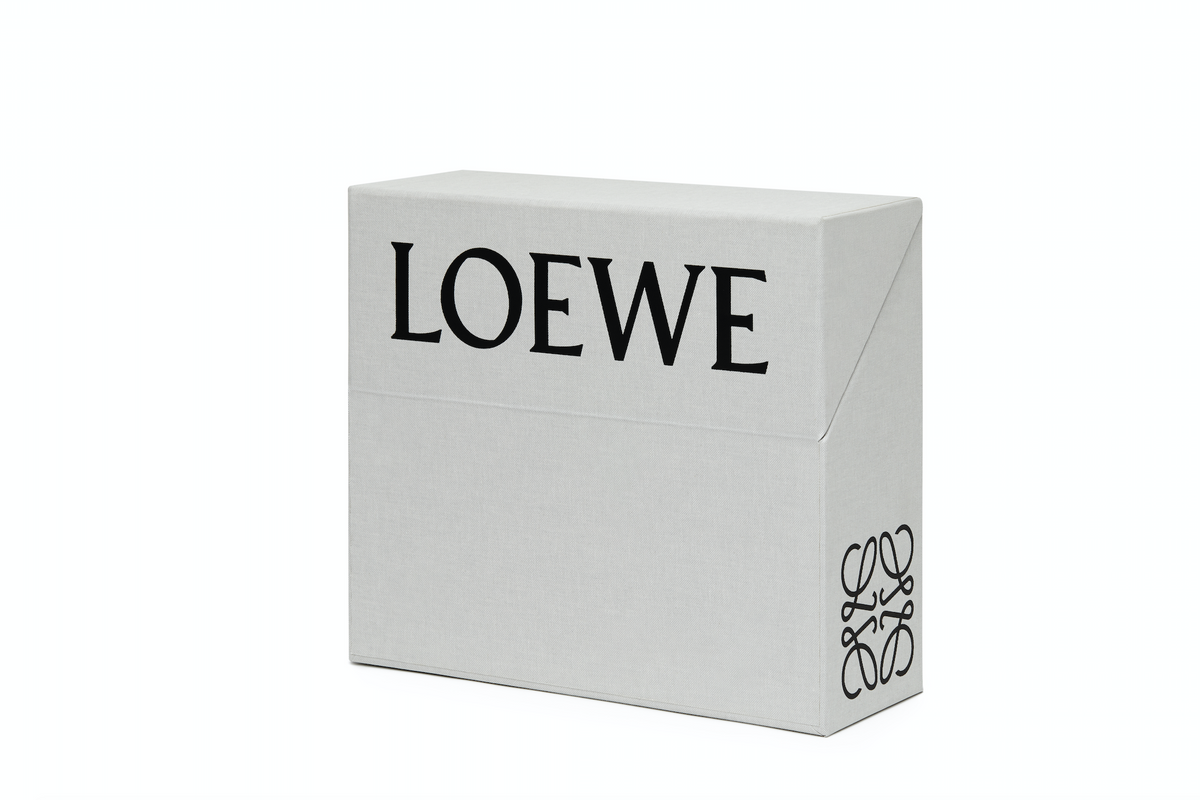 Over the weekend, it was hard to miss the ubiquity of a Loewe-branded box that spread all over Fashion Instagram™. Everyone from Bryanboy to Diet Prada had received the same gray canvas carton, which they shared with gusto all over their feeds and Stories.

Suddenly, a box had replaced a fashion show invite as the must-have ticket of the season. But delve a little closer into the box's contents and you'll find that it's much more than just another memento or fashion souvenir.

Jonathan Anderson, the Spanish house's creative director, had also played with this approach for his namesake line a week earlier. But for Loewe, Anderson linked up with the team at design agency M/M (Paris) to bring the "show-in-a-box" concept to life.

In lieu of a traditional runway show, Anderson opted to present his Spring 2021 men's collection through this unconventional, portable format. Inside, the box contained several dividers that housed things like a letter from Anderson, and inspiration booklet, paper block lookbooks and fabric cards containing real swatches.

Related | How JW Anderson Made Two Whole Collections Under Lockdown

There's also a pattern of a circle top that can be recreated at home, as well as cutouts of the Loewe design team. The show's soundtrack, meanwhile, takes form in a cardboard record plater that can be manually spun in order to function. It closes out by featuring a pop-up of an imaginary set and an invitation with show credits.

"The challenge here [was] to create something that's as tangible as a fashion show but in a format that's more in tune with how we're able to communicate right now," said the M/M team in a Loewe IG video uploaded as part of the brand's 24-hour virtual itinerary.

For this project, Anderson was inspired by American-French painter Marcel Duchamp's Museum in a Box experiment where he put all his work within a suitcase so that his work could travel all around the world. "We've imagined this as an archive box where you have all the looks, the accessories but also the music and you meet the team, the sets that allow you to understand how all of these together are like the elements that are helping to construct the collection."

The box ultimately served as a time capsule about where we are in this moment, they said, referring to the limitations imposed on fashion as a result of the pandemic.

"[It's] about being able to stay creative and to propose solutions and to distribute the same amount of work thats been put into every collection into something that's more appropriate and relevant to the time."