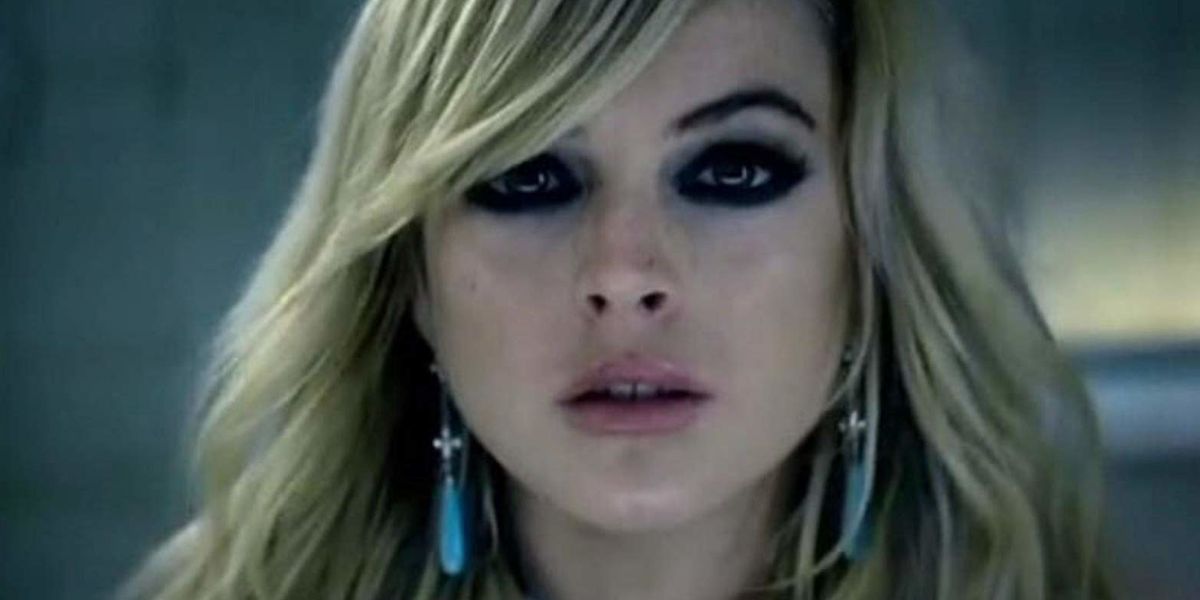 Our girl Lindsay Lohan has worn many different hats throughout her career, but her most important feat to date was a brief stint as a musician, releasing two albums that should've garnered way more attention than they ever did.

Her debut album, Speak, and killer follow-up, A Little More Personal (Raw), were both guilty pleasures that really brought us through the motions. Whether we felt dirty, dancing in front of our bedroom mirror to the club anthem "Rumors," or bawled for hours, blasting the tell-all track "Confessions of a Broken Heart (Daughter to Father)," Lindsay really appeased our emotional teenage years.

In celebration of her new MTV reality show Lindsay Lohan's Beach Club, we've ranked in descending order our top five music videos from Lindsay's distant days of being a pop star. But we're still waiting for that third album, Lindsay.

In the video for angry rock-pop track "Over," Lindsay stares at a neighbor boy from her bedroom window, wears too much black eye makeup, hooks up with said boy in a random trailer and cries... a lot. This video has a completely over-the-top dramatic ending with Lindsay doing donuts with the neighbor boy in a vintage car (amazing), only to be interrupted by his abusive father. Lindsay cries more, breaks through a window with her heel and shatters a lamp on the ground. Yes, Lindsay, yes. We love it when you're angry.

The video for "First" came out at the height of Lindsay's paparazzi heyday, when everyone was up in arms about her shocking platinum hair and frail figure. Way before Miley Cyrus was ferociously twerking to shed her Disney reputation, there was Lindsay taking on a sexier, edgier persona with the same intention. Watch Lindsay rock out in the middle of a race track, wearing a signature 2005 look — we're pretty sure you could find those sunglasses in any 7-Eleven now, but back then she was so on-point.

This was a classic Lindsay moment for her 2004 flick Confessions of a Teenage Drama Queen, highlighting her fresh-faced days before she was of-age to legally enter a club. In the video, Lindsay works through four life-altering outfit changes — the first look features low-rise baggy cargo pants (very 2004); in the second, she rocks an A-line dress that looks like a cat destroyed the hemline; the third ensemble seems to come straight from Missy Elliott's closet, and the last is all-American with a white tank top and jeans. Lindsay is very versatile.

When is the last time you fled a club from a helicopter on the roof? This video looks like an episode of Law & Order: SVU, featuring Lindsay scaling the walls of a club, throwing herself around a cage and killing some sexy choreography on a rooftop. Everything that's been released after this video is basically irrelevant — it's that amazing.

1. "Confessions of a Broken Heart (Daughter to Father)"

Lindsay really pulled all the stops with this video, which dramatically sheds light on her turbulent childhood. A young Lindsay — played by Ali Lohan — listens to her parents ferociously fight in the living room, while crowds of people watch and photograph the entire scene from the street. "I carry the weight of the world on my shoulders," moans Lindsay, crawling around the bathroom floor in a jeweled ball gown wearing pounds of black eye makeup. She throws a lot of things across the room, sheds pools of tears and grabs her hair incessantly. It doesn't get more intense than this.