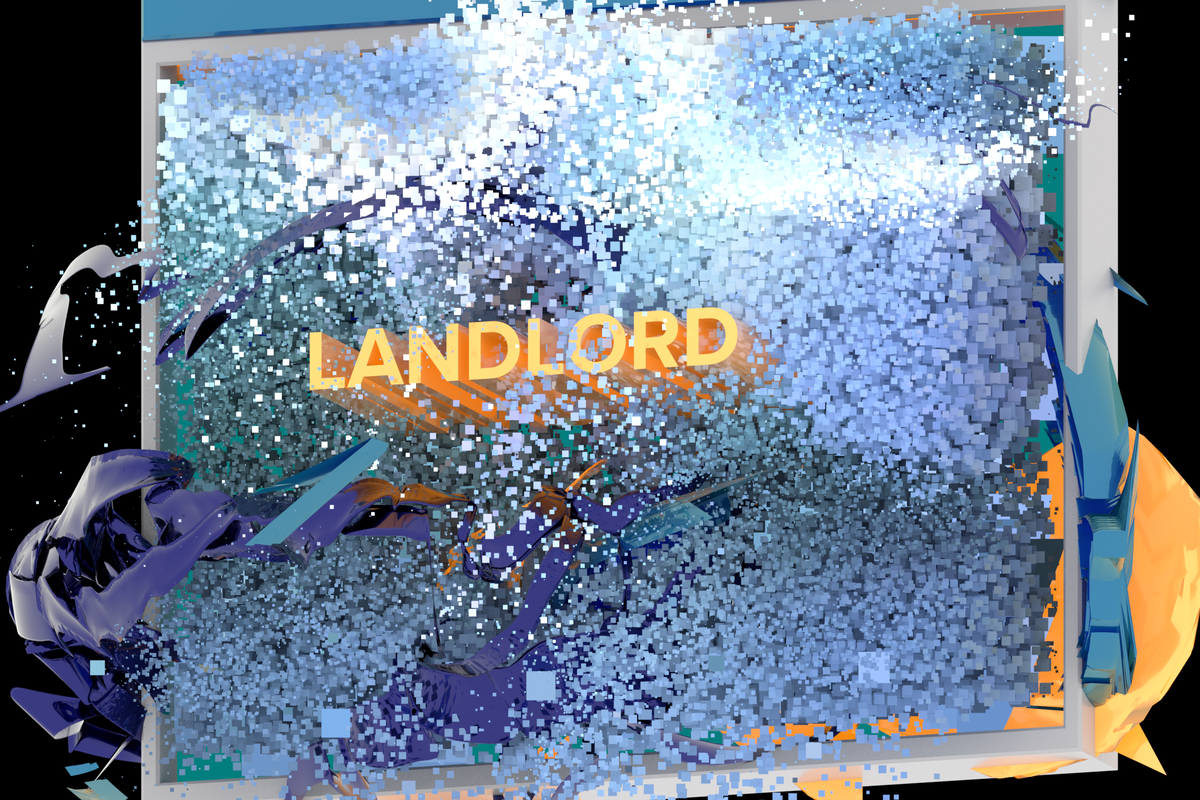 For the past few seasons '90s youth culture has maintained a firm grip on the runway. Landlord creative director Ryohei Kawanishi's fascination with that decade stems from being a part of the first generation to grow up with the Internet. In his spring 2019 collection — titled "Be Nice To Nerds" after the legendary Bill Gates quote — the Japanese designer mixed surf and skate references in a collection created entirely on his laptop via Photoshop and Illustrator (talk about committing to a theme).

To set the scene for his show, Kawanishi enlisted brothers and founders of design studio Team Rolfes Andy and Sam Rolfes to create visuals that whirled and cascaded on screens around the venue. In conversation with PAPER, the self-professed nerds geeked out about Window 95 operating systems, vintage surf and skate footage, and the insight needed to unify discordant design elements.

The theme for Landlord's spring 2019 collection is "Be Nice To Nerds." That must be incredibly relatable for you two.

Andy Rolfes: Being insufferably tech-bound artists, often consumed with the details of whatever new creative digital medium is popular for the moment, it's a theme we can relate to. Regardless of the medium, whether pixel or garment pattern, creating a compelling work often requires a deep understanding (to the point of nerdy obsession) of the mechanisms at play.

How long did it take to develop the visuals? Did you see the collection beforehand for inspiration?

Sam Rolfes: We developed the imagery for the show quite rapidly over the course of a week or so. Our conversations with Ryohei were in broad terms, primarily focusing on the inspiration behind the collection (rather than the garments themselves) to establish the essential movement and materiality of the animations.

AR: The graphics grew from the same visual soil as the collection, but developed separately. That said, during the show it was striking to see motifs similar toour animated treatment inthe collection; blocks of color ricocheting between the garments and video columns, dripping down both the video panels and the models' faces.

​How was Kawanishi's fascination with 1990s computer culture translated into these visuals?

SR: Our imagery was an attempt to re-frame the 90's Windows patterns that have become shorthand for obtuse, unapproachable tech (and the people who wielded them) into a more naturalistic and nuanced setting than might be initially expected. Our friend and mutual collaborator Finn Mactaggart suggested the skate/surf motifs as a baseline source material, which gave us a framework for the waves of movement we created toward that end.

What is the process of creating this movement like?

AR: Once we had the initial collection of concepts, we gathered the source footage to act as the driving motion for the waves of polygon cascades in the animation at the backof the runway.

We then tracked the motion of the surfers and skaters across each source video—which ultimately ended up acting as the root motion of turbulence for the pixel waves, slicing their way invisibly through the clouds of polygons. The Landlord team created 18 videos using Windows 95 pop-ups that we ended up using to develop the column cascades.

How did you land on a color palette?

SR: The odd green hues and blocks of blue and white are synonymous with old Windows operating systems. They kept the visual connection to the computer interface despite being continually washed down the column video-panels. The vintage surf and skate footage we gathered, which also influenced the hue of the poly-waves, was edited to fit that palette.

Did this process lead to any nerdy, creative revelations?

AR: A compelling thoughts that arose while working on this project was simply about harmony and naturalism. No matter how abrasive, performative, or stark the message might be, a deeply nuanced harmony must be established to transform these disparate elements into a striking message.

What can we expect from your next runway-related project?

SR:This time around it was refreshing to dive into more generative work that can organically fill a scene, rather than hand-painting a still or obsessing over every frame of an animation, as is more often the case.That being said, we're looking forward to utilizing our studio's primary skill set, live 3D-performance, next time we dress the runway — an occasion that'll require as much or more nerdery, but be significantly less well behaved.