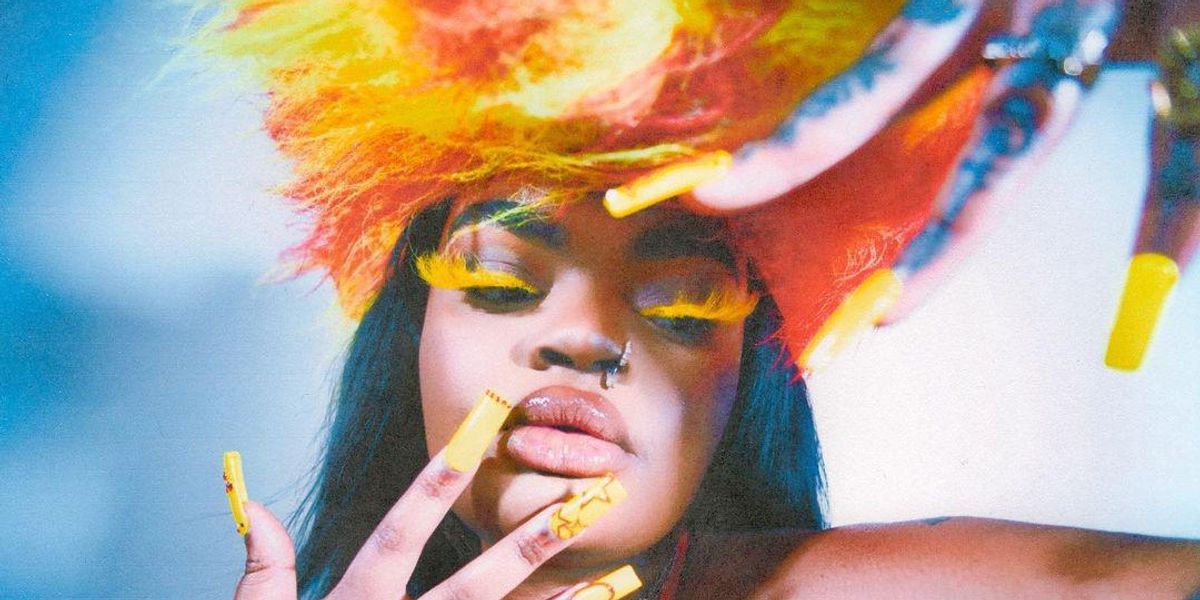 At just 22 years of age, Lauryn Brown's creative output has already included everything from DJing to contemporary dance, music production and modeling — there's even a cooking endeavor in the works. But it's Lamont, her self-funded accessories label of bespoke, hand-painted cowboy hats, that's garnered the most attention in recent months.

She founded Lamont in the late stages of 2019, the moniker itself derived from "Lamontine," a French Creole family name on her mother's side, through which she has produced an eclectic slew of extravagant headpieces soon to be made available for general online purchase.

Prior to launching Lamont, Brown's creative journey saw her hustling all over her native London. After spending much of her time at university studying music and technology, she went on to intern at Dazed, work at Topshop and finally a vintage retail store. Then, in between bartending jobs in East and Central London, she often found herself hustling to myriad casting events over lunch breaks in aggressive pursuit of a modeling career.

"This was a super busy period in my life," she tells PAPER over Zoom. "I had two jobs at the time. I was working one by the River Thames, and another was at this famous gay nightclub in East London. So I would literally finish my shift, get on the bus, go to work again until like 9 AM, and then come home at, like, 10. That was really, really crazy."

But when she would return home to her flat after those long work days, the remainder of her waking hours was often exclusively devoted to Lamont, which Brown started at the encouragement of a friend to make something that "blows everyone away" for a Boiler Room event the two planned to attend. It had been two nights of scouring through several fabric shops in the town to source inspiration when Brown stumbled upon an idea she liked.

"I was like, I think I'm going to try to make a cowboy hat," she says. "I got one, and I just customized the shit out of it. I was like, Yeah, okay this will do, because it matched this blue dress I had, and I was just going to freestyle it. I only had a couple of hours to make it before we had to start getting ready to leave. And when I finished it, I knew it was the best I could do."

Although she did not originally plan to participate in it at all, Brown's hats wound up placing second in an arts-based competition held as part of the night's festivities. Within 24 hours, several interested buyers had reached out to her via social media with inquiries surrounding their availability for purchase.

"I've just been kind of winging it," she laughs. "I have collections that I haven't even finished yet since, like, last year."

Although the general time frame her hats are usually constructed — a couple of hours — has not changed much since their Boiler Room debut, the level of autonomy afforded to the process has. She mentions that a major goal of hers is to make company products one hundred percent from scratch for sake of future affordability. As of now, though, the making process is still a tedious, multi-step operation that consists of creating fitted templates, sewing inner seams, preserving fabrics and manipulating eclectic forms.

It was her appetite for such a creative output that caused her to cross paths with the prolific Nigerian-born fashion designer Mowalola Ogunlesi. In late 2019, as the initial groundwork for Lamont was being laid, Brown visited a London pop-up exhibition curated by Ogunlesi out of admiration, taking several photos and videos along the way that she would later post on Instagram and Twitter. Later that night, Ogunlesi reposted one of her photos on her Stories. Then, a considerable while afterward, she followed Brown on Instagram. "I was just like, Wow, that's mad," she says. "But… why? I didn't see whatever it was that she saw."

Months later, in mid-2020, news of Ogunlesi's groundbreaking Yeezy Gap collaboration was announced to the public. Brown congratulated her via a celebratory Instagram story, to which Ogunlesi replied by saying that she couldn't wait to meet her in person. She then sent Ogunlesi a picture of a Lamont hat she was working on, and asked her what she thought of it.

It was the beginning of a months-long, synergetic, creative dialogue between the two. Over a drawn-out process that lasted through the remainder of the year, the pair went back and forth with ideas for a planned collaboration set to be released in 2021.

At first, talks mainly consisted of both designers matching their products — Brown's hats with Ogunlesi's various designs — while agreeing on pairs that would conceptually fit well alongside each other. Then, as the conversations grew more serious, Ogunlesi went on to invite Brown to work with her in her studio. She led Brown to order samples of the hats (a measure that meant that she'd have to dip into her savings) so that they could work on the collaboration in real life.

But then, after several enthusiastic exchanges, Brown says Ogunlesi stopped responding to her messages. (When reached by email, Ogunlesi did not respond to PAPER's request for comment.)

"I thought it was just that she was just so busy," Brown says. "As a small creative, versus a big creative, [that's] the first assumption. I was just like Okay, I'll just be patient, and when the time comes, the time comes. I focused on other projects I was working on."

Then, one day, Brown says she logged onto Instagram to find that Ogunlesi had seemingly not only taken the idea for herself, but publicly announced plans to release the hats under her own name via an official post.

"It was being played out right in front of my face, and I was just seeing me being ghosted at the same time that my intellectual property was being recreated," she says. Brown's initial approach was to address the matter with Ogunlesi in private. After she didn't hear back for some time, her resolution grew to be far more direct. "I think the last straw was when they posted that they were releasing it to sell."

On March 18, Brown sent out a lengthy, now-viral Twitter thread that laid out the complete circumstances surrounding the situation. As the thread started to gain traction, she received two phone calls from an unknown number. It was Ogulnesi's manager. She explained to Brown that because she was new, she did not know anything about the situation. The manager then offered to arrange for the collaboration to go on as planned, with Brown receiving shares and financial reimbursements. The answer was an emphatic no.

"Why would I want to do that with someone who's ethically not compatible? It just wouldn't make sense," Brown explains. "I would become a sellout. What I speak on -— especially for other creatives, to inspire them to speak up — it wouldn't mean anything. It would just be like, what was the point? So I declined that happily."

Three days after the original thread was posted, Ogunlesi replied to Brown's tweet with a written rationale. "I have apologised to you for the pain I've caused but I will not sit back and watch you call me a thief when that is not true," its opening words read. "I had been working with coloured fur well before you and I started talking. I did not steal your designs. The fabric is available on Amazon for anyone to buy. See screenshot."

When asked what she thought of the note, Brown recalls having felt that it was messy, belittling, patronizing and unneeded. Several points in Ogunlesi's response, she says, registered as unfounded: at one level, the specific fabrics she uses in the hats are sourced by a supplier she has had a lasting relationship with — not Amazon; and at the other, she did not come from any richer of a background than Ogunlesi's own. "I literally went and ordered wings after I saw that," she recounts, rolling her eyes behind a buoyant chuckle.

Nevertheless, Brown is eager to put the entire matter behind her and shift her focus toward the onslaught of new opportunities that have arisen as a direct result of it. One impact of the sudden publicity spike has been thousands of reaffirming messages that have become quite difficult to manage over time.

Going forward, she is excited about using her newly-expanded platform to speak out against similar cases to her own, and making sure to bring creatives up the ladder alongside her as she herself seeks to climb to the top.

In a flash that epitomizes such an outlook, some time before the interview comes to a close, her computer displays a low battery warning. After she goes to a corner of her bedroom to retrieve her charger, the dual subject of Apple products, and tech monopolies is briefly brought up. She is quick to draw a line to the fashion industry: people have grown accustomed to buying for the name.

"I don't want people to buy for the name anymore, that's what a lot of people do," she says. "I want people to let the art speak more than the name. Especially when it's someone else's art. There's so many talented people working so hard to bring something original into the world, and you're still buying for the title… Why?"

As Brown continues to navigate through an industry that, since her childhood, proved itself to be fundamentally formatted against her success, questions like these are ones that will perpetually furnish the long, winding road to long-term stature. For the moment, though, she has enough of a pedestal beneath her to help hoist her above the doubts that often cause stories like her own to dwindle away unheard.

"I think there's a lot of good things to come out of this," she says of her platform. "There's room for everyone at the table."