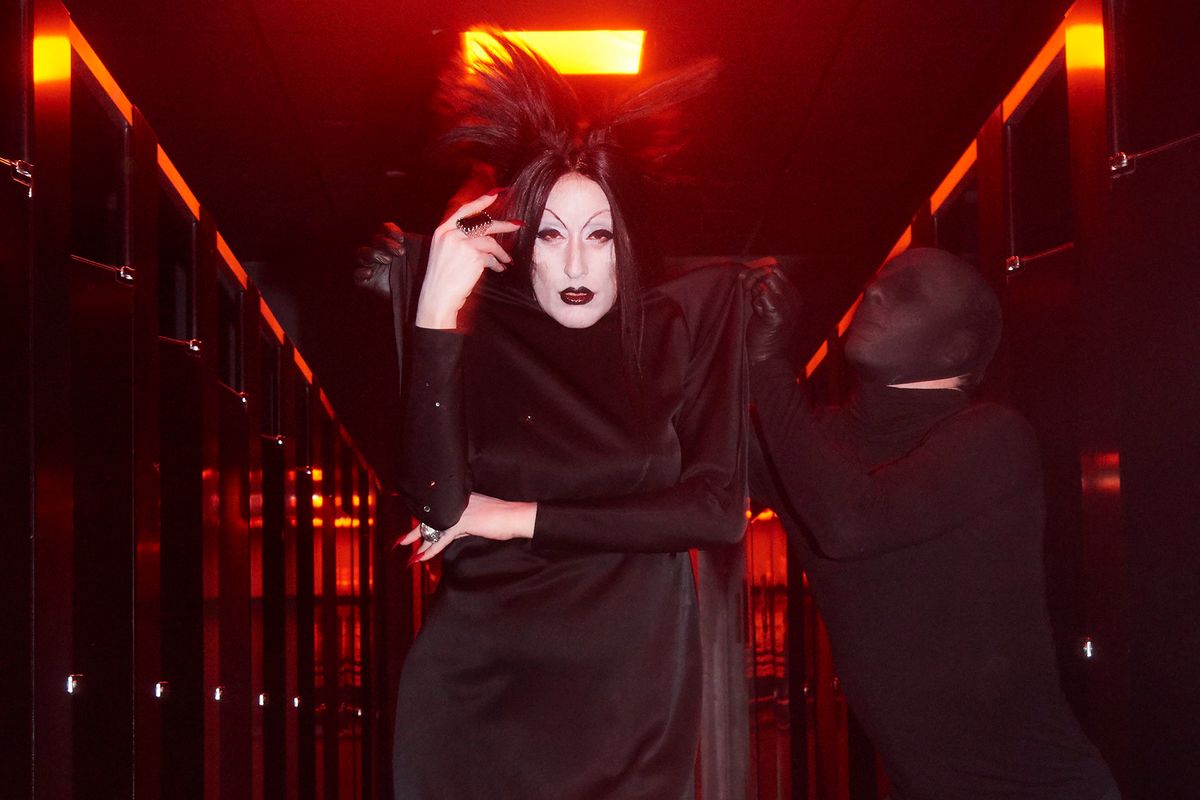 Ladyfag's Holy Mountain Is Returning to Save New York Nightlife

If you listen closely to the streets of New York, beneath the wailing sirens and screeching subways, you'll hear whispers of the legendary parties that used to be. Ladyfag, the Toronto-born, New York-based party queen who's been instrumental in shaping the city's current nightlife scene, has helmed so many of these ephemeral evenings that have transcended the churn to embed themselves in rave history. Who can forget the SHADE warehouse rave during Pride 2015, when giant inflatable dicks shot laser beams over an ecstatic sea of shirtless gays? Or that Harajuku-themed Fashion Week afterparty where Rihanna and Nicki Minaj partied in a South Street Seaport mall?

Then there was Holy Mountain, lovingly shortened to HoMo by its crowd of queer freaks. One of the crown jewels in Ladyfag's nightlife dynasty, the monthly night was held in a kooky, labyrinth-like club called Slake in Manhattan on 30th Street — a culturally dead zone lined by parking garages and listless condos. Holy Mountain was the one of the only parties that could entice Brooklyn's most fabulous ravers to cross the bridge into douche finance bro-infected Manhattan after dark. It was a classic New York melting pot: leather daddies sniffed poppers next to Vogue models, drag queens rubbed shoulders with Chelsea muscle gays, and club kids in giant costumes prowled the dancefloors, next to stern techno heads in head-to-toe black. It didn't matter if you were the next Alexander Wang or a shy kid who'd just moved to the city from Oklahoma — as long as you were down to dance, you could hang.

Last year, Holy Mountain shuttered after Slake was razed to make way for more condos — a classic New York sob story. For 12 months, the party went quiet, but Ladyfag recently announced that she's reviving the party and moving it to Brooklyn — specifically, to The Avant Gardner, a gargantuan space in East Williamsburg that's one of the most ambitious venues in North America. It felt like a realignment of the old order — a sign of a new chapter. Along with the announcement came a stunning promo video with a "Brave New World" theme, made in collaboration with French designer Charlie Le Mindu, best known for his spectacular works of art made from human hair.

So I called Ladyfag up one morning to ask her about the dystopian narrative behind the video, Holy Mountain's legacy, and whether the last nail on Manhattan's coffin has been finally pounded in. For Holy Mountain: Brave New World tickets on Friday, December 14, click here.

Hi Lady! What's up with this video you just shot?

My friend Charlie LeMindu is an incredible artist and visual director, we met a few years ago and clicked. We came up with everything for the video and cast it in four days — it was a really family affair: Marco Ovando, who's taken photos of Holy Mountain for the last four years and really understands the party did the cinematography, and [resident DJ] Michael Magnan did the music. For the theme of the party, Brave New World, we thought we could bring in the condos story — and we did in a weird way, but we made it a nuclear holocaust.

Because that's the truth, New York is destroying itself. So the loose narrative is that we've been hiding in bunkers, and this disaster has caused us to sprout hair and become hairy cyborgs. It's finally safe to come out, and on December 14, all the creatures of the past Holy Mountains are being called back to the mountain, and we're gonna throw a fucking party.

I wanna talk about the lineage of Holy Mountain — it always felt very fashion, glam, in the lineage of '90s club kids. Whenever people told me club culture culture in New York is dead, I'd roll my eyes and point them to your party.

One of the things about my party is that there are four different rooms with different styles of music — that was one of the most appealing things for me. The music spans different sections of nightlife, and the club is a big labyrinth where everything becomes a big scene. There's room for people to be more organic about it, it's like a whole bunch of scenes thrown together, and that doesn't get to happen enough. The idea that it's just one thing is a little misguided. The club kids get photographed and put a lot of time into their costumes, but that doesn't mean they're the only kind of people that were at that party.

"New York is destroying itself."

Even the melting pot vibe of Holy Mountain feels kind of '90s though. If you go to Brooklyn now it feels much more segmented. But your party felt like a bridge between '90s Manhattan club world glamor and the amazing dance music that's coming from Brooklyn.

Being on 30th street was very strange. Even then, I didn't want to do a party all the way in Midtown. It didn't feel cool. Five years ago, parties existed in Manhattan, but they were starting to be pushed towards Brooklyn. Since then, so many clubs have popped up in Brooklyn. It's the SoHo effect. People start partying there, living there, then bigger venues come in because they see opportunity. Output started and now Brooklyn is the place where the parties happen.

But when you find a really good venue, especially if it's a monthly, people will travel. I'll be honest, if the venue [Slake] came up now, I don't know if I would take it. The venue was a dump, it was crazy, and that's what made it work. It reminded me of the venues when I first moved here on the Lower East Side. It was this crazy labyrinth with stairways that felt like they were going to nowhere. Tons of nooks and crannies. It was a really messy, fun party — that's what made it so amazing.

Brave New World is interesting theme for the new Holy Mountain, because the Aldous Huxley reference has a sinister, dystopian undertone.

Well, there's definitely a darkness. Condos are one of New York's viruses causing the death of Manhattan. Holy Mountain was destroyed by its environment, and that's sad, but everything bounces back in its own way. We didn't die, we just morphed into these new creatures and moved. Holy Mountain started based on the [Jodorowsky] film, and the party has always been filled with symbolism and hope and lots of darkness too. Parties in general are a place where people run to escape the darkness in the world and share energy with people.

"Putting time and love in a party doesn't make it not underground or cool, it just makes it a different experience."

How will the new Holy Mountain differ from the old?

Well this won't exist every month, it's more of a special event. From sound to light to staffing, there's a lot of work that goes into making a big-scale rave like this happen. So people see it's not $10 to get in — well of course not! We all love going to crazy illegal warehouse parties, but sometimes it's nice to go to a warehouse party where there's more than five bathrooms for two thousand people, and you don't have to wait two hours at the bar and there's no ice in your drink. Sometimes it's nice to go to a rave that's more produced. Putting time and love in a party doesn't make it not underground or cool, it just makes it a different experience. It's about having a bathroom to go to when you need to pee. Call me crazy.

A big part of the old Holy Mountain were all the different rooms. Every room had its own vibe, DJs, hosts… are you planning to recreate that?

The venue is different so we're adapting to it. The Jade room, for example, was our baby room that had techno and acid and was upstairs. Now that's completely changed, it's one of the big rooms because I have an amazing warehouse for that space, and I can bring in four techno DJs: Lady Blacktronika from Berlin is doing a techno set as Femanyst, my girlfriend Skin, Katie Rex from Bound, and resident Danny Taylor.

It's fun to give such a big room to all these DJs who've played in this shitty little room before, and now have a major soundsystem and lighting rigs. Avant Gardner just built this other room that's barely been used yet, it's an outdoor Spiegel tent where the Ruby Room is going to be. Abra is performing in there. And that tent is where the idea for our movie came from — I could icture all these crazy characters running around in it, like the cantina scene in Star Wars. Of course, when you see the movie, I'm less of a Luke Skywalker and more of a Morticia Adams!