Coachella has become as much a celebration of fashion as music, from all the unruly festival-goer style to performers' custom stage outfits.

Beyond the sea of Louis Vuitton, this year saw a significant crop of artists wearing designs by Sharon Rahim of the family business LA Roxx. What began as a mid-eighties leather brand, outfitting everyone from Michael Jackson to Guns N' Roses, has transformed into the go-to source of custom performance looks for today's stars like Nicki Minaj, Lady Gaga and Beyoncé. And at Coachella 2019, LA Roxx's legacy continued strong.

LA Roxx was behind rapper Tierra Whack's inflatable highlighter yellow dress, which blew up mid-performance like Violet Beauregard. This was easily Coachella's strangest look, and one that continued strongly in the vein of Whack World. The brand also outfitted Jaden Smith, who danced on top of a floating Tesla Model X in black, patchwork-printed joggers and a matching military vest. Rosalía's custom red PVC look by LA Roxx was a perfect pairing for the Spanish pop star, as well as Anderson .Paak's tropical shirt-shorts set.

"I believe that clothes have power. It allows you to express yourself in a way that you otherwise couldn't."

"I believe that clothes have power," Rahim told PAPER. "It allows you to express yourself in a way that you otherwise couldn't. My point of view as a designer consists of a couple things: The first is for the person wearing that specific look to feel like they are the center of the universe and to know that nobody else has anything like what they have. I want to instill a sense of confidence where they feel like they can take over the world. The second is for the person who is seeing this creation. I want them to discover something new the more they look at the piece. I want them to be confused, yet intrigued. My goal is to add depth and complexity, but in a very subtle way."

Below, Rahim breaks down all the LA Roxx looks worn at weekend one of Coachella 2019: 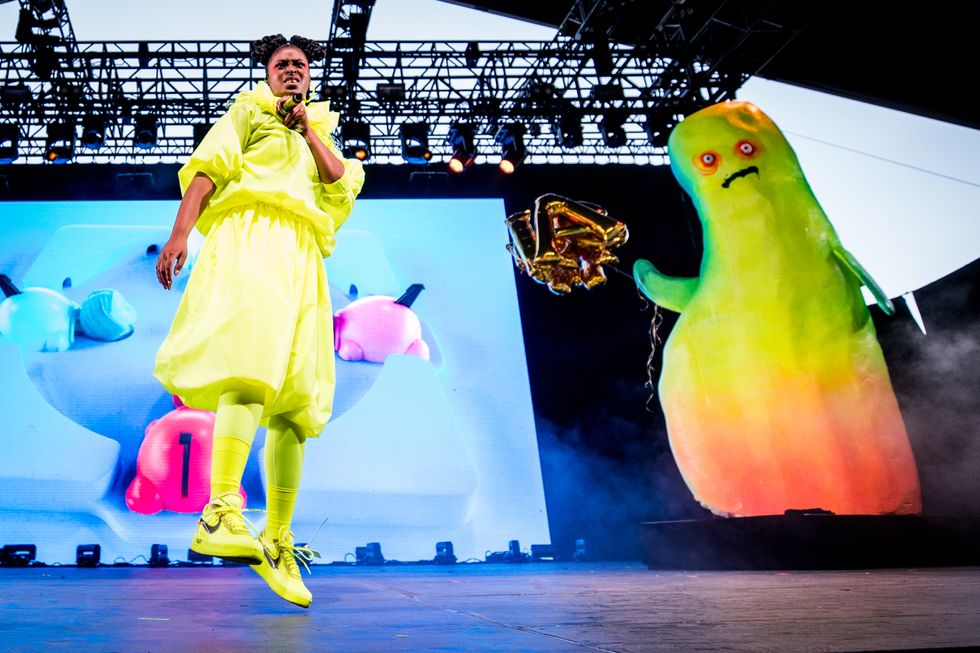 "We worked with Shirley Kurata who is Tierra Whack's stylist. Shirley came to me and had this idea of doing this piece that was inspired by a Japanese construction workwear vest that had an internal cooling fan. She wanted an element where the piece would inflate and create sculptural silhouettes throughout [Tierra's] performance. We brainstormed and discussed what would look the best in terms of fabric and color — how we could achieve this in a practical way and tested out some methods, and just went for it. It turned out so fucking rad. [It's powered by] battery-operated mini fans found on Amazon." 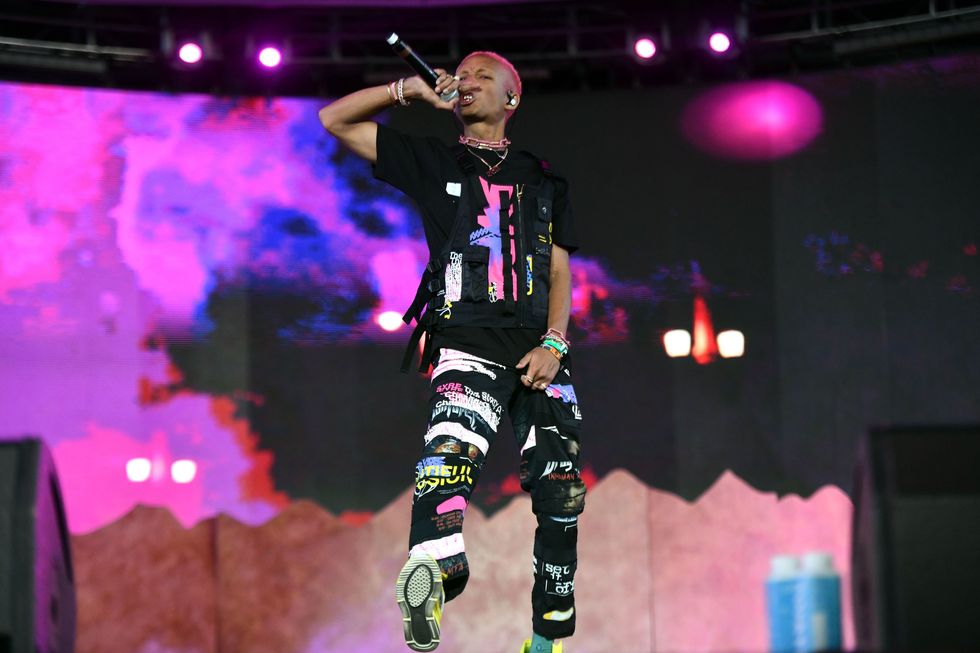 "Working with Jaden [Smith] and his team were great. We wanted the piece to look deconstructed — an homage to punk. I thought it was fitting since I think Jaden represents this new generation of young creatives where genres are blending. Hip-hop is maturing into a punk phase. It's akin to what we do here at LA Roxx in fusing and remixing elements from varied subcultures. I thought Jaden looked great on stage. [I'm] very proud of that moment." 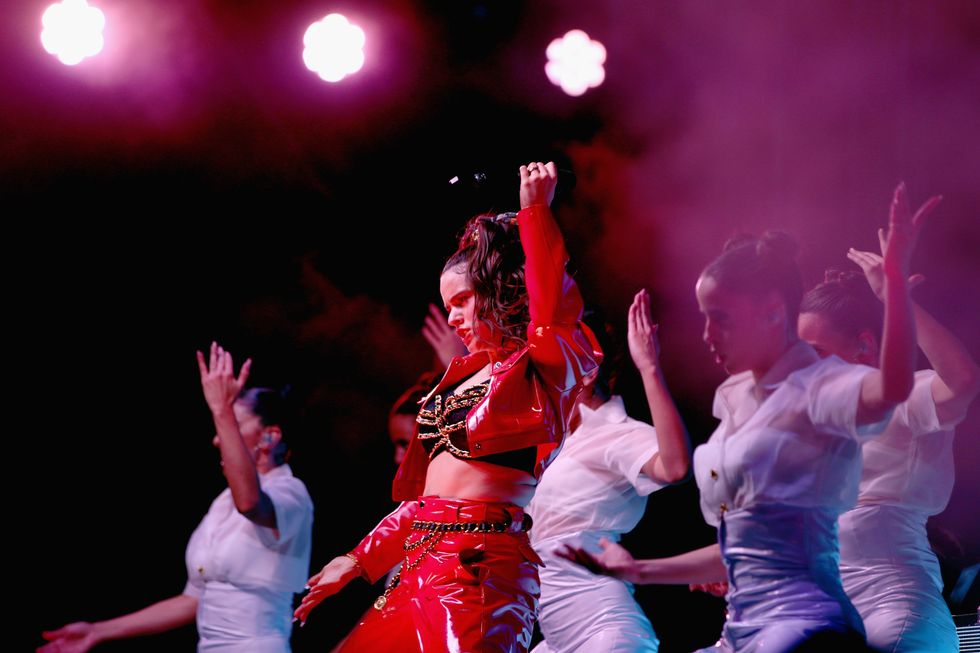 "Rosalía's pieces were a result of a trip I took back with my wife in Kyoto. We came across these vintage painter pants, which provided us the inspiration to redesign the silhouette and apply PVC material which created a new holistic take on the silhouette. The volume of the pant leg really brings out the shape. It's great to see my travel inspiration on stage — a surreal feeling." 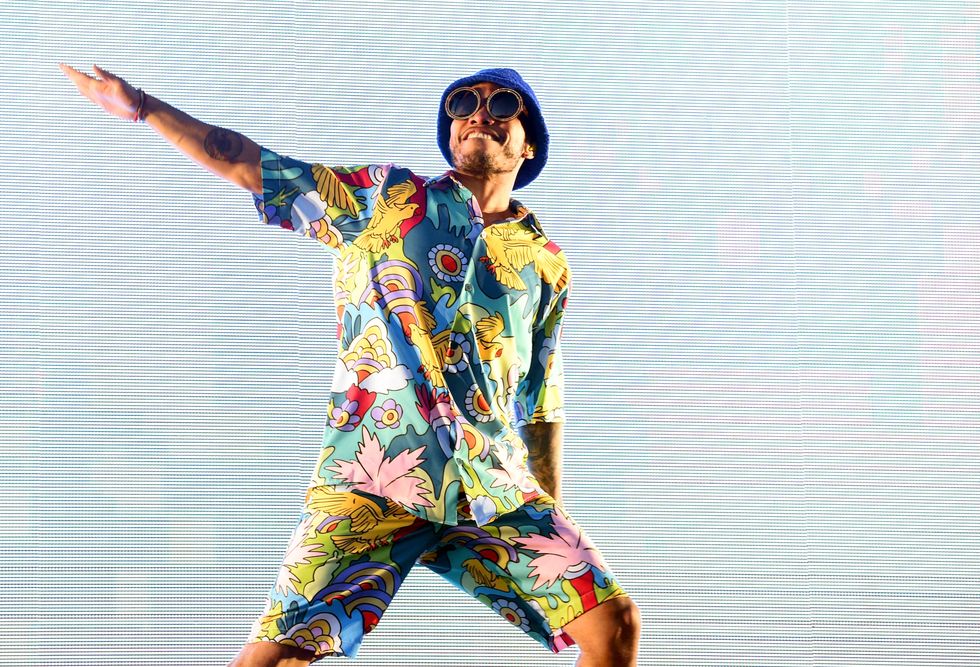 "With AP we worked closely with his stylist Jasmine Benjamin, and took AP's vibe and aesthetic and just built on it. He has such a big personality and presence on stage, so we wanted to create some custom prints for him that was complementary to his vibe."