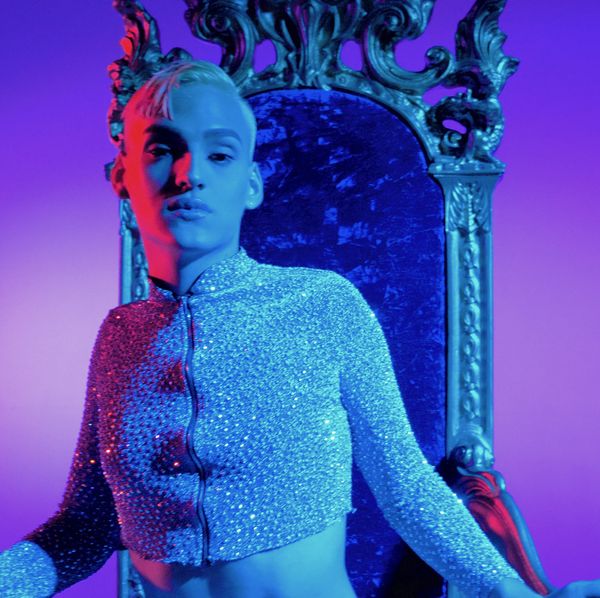 He's the trailblazer we never expected: Kevin Fret, a 24-year-old unabashedly, outspokenly gay Latin trap artist, born in Puerto Rico, currently living in Miami, and with an Instagram following of 46.4k and counting.

While the massively popular genre leader Bad Bunny somehow earns queer cred for even the slightest feminine nuances (like painted nails), he's never publicly identified as anything but heterosexual. Kevin Fret, however, is actually gay — he wants everyone to know, but he also doesn't give a damn what you think about it.

In the video for his debut single, "Soy Asi," which has amassed more than 163k views in less than a month, Fret sports sparkly oversized shades, super-glossed lips, and a glittering crop top and pant set that was formerly a bodysuit. After last year's lipo, he says, he wasn't about to cover up his stomach for the official launch of his career.

It sorta goes without saying that Latin trap, like much of popular hip-hop, is riddled with misogyny and homophobia. It's a fact we sometimes accept from mainstream music, yet we don't let that kind of bigotry fly in our daily lives. Kevin Fret, however, is transcending the machismo and transforming the genre.

He's not a perfect hero, though. A strict religious upbringing is his reasoning for saying in a recent interview for Rapetón that being gay is a choice — for him. It wasn't until he was 18 that he came out, Fret adds. Addressing the subject in this interview with PAPER, he notes the personal context, that it's how he feels specifically, and acknowledges that most LGBTQIA people disagree. (Science also disagrees).

So he's flawed, yes. But he's no doubt queering the Latin trap genre — and that's a positive change we can definitely get behind.