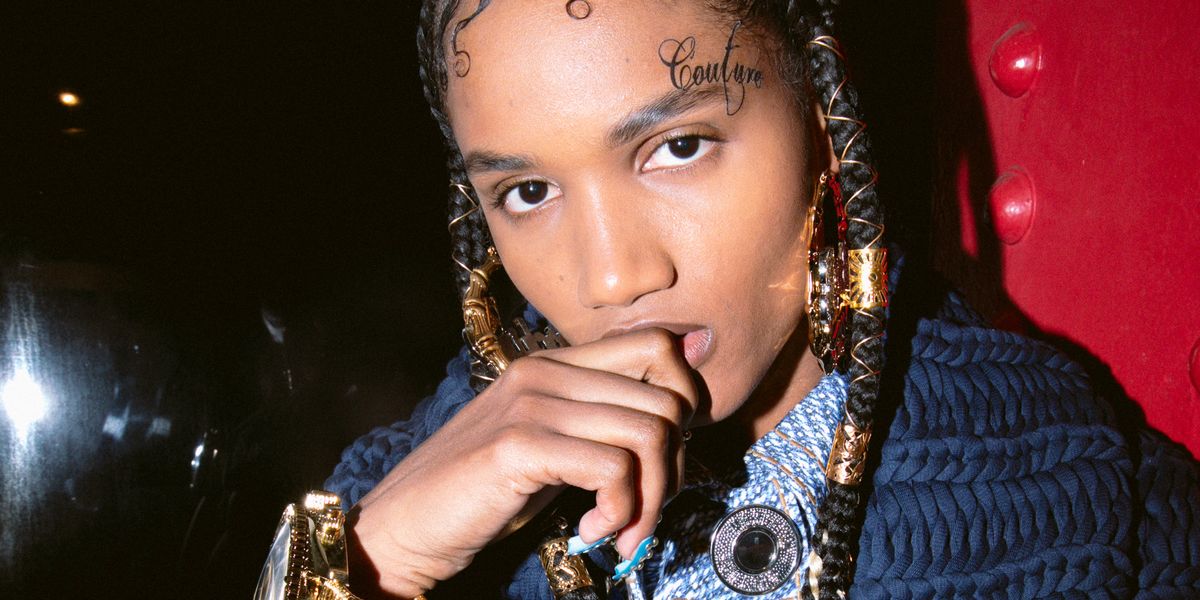 Kabuki on Moschino, Makeup for Men and Michael Jackson

"I wanted to pay homage to the cool kids and chic ladies that both inhabit and intersect with the city, so for that reason, showing in New York was a must," Scott told PAPER. "The subway runs from uptown to downtown. This mix of uptown and downtown is just like my collection. I love that juxtaposition of elements that are not normally expected together. It makes it a more dynamic and exciting pairing."

Over in the beauty department, a string of hair stylists, makeup and tattoo artists all collaborated to create looks to complement the theme. Japanese nail artist Mei Kawajiri crafted more than 1,200 nail tips by adding cut gold chains, silver metal hoops, and the words "Moschino" in glimmering letters. Hair stylist Jimmy Paul whipped up a range of retro styles such as braids, finger waves, and trimmed bangs topped with gold metallic spray.

Legendary makeup artist and frequent Moschino collaborator Kabuki was tasked with putting together and directing the makeup looks for the night. In collaboration with tattoo artist JonBoy, the duo calligraphed temporary face tattoos with the words "Moschino" and "New York" pasted across models' foreheads.

The tattoos were accompanied by a '90s nude lip liner and ultra-defined brows — a look put together to amplify the feeling of "elegance," Kabuki told PAPER, crediting Scott with the idea. "I am a big proponent of personal style, and nothing is more personal than a tattoo, especially on the face," Scott said. "We collaborated with JonBoy to give these temporary face tattoos the most realistic aspect we could."

Talking with PAPER, Kabuki further broke down the inspiration behind Moschino's looks, working with Jeremy Scott, and makeup for men.

Were most of these looks collaborative with Jeremy?

I think [Jeremy's] hiring me because he knows I will put a personal vision into something, or personal attention to detail, and that's why I get asked back. I understand he likes to keep things quite simple, so that someone never looks over made up. All these makeup "tricks" are to always make the person look beautiful, not to make them look like they've been sitting in a makeup chair for three hours. You want to keep the freshness, their own personalities, and their own beauty. Ultimately it's about the clothes and the attitude, so a lot of the makeup tricks and details go unnoticed, but they add to the effect.

Transformation has been a big theme across your work. How does that tie into what you've done for this collection?

Picasso said that "art is the lie that tells the truth," so in a way when you're making the gorgeous skin and the perfect eyebrows, you're really bringing out that person. Even that act of turning them into another person and really polishing them, it makes them feel really good. With the clothes and the atmosphere of the show, it brings this energy up, and that energy is transformative. It's like a party, and that's what fashion is about. It's that moment that everyone remembers when they were there. In a way that's what actors do: they use makeup, and they have to feel like there's a ritual before they go out on stage and then there's the performance.

How did you and Jeremy first start working together?

He asked me to do a fashion show. We'd met once before when I was working in nightclubs. I guess he was a student? This was before he was a designer. It was a quick introduction, and so I didn't know that he knew me. I was a big fan of his. Then I got a call to do makeup for the cover of Japanese i-D, which he shot the cover for with Coco Rocha and one of his dresses for the frame. So I just went over there and I was like, "How about I paint the shadows on her face, so she's a painting of herself?" That was the first time we worked together. Nobody else was around, it was just the three of us and we did the photos. This was long ago! Maybe 10 years?

And you've been working together since then?

He actually asked me if I liked doing fashion shows and I said "no." That's how slick I am. I think I had just done a few of my first fashion shows and they were difficult ones and it was fine. They're so much work, but I didn't know that it was a job interview so he didn't call me right away for a show because of that.

What do you now think about fashion shows now?

Now it's not like the first day of school; it's always a little bit scary, but you'll have your past experience to draw on. You learn from each time, so it gets better and better. It's really fun, it's like live theater. There's nothing to compare to that excitement of seeing everybody look fantastic and seeing everything come together.

What are your thoughts on the rise of men's makeup?

I've put lipstick and other types of obvious makeup on male models at shoots and it didn't diminish their masculinity if it was there to begin with in the first place. It just brought out an intensity, kind of a rock star thing. The test to whether makeup will definitely look cool on you isn't about gender at all, it's whether you're good looking and in your twenties.

You've worked with a lot of male celebrities throughout the years, most notably Michael Jackson. How did that happen?

I had worked with Macaulay Culkin, and I thought that maybe it was a case of he'd mentioned me to him, but it wasn't like that at all. Michael told me he liked my shading. I think he would've worked with Kevyn Aucoin, since he was a fan of Kevyn's makeup. He was just looking for somebody who could do makeup as some sort of a painter really. That's how it happened, but really it came out of the blue. I was wondering after that, Who's gonna call me next? Donald Duck? [Laughs]

Does anyone ever think Michael Jackson is gonna call them? It was a great experience. I still remember really well, because there was a real connection and respect that I felt. I felt like I was with a true artist — someone that was very sensitive. It wasn't like working with a celebrity that keeps checking their Instagram to see how many hits they got. It was nothing like that at all, it was really old school, just focusing on what you're doing. Not in a high pressure way, just in a happy we're here to do this, enjoyable way.

Michael was easy to work with?

He was very respectful. The thing that I don't like in a job is if I'm prevented from doing my job. I felt that he was giving me a lot of respect by letting me work and appreciating the craft. Also, he was fascinating to watch — just dancing spontaneously and being humble and sweet. He treated everybody really nicely.