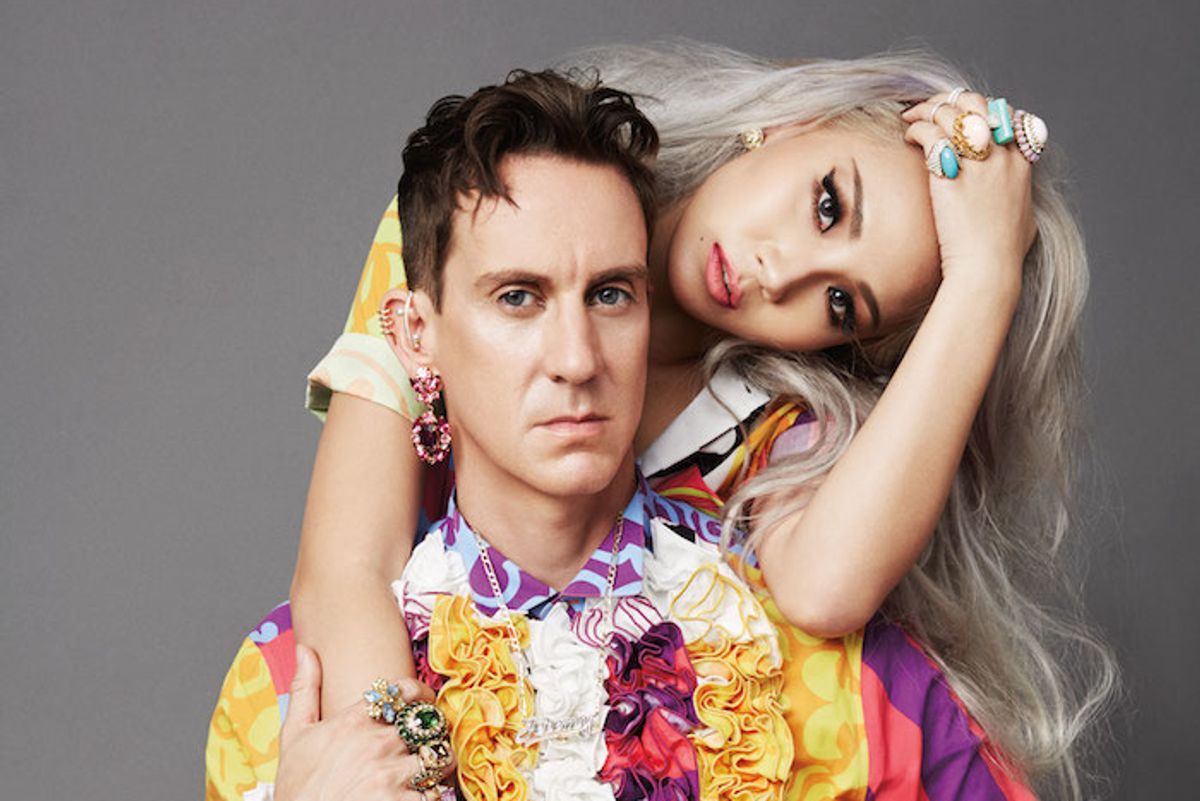 Jeremy Scott and CL On Moschino, Pop Culture and the Power Of Girls

Jeremy Scott is a high-fashion Pied Piper for pop stars of all nations. The Kansas City, MO, native launched his first eponymous collection in 1997 and quickly became known for his unabashedly whimsical designs. Then, in 2013, his career took a dramatic turn toward luxury: he was named creative director of the Italian brand Moschino, whose founder, Franco Moschino, with his tongue-in-cheek design humor, was a true spiritual father to Scott. The moment the young American took over, Moschino pieces became collectors' items, from French-fry phones to leather-jacket handbags. Between Moschino and his own line, Scott has dressed a cavalcade of chart-toppers including Madonna, Rihanna and Miley. Here, Scott's partner in crime is his bestie CL, a 24-year-old megastar in her native South Korea who's got her sights set on changing perceptions and inspiring girls worldwide. We sat with them after their shoot to talk about the endless iterations of luxury — high and low, East and West, then and now.

Jeremy, can you tell me who CL is and why you love her?

Jeremy Scott: To me, she is one of my best friends; to her fans, she's the Baddest Female. So yeah, it's a dichotomy. I know she also has an image, and I'm aware of the image — I contribute to the image. But when I think of her, I don't think of that. I think of who I love and who I know, and it's a very loyal, very sincere and very smart person.

How did you guys meet?

CL: Well, I wore his Adidas shoes in my very first video, and you [Jeremy] saw it on the Internet, and someone from Adidas contacted you?

Scott: I was coming to Korea for Adidas and I said, "I want to do a shoot with her. I want to meet her. I love her. I'm obsessed!" They set up a photo shoot for us so we could meet and do something. Actually, the first video was "Fire?"

Scott: So there were pieces from my own collection in the video and we just instantly clicked. I came dancing into the studio...

CL: We had so much fun. I still remember that day.

Scott: And somehow she coaxed me within a few days to go onstage with her to perform in Korean — which I don't speak!

CL: You were good!

Scott: And I somehow rapped or sang in Korean.

CL: Yeah. The youngest girl in my band, because we were performing at a club, couldn't come in.

Scott: She was underage so I took her part. It was a lot of fun. We have many good memories, and we've had many, many, many since then — not with me onstage though!

Jeremy, what is your definition of luxury?

Scott: For me, the things that are luxurious are things that are rare. It's not really about how much something costs or whether it's "limited edition;" it's about how special it is. It could be a mass-produced thing. It doesn't need to be expensive. And maybe that's why it has changed. It's not so much about the most expensive materials and the most expensive workmanship and the most amount of time you can say something took to make. Of course I realize that's not a bad thing, but it can also just become heavy and old. You can make something that's very "all that" but still ugly and not special.

Do you see changes in the luxury market in terms of newer designers moving in?

Scott: I never really thought about it. There's obviously a younger crop of designers, and I think that means a younger crop of clientele. There's a generational shift of what someone 20-35 thinks is special, beautiful, rare, unique and luxurious versus someone who's 45, 55, 60, who's been that customer for a while. That's why, when I make things, I try to make something that you've never seen before. Even if it's using things you are familiar with. I'm all about that, because that's iconography — a way to communicate with the masses. You can speak to more people while making hybrids of things that are special and unique.

What you've been doing with Moschino is so fun. How do you balance that playfulness with luxury?

Scott: Honestly, I have the best manufacturing and the best quality at my fingertips, so it's just like, "I'm going to make that giant milkshake into a purse." I can do it and make it with beautiful quality. I can take these very pop ideas and then they have this dichotomy; the way they're made does follow the tradition of "luxury." I'm just giving it a new image, to a degree — a different take, as opposed to an alligator purse.

Do you feel like you need a celebrity or a recognizable face for a luxury line these days?

Scott: I have such an affinity for musicians especially. I'm not really an actress' designer. I love musicians because, if their job is to personify a part of their personality, then I can come in and help turn up the volume on it. I love that, because it is really being with a unique person and creating with a unique person, and that's why I have these strong female relationships like I do with CL, Katy, Rih, Miley. I'm lucky I have those relationships with people I feel so inspired by. I am the musicians' designer because I do things that are stronger and more eccentric. I get it, actresses have to blend and become other people all the time. I'm not that person. My design stands out; it personifies. It's like a megaphone. And I love that [CL et al] can carry my message further.


CL, as a pop star, how do you see that relationship between music and fashion?

CL: It always goes together. But I feel full when I wear Jeremy's stuff. Sometimes it could get boring if you just wear all black, but his all black is a whole different thing. So whatever I wear, I feel like I could play this character onstage; it gets me into that zone. I started wearing his stuff when I started my career, so it's always been there.

What is it about Jeremy's work that speaks to Korean audiences?

CL: It's not only Korea; I'd say it's the whole Asian market. A lot of his fans show up when I'm there in Asia, and vice versa. I think they love it because it's just good! How else can I explain that? In Japan, Korea, Hong Kong, we're more into colorful, cute, very animated things, so I think we're more connected to that too.

Scott: I feel like Asia has always been super open to "new." Maybe because there's already such an ancient culture, anything new is exciting. I feel like that's why it's always been so quickly embraced there. I do think my clothes set you apart, and that is something that is great in Asia. There is less hair-color difference, unless you input it yourself, and there are things that are already keeping people more similar, so you can set yourself apart easier.

Is Korea a major force in luxury?

CL: I think a lot of the young kids right now are looking for something new, and they want to look different. Especially girls, and this is why I'm trying to come out here — to set an example of an Asian girl. A lot of Asian girls love being basic because it's safe. But the thing is, a lot of my fans are those girls, and they want to be bolder, but there's no one they could look up to and be like, It's okay to be that way. There's no one out here who will do that, and I feel like I have done enough for Asia and changed a lot of girls. Even if it's a phone case, they try. Girls in Asia are very obedient, shy, timid, quiet, but I can tell that it's changing, and I want them to be stronger and tell them that it's okay to be different. Being special is a luxury, and I don't think we have that. Yet.

Read Our Cover Story with Olivier Rousteing and J.Lo