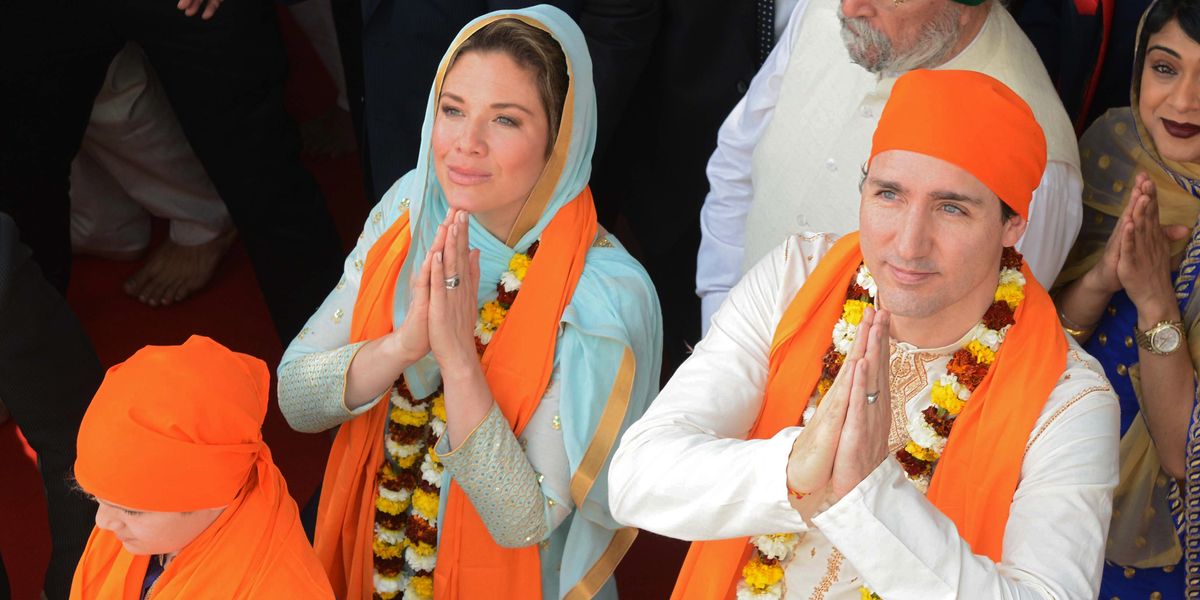 The photo was taken when Trudeau was 29 and a teacher at a Vancouver private day school. Attending the school's "Arabian Nights"-themed annual party, Trudeau smiles and poses with friends, wearing a turban, with his face, neck and hands painted black. Although its a costume party, no one besides Trudeau appears to have worn blackface, TIME, which obtained the full yearbook, reports.

TIME on Instagram: “Exclusive: @justinpjtrudeau, #Canada’s prime minister, wore brownface makeup to a party at the private school where he was teaching in the…”

"I shouldn't have done that. I should have known better and I didn't. I'm really sorry," Trudeau said to TIME reporters. When asked if he considered the incident racist, he answered: "Yes it was. I didn't consider it racist at the time, but now we know better."

The photo is not the only time Trudeau's worn race as a costume. In his press conference addressing the "Arabian Nights" photo, he admitted that he also wore blackface when he was in high school. At a talent show, he performed "Day-O," a Jamaican folk song made famous by Harry Belafonte, apparently dressed up as the Black singer. CTV News later procured a Brebeuf College yearbook photo of that incident from a source. In it, Trudeau sports an afro wig and dark make-up,

Exclusive. Sources have confirmed to me that this is THE picture of ⁦@JustinTrudeau⁩ in blackface from high school… https://t.co/iNJQWLZ0Le
— Evan Solomon (@Evan Solomon)1568860490.0

The high school incident was the only one Trudeau listed, when he was asked during Wednesday's press conference if there were any others he'd like to own up to. Despite this, a third incident where Trudeau dressed up as another race surfaced, according to TIME: "a grainy video showing Trudeau in blackface, raising his hands in the air." Zita Astravas, the head of media relations for Trudeau's party, the Liberal Party of Canada, confirmed that the video is from the early 1990s and, indeed, shows Trudeau in blackface.

Trudeau is currently running for re-election as Prime Minister, and is tied in polls with his conservative opponent Andrew Scheer. The election is set for October 21. Although Trudeau is something of a cult figure among liberals and has made racial justice a central part of his platform, he's been previously criticized for cringey cultural dress-up when he and his family wore elaborate traditional outfits during a state visit in India.

Trudeau was also accused of groping a reporter at a charity event in 2000: an allegation he denies.

"It's insulting... it's making a mockery for what they live and what their lived experiences are," said Jagmeet Singh, the leader of Canada's leftist New Democratic Party and a Sikh, who's running against Trudeau in the 2019 election. "I think he needs to answer for it. I think he's gotta answer the question why he did that, and what does that say about what he thinks about people who, because of who they are, because of the color of their skin, face obstacles in their life."

Tonight is not about the Prime Minister. It's about every young person mocked for the colour of their skin. The c… https://t.co/gJ0WptLXZU
— Jagmeet Singh (@Jagmeet Singh)1568856496.0