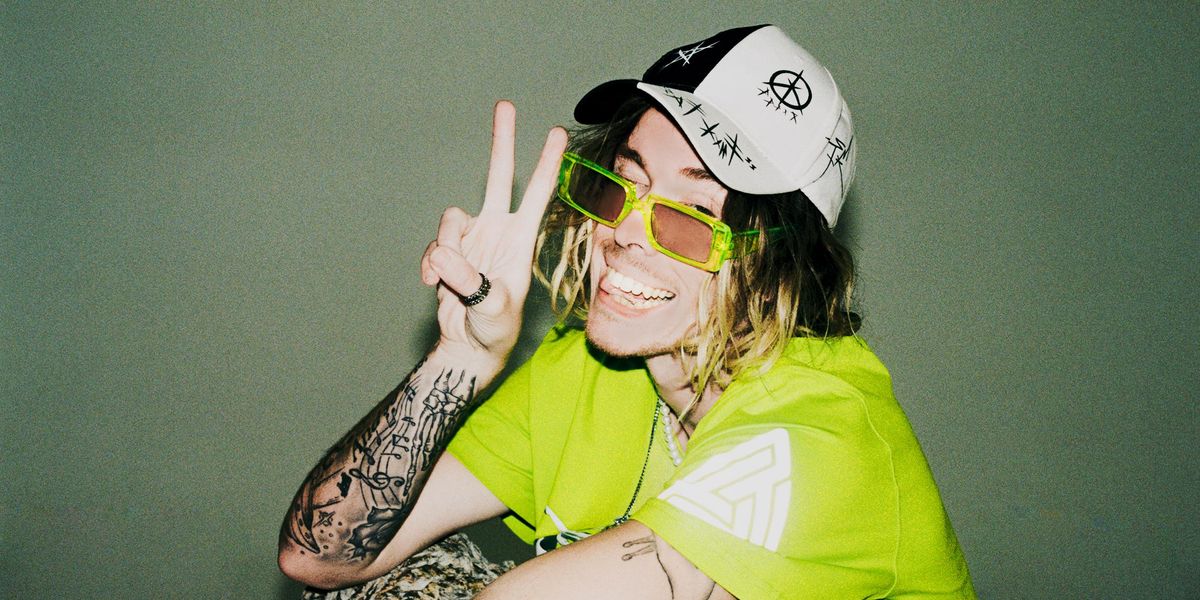 Jeris Johnson is on a crusade. Some days his quest appears to be quite literal. Like, he carries an actual sword.

His mission? To slay the old, boring-ass dragon that is contemporary rock music, finally resurrect the genre and catapult it into the future. Nay, he might even say this is his destiny. Whoso pulleth out this sword of this stone and anvil is rightwise king of rock 'n' roll.

In a grand-scheme sense, the 25-year-old musician — who, in true 2020 fashion, found viral fame (and 1.2 million TikTok followers) and made his way to Los Angeles with a record deal last year — wants to make rock music piss off parents again. Jeris Johnson sees your Gen-Z pop-punk revival, and he's not having it.

"The whole Machine Gun Kelly, pop-punk, Travis Barker stuff has done a good job of helping open up a conversation for rock being cool again," Johnson tells me over Zoom. "But it's still not taking it all the way for me, you know?"

"If I'm being honest, I could turn on that new Machine Gun Kelly album for my fucking grandma or my mom and she'd probably like it," he says, laughing. I raise my eyebrows. "You know what I mean? To me that's not honestly what rock is about. Rock has always been the genre that makes your fucking mom go, 'Turn this shit off!'" For his part, Johnson prefers the less-beloved, more-memed guitar-driven acts from the 2000s: your Nickelbacks, your Slipknots, your Papa Roaches. Oh, and he loves how much you hate Nickelback.

Johnson's video chatting from his home studio in Sherman Oaks, where he moved this past November. (Don't forget, he's on a quest: "Where else would I be besides fucking Hollywood?!" he tells me, laughing.) Johnson feels at home on the West Coast. He's from Eugene, Oregon, home to the University of Oregon and about 100 miles south of Portland, the kind of place where "there's every biome you could imagine within an hour of you." He grew up in a musical family — his dad was a drummer, his mom was a singer — though he identified as more of a sports kid until early adolescence, when he began attending rock summer camp. There, at age 13 and in the height of the mid-aughts pop-punk era, he persevered through countless amateur covers of "Seven Nation Army" and "Sugar, We're Goin Down" to nurture his newfound love for performing, while honing in on his own personal music taste at home.

Pop-punk "just wasn't totally my cup of tea as much as this other stuff was, as much as nu metal and Nickelback and Linkin Park and Slipknot," he says, nodding again to the current revival among the TikTok set guided by the likes of MGK and Barker. "The problem I have with it — and I do have a fucking beef with it — is that it sounds like a nostalgia trip. It doesn't sound like the future to me. It sounds like shit that could have been made back then; it doesn't feel like a next evolution really of it. [Instead,] it's hitting everybody in the feels, and then that's why people are latching on to it."

"If I'm being honest, I could turn on that new Machine Gun Kelly album for my fucking grandma or my mom and she'd probably like it. You know what I mean?"

To make music that sounds "like it came from 2030," you've gotta throw the whole time machine into the goddamn garbage disposal to see what it spits out: distorted guitar trills, crunchy trap beats, cornball arena-rock riffs, and some glitchy electro-tech sounds thrown in for good measure (it's the future, get it?). His voice is rich and gritty, a near-perfect lift of the '00s post-grunge sound he's emulating.

The lyrics are where Johnson really cultivates his Ed-Hardy-meets-Skyrim niche: wielding swords, bedding babes, conquering genres, all while "proving all of these dorks fucking wrong." This all translates into his aesthetic. Think, what if a Targaryen wore too much Chrome Hearts? (This can come across as profoundly grody; on the unsubtly titled "my sword," Johnson unfortunately growls, "I'm so clean, you know me / Slayed the dragon, now I fuck the queen.")

In all his medieval braggadocio, it also can feel like he's studying from ye olde playbook of Sir Aubrey Drake Graham, wary of haters and naysayers. He seems eager — nay, hungry — to counter those who write him off as a joke, as just a TikTok kid… anything less than the future savior of rock.

In fact, given the clear and abundant hip-hop and trap influences in Johnson's music, the insistent rock angle is curious. (Lest we forget, Johnson first went viral on TikTok in 2019 for doing an acoustic cover duet of Blueface's "Thotiana" with his mom.) More often than not, he sounds like he's sing-rapping. He insists that calling himself a rock artist is part of his "very strategic battle plan."

"I've got songs where I could have put them in the hip-hop category [but] then I wouldn't have stood a chance on the fucking charts because now I'm competing with fucking everybody," he says. "On a deeper level, to be honest, I knew I could jump in and be a big fish in a small pond."

To him, addressing how rock lost its way in the last decade is Phase One: "I'm going to fucking shake the box in the rock industry first and get all these fucking old rock fans butt-hurt that I'm calling myself a rock artist, because I am a rock artist even if they don't [think] I don't sound like one. Obviously Elvis, the 'King of Rock' or whatever, doesn't sound like Metallica, but they're both rock artists. Rock has been redefined a bunch of times already."

"Hip-hop is the 'I'm going to make my parents mad' music. That's because it's the most boundary-pushing, it's the most alternative, it's the most 'fuck you.' Rock kind of just lost that attitude, and became crusty and old and boring and safe."

Of course, throughout its course of redefinition, rock has only become a notoriously white realm in our contemporary cultural consciousness — despite being a genre, like hip-hop, that was invented by Black artists. (See also: the entire legacy of the internet on popular culture.)

Perhaps more fittingly, Johnson's fanbase has dubbed his particular genre, "Nickeltrap." And thanks to the power of the internet, Johnson has worked with several of his rock reference points, who happen to be his music idols, directly: he's collabed with Papa Roach to cover the band's 2000 edgelord hit "Last Resort," which recently hit number one on Billboard's hard rock chart, and Nickelback's Chad Kroeger hopped on to remix Johnson's song "damn!"

"As much as I like shaking up the box and fucking pissing off the rock crowds and stuff," he says, "there's also an element of a 'passing of the torch,' if you will, where I'm getting this cosign from this era, I'm getting the thumbs up. I'm asking the rock gods, 'Do you give me permission to go down this path and take rock?'"

And so, he's got his sword, he's revved up, his destiny hath been written. (The whole sword thing operates on several levels, one being, he tells me, that his name Jeris literally means "the holder of the mighty sword.") His latest single, "One Night," drops today. The video features a debauched backyard party hosted at Johnson's house — a glimpse at the rowdy post-COVID summer we're yearning for.

Watch the music video for "One Night" and stream Jeris Johnson's song, below.