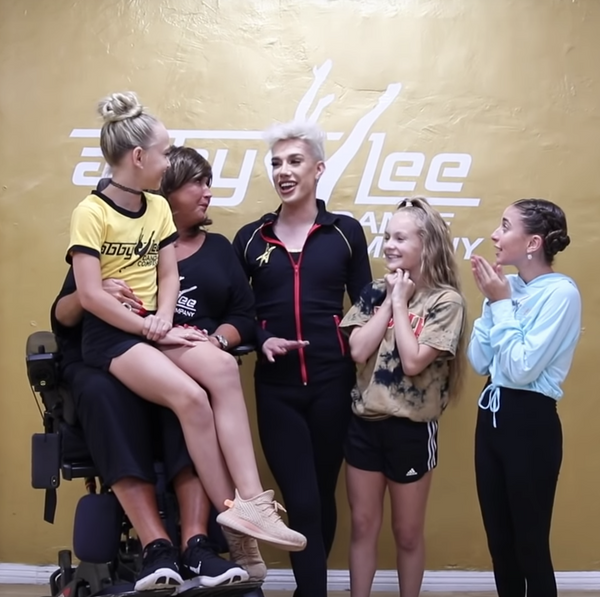 James Charles Is Sore as Hell Thanks to Abby Lee Miller

It's the collab you never knew you needed, but here it is: James Charles x Dance Moms. You're welcome!

After the season finale for the eighth season of Dance Moms aired last week on Lifetime, James Charles took to Twitter to express his love of the show, and to make note of the fact that one of the cast members was in the middle of using her James Charles x Morphe palette when she got into a fight. It's no secret that this season of Dance Moms has been a particularly explosive one, with fights between moms, kids, and instructors alike. Well, when personalities like Kelly Hyland and Christi Lukasiak are notably absent, you're going to need some extra drama to cushion the blow.

I was watching the dance moms season finale last night and just noticed that during a fight, one of the moms angril… https://t.co/0LRfw8RhCe
— James Charles (@James Charles)1567015007.0

Instead of reaching out for pointers on how to bicker and cause drama, James Charles ended up at the Abby Lee Dance Company this week to learn how to dance like an ALDC pro from Abby Lee Miller herself. While he may not have hit every count on the nose, Miller presented Charles with a ceremonious team jacket, an article of clothing typically coveted by members of the company wishing to get on the elite squad.

The nearly 20-minutes long video takes viewers on a journey that's honestly worthy of its own episode in the Dance Moms canon. After arriving at the studio to a chorus of screams from young members of the dance company, and likely subscribers, Charles attempts to dip, twirl, and step-touch his way to the top of the pyramid. Miller herself choreographs his routine, and of course gives corrections whenever she sees fit. Charles is all smiles at the end of the day with dancers Gianina, Pressley, and Lily — until the video cuts to his outro.

Related | The 'Dance Moms' Finale Made a Statement for LGBTQ+ Youth

Turns out that Charles got way more than he bargained for, waking up to the grim realization that dancers everywhere face on a daily basis: dance is pain. In the outro, he claims that the soreness is almost unbelievable and that it's only been getting worse. He's tried muscle rollers and a hot tub soak, but is still dealing with aches and pains.

Watch the full video on James' channel, below, to find out just how sore an Abby Lee Miller-instructed routine will leave you.