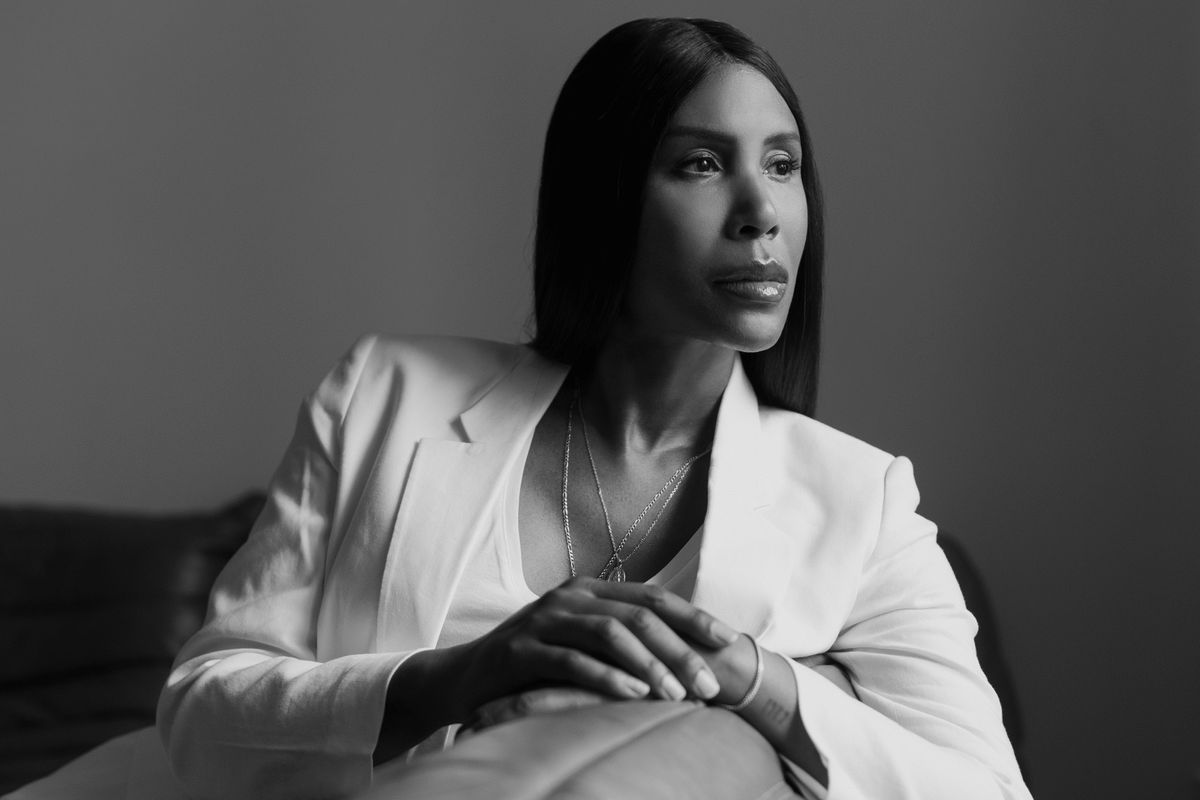 Being this far into quarantine, it feels like human touch is a distant memory. Once upon a time, we used to bump and grind on tightly packed dancefloors, moving as one giant organism with pulsing vibrations emanating from subwoofers. Globe-trotting DJ and producer Honey Dijon knows this sensation quite well. Commanding dancefloors anywhere from fashion week parties to clubbing institutions like Berghain with crowds ranging from a few hundred elite guests to thousands packed into a festival mainstage, Honey has seen it all from the behind the decks — and she loves every second of it.

Honey's latest effort is a love letter to nightlife's pleasures at its most hedonistic, decadent and Dionysian excess. Enlisting the help of animator Ciaràn McCusker, "La Femme Fantastique" follows the journey of an uninitiated clubgoer as they descend in to the depths of a X-rated bacchanal with Honey flying overhead and raining down liquid sex upon the denizens of the night. The visual is unapologetic in its celebration of sexuality. There's everything from exhibitionism to bondage, sex swings and pet play all taking place under the same roof in one great big orgy for the ages. It's nothing short of glorious and if any of that has you reaching for your pearls, all the more reason to press play.

In a way, "La Femme Fantastique" is utopic, envisioning a world of unbridled sex positivity that's deeply rooted in queer history. From cruising to bath houses, burlesque and sex parties that don't look terribly different from the one Honey lays out for us here, embracing unfettered sexuality has always been a cornerstone of queer culture even if Puritanical notions of decency have relegated them in the footnotes and margins.

On "La Femme Fantastique," Honey reminds us that we should never feel ashamed to express ourselves to the fullest extent and that alone can be a form of radical resistance. Ahead of the PAPER premiere of the fully uncensored video for "La Femme Fantastique," we caught up with the DJ to talk about the new single, her forthcoming album, house's raunchy history and her fashion line with Comme des Garçons.

How did the video for "La Femme Fantastique" come about?

When we were working on the album, we were trying to decide what we wanted to say artistically and I've always been a sex positive person. I've always believed that queer people, their narratives are always told by heteronormative society, we're always a reaction to that. So I really wanted to create a video that was speaking to queer people, wanting to tell their own story and celebrating sexuality, trans sexuality, nonbinary sexuality and what really happens in these queer spaces. Then, as you know Instagram is our friend, a really great cartoonist hit me up, he had been to one of my parties and he was like, "I really love your work and if you ever want to work with someone..." I saw his work and was like, "Oh shit, his work is really amazing!" So it was really organic about how the technical aspect of it came together from my vision.

It's something that we have been talking about during this album that I'm working on, Black Girl Magic, is that the songs are a lot more introspective, dealing with oppression and love. We're living in the social media age where people are bullied and attacked so much. One of the songs is called, "It's Not About You." I really felt like the music videos that I'm making and the album that I'm working on, it's a reflection of the moment that we're living in. The timing couldn't have been better, but it's really a love letter to queer people being unapologetically themselves.

Do you have a favorite moment in the video?

When I'm descending from the ceiling and dripping over the crowd. I love the part where the girl with the two buns opens up her legs. I love the ass clapping, I like the sling moment because everyone knows a sling is super comfortable in sexual situations. And if you don't know then I suggest everyone try it! But I think my favorite part of my video is that we just got the message out. I don't think, to my mind, that anyone in dance music has really been so unapologetically sexual with their work. That was super important to be.

"It's really a love letter to queer people being unapologetically themselves."

House and techno music has been around for a long time now, like 30-35 years, it's become a part of the mainstream and anything that becomes about the mainstream is always watered down for the masses. Where house music comes from, these were sexual spaces. The clubbing in New York, even now there's a resurgence, the queer parties are the hot parties and there's a lot of sexuality going on. Maybe in a weird way this pandemic is allowing these things to happen again: people are being less afraid to express who they really are, their sexuality. But to answer your question, I think house music and dance music culture became so commercial that sexuality got taken out for the masses to digest it. Especially queer, Black sexuality and trans sexuality. It was more about partying and shots and going to the club and it never really spoke about human expression for me.

A lot of the early Dance Mania-era stuff was really raunchy looking back on it.

Yeah, "I want to fuck you in the ass," and "ass and titties," like there's so many. "It's freaky motherfucker" by Mike Dunn, I could name hundreds of records that were very sexually explicit. Then it turned into like, "I want to go to the club. I'm at the club, meet me at the club." It became about that.

Speaking of the club, what's been the wildest party you've either played or been to?

Describe wild. Because I've been to parties where there has been wild abandon when it comes to dancing, where the whole room is just heaving and dancing and hot and people losing their minds. I've also DJ'd sex parties where I've seen people do stuff with they stuff. I mean I do reside in Berlin, honey, so you can imagine I've seen all kinds of stuff. Wild is relative for me, the only thing I find wild is when there's violence at a club. That's always really shocking to me, to see aggressive behavior at clubs. But I don't think anything that happens at a club is really wild.

Clubs are places for people to leave their inhibitions at the door, forget all the things that have been imposed upon them in the day world, and go out and let their freak flag fly. I've seen a lot of fucking at the club, drugs taken at the club, I've seen naked people in the club, I've seen naked trans people in the club. I have to say when I saw a non-op trans woman at the club in Europe just being so naked and free, that was really wild for me because there's so much shame regarding sexuality and trans bodies in America, and even for cisgender heteronormative people there's so much shame around body. To just see this trans woman with tits and a cock, a receding hairline, unapologetic for who they were was wild and amazing to me, because I thought, "Wow, someone should be so lucky to be that free. To have that amount of freedom."

"House music and dance music culture became so commercial that sexuality got taken out for the masses to digest it."

Are you worried that people are gonna just see the scandal and not the celebration of sex positivity?

I hope they do, I hope they see the scandal. That's more eyeballs on it, honey. I would be remiss if I didn't seek the scandal. Of course I want them to see this. Good artists are supposed to make people uncomfortable. I hope people are uncomfortable. The best reaction people could have is "Oh my god, I can't believe I saw that." But the worst is if someone's just like, "Oh, it's okay." That's not what I'm trying to do with this piece of work. Don't you like to be shocked?

The only shocking thing that we have right now is the idiot in office, so it takes a lot for people to be shocked these days. Sexuality is so common, everyone does it, or if you're asexual you don't but that is another form of sexuality. I don't understand why naked bodies or people doing what people do is shocking. Sex is like eating a piece of toast. It just depends on what side your bread is buttered, baby.

Tell me about the upcoming album.

My upcoming album is called Black Girl Magic and I'm really proud of this album because a lot of the things I've written about are really timely. It's about love, oppression, fighting back and taking a stand. I've worked with some really great Black female singers and songwriters: Hadiya George on "Not About You." There's some industrial techno moments on the album as well, which I think people will be quite surprised because people think I tend to make a certain type of house music. So it's a broad selection of lower temp things, more techno-sounding, industrial things, there's some ballroom influence involved, but I don't want to give too much of that away.

This album was really a more introspective album than my first one — it feels like a modern-day disco record as far as the lyrical content, not so much the soundscape, which is really reflecting about what's happening in culture and the human condition. Black Girl Magic is a celebration of queer dance music culture that I champion and come from. I'm really proud of this record and I think that's all any artist can hope. I don't know how it's going to be received, but I can hold my head up high knowing that I made music that not only I loved, but was done really well and with some really talented people.

"Black Girl Magic is a celebration of queer dance music culture that I champion and come from."

What are you listening to right now or what's got you really excited?

The new Jesse Ware album is really good. I've been listening to that a lot. Of course, I always listen to Sylvester, Sylvester always gets me excited. His Sylvester Live album is always on repeat. Believe it or not, I listen to a lot of '70s music. I love Fleetwood Mac, I love to listen to music that has more analog production on it. Like Roberta Flack, Earth Wind and Fire, Marvin Gaye, just for production, quality — Ashford and Simpson, Motown, I'm listening to a lot of early '90s dance music, too.

Yes! The next drop is at the end of August. That's really, really exciting. I just shot the lookbook in the look video. Quarantine for me was a really great time to be productive and finish a lot of projects that I was working on.

I'm just happy that this music is finally seeing the light of day, this clothing collaboration is seeing the light of day and, most importantly, that I'm able to contribute in some way to help people get through this time. I hope a lot of great art and music comes out of this period. I hope the project I'm doing gives people a little bit of pleasure during these complicated times.