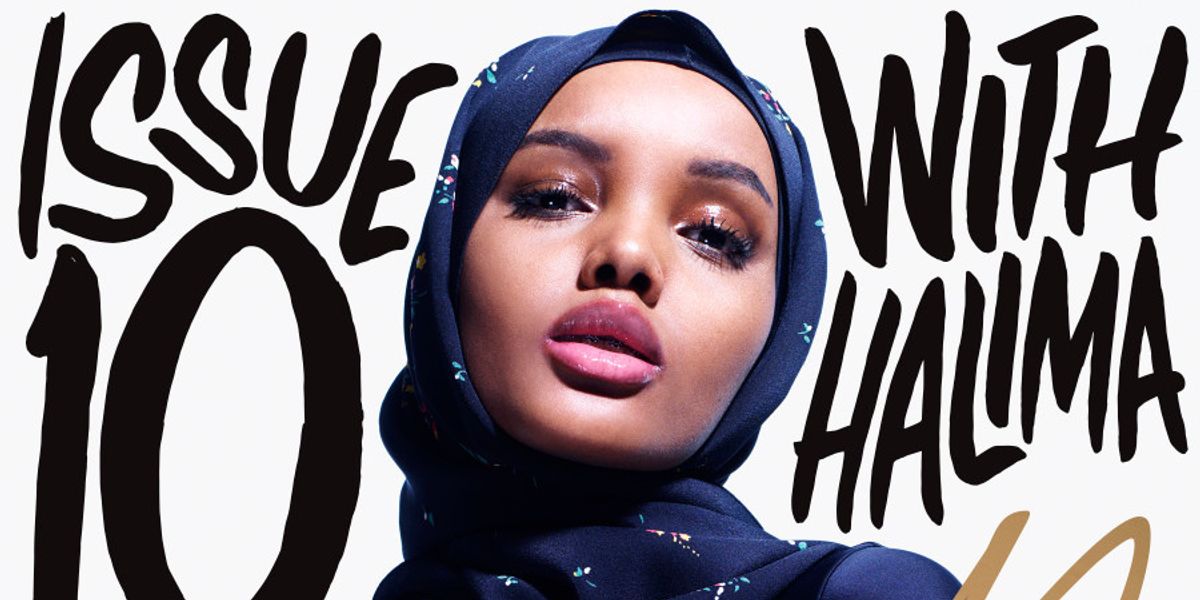 by Tom Prior
Justin Moran

Two worlds collided, or rather were brought back together, when Halima Aden and Carine Roitfeld paired up for a talk at Business of Fashion VOICES. Aden was born into a Kenyan refugee camp then moved to Minnesota by age 7. She hit headlines in 2016 as she threw out the dusty rule book of Miss USA and proudly donned her hijab, despite the surrounding community's attempts to discourage her from doing so. Carine, the iconic Parisian stylist who was at the helm of Vogue Paris for more than a decade, is a pioneer of fashion and chose Aden to star on the 10th cover of her critically acclaimed CR Fashion Book.

Related | Dries Van Noten on Getting Lost in Fashion's Circus

I met them both after their talk on Modest Fashion in the barn at Soho Farmhouse as they warmed up with coffee and each other. It was clear to see Aden and Roitfeld are obviously great friends, as well as artistic collaborators. They finished each other's sentences, affectionately praised one another, and giggled quite a lot. In the interview, we covered the triumphs and dangers of diversity, blocking haters on Instagram and the power of fashion.

Carine, who is exciting you at the moment?

Carine Roitfeld: Isamaya Ffrench. She's done my next cover, which is something very special. I love her. She started with me 2 or 3 years ago and she was no one in a way. I gave her a big door opening, introduced her to Tom Ford who she's now signed with. I'm always a good person to introduce and connect people. Isamaya is so funny, so beautiful and so clever.

Individuality is woven into the dialogue of our world now more than ever. What do you think of everyone having a public voice, loud opinions or people trying to stay woke?

Halima Aden: Oh my god. I think people don't have to try so hard. I don't have to scream my message out there; just by being present and doing what I'm doing sends a good enough message. Activism is so important to me. Women like Adwoa Aboah and Ashley Graham spread so much body positivity. Someone like Leomie Anderson's project LAPP is a perfect example of that, too.

What are your thoughts on Feminism?

Carine: [On the subject of female only platforms] I'm anxious about female only spaces. I'm the first person to defend women. But the present day has become so extreme when defending women, it makes me nervous. Of course, you have to pay attention and there are dangers out there, but I feel like boys in the future might be anxious to flirt or send flowers to a girl in case he gets arrested by the police.

And your thoughts on diversity?

Halima: We were talking about diversity earlier and I think the best message you can send is just by doing something. Don't sit around talking about it, just do it.

Carine: I hate this word diversity because it means you have two. If you use this word it makes it sound like we're all very different, but I don't think people even have to specify if they're gay or straight, for example.

Halima: Exactly. I don't need to explain my actions and don't expect anyone else to explain theirs to me. If society is saying "make it diverse," it doesn't make it genuine. If a designer pictures 10 white girls at a show, let it be. The same applies if it's 10 black girls.

Halima on Instagram: “Never thought I would see the day that a woman dressed like me would grace the cover of a fashion magazine. Thank you SO much…”

Issue 10 with Halima on the cover was a huge hit. What was the best or most surprising thing when it was released?

Halima: For me, it was huge! My Instagram blew up. I went from 250 followers, mostly high school friends, all the way up to 400k now. There was a lot of media attention. It's funny to be here at VOICES because it was Business of Fashion who broke the cover news first.

Carine: Covers are circulated instantly with social media now. it can be very dangerous and very bad. When people ask me what I'm doing for the next issue or cover I have to be very careful with what I do and say.

How do you both navigate the world of social media in terms of being an accessible public figure?

Halima: Honesty is the best way, but I hate how our generation now deals with differences of opinion. If people disagree with each other, they attack and that forces people to not say what they're thinking—and that's even more dangerous.

Carine: When I put you on the cover you received a lot of bad comments, but also a lot of good comments. The thing is people are anonymous. It's very easy to say something behind a keyboard. I give people chances, but have deleted comments on my Instagram.

What did you learn from your experience with Miss USA, Halima?

Halima: The pageant showed me that when people try to warn you and tell you not to do something you believe in, you should just do it even more. When people in my community found out I was entering in a hijab, other people's moms came up to my mom and told her to stop me from doing it. Now, those same moms are taking their daughters to the pageant for them to enter!

You've also been quite fearless in your work Carine.

Carine: It's true. With girls like Ashley Graham and Candice Huffine. I was the first to see the beauty and use those girls, like Candice in the Pirelli calendar. I always push the frontier for things I believe in. When you see a curvy girl she's like a painting, so beautiful.

Halima, what has been the biggest pinch yourself moment so far?

Halima: There's been so many. When I signed up to model I had no idea how far it would take me. I just thought OK, pictures and shoots. But on this journey, I've worked with Unicef and helping with things closer to home. So many doors have opened. Fashion is so much more than clothes.

Carine: It's true, it can transport you.