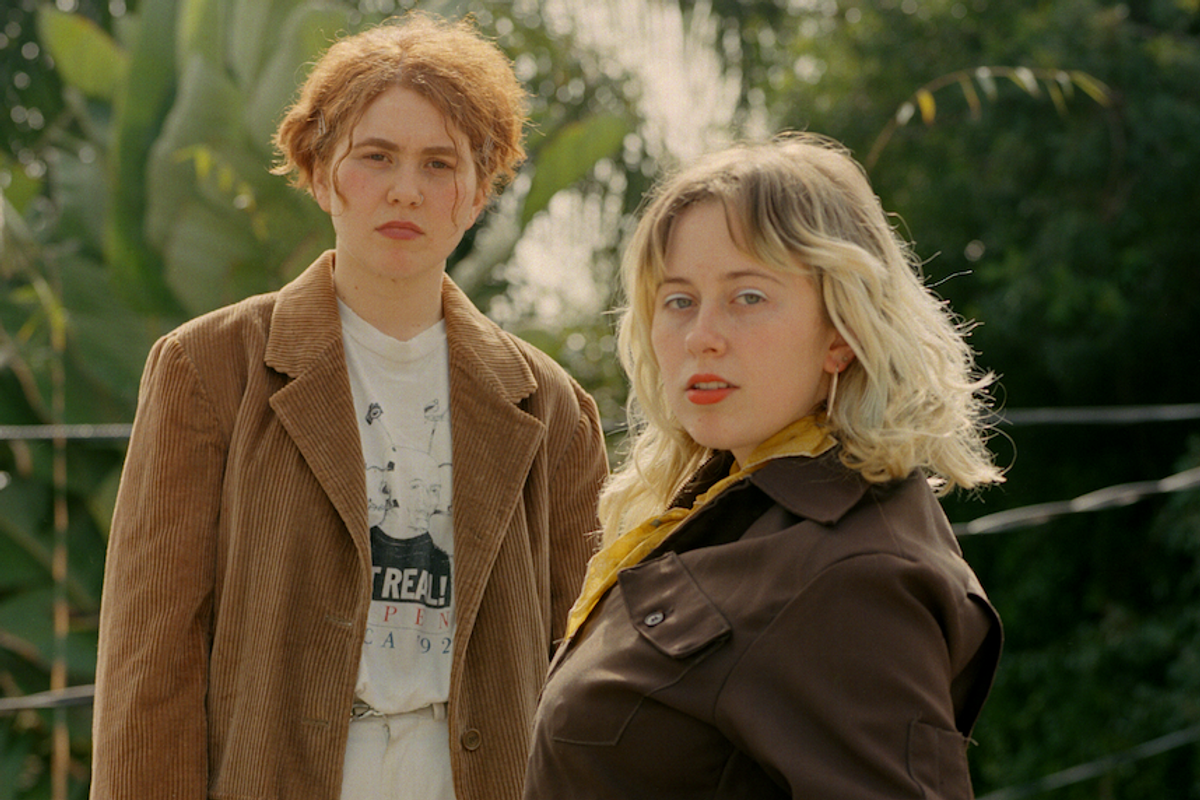 Girlpool on Growing Up, SXSW as Summer Camp and Making Musical Soup

There's a scene in Skins where Anwar compares Cassie to a "fairy on acid". He's intention is derogatory, sure, but you immediately get the visual. A fairy on acid is the ultimate representation of freedom and magic, but she's also a little dark, she feels everything 1000 times over and that weighs heavy. Girlpool is a sonic Cassie. Beautiful, yes, intriguing, sure, but with real fragility. Girlpool front women Harmony and Cleo not only have names that were destined to be used in the same sentence, but they have an uncanny knack of melding extremes to create some truly sublime, as Harmony describes it, "soup". Their sound is mutually mature and girlish, dorky and cool, and reminds the listener life is as wonderful as it is painful.

Girlpool are turning a brand new page from teen dream duo to a quartet, now incorporating drums and synth to their gauzy folk-rock. The four will take the stage in Austin over the next two days armed with new album Powerplant, their first release in two years and a entirely fresh perspective. If this is anyone's time, it's Girlpool's.

We caught up to Harmony and Cleo to talk SXSW, social conscience and if this kind of success was always part of the plan.

I feel like Girlpool has really skyrocketed in the last year or so, how has that been?
Harmony: It's been amazing, actually. Really crazy, but really, really cool. Really wild. Still can't believe it.

Cleo: Well making music and playing with Harmony, it just feels like a natural progression. It felt kind of necessary since we started making music together to do it with this kind of intensity and intention. I guess there's moments where I step back and look at everything and I'm stunned and excited, but also it feels like I've caught up with it all just naturally.

Harmony: It was about just making music with Cleo and whoever stumbled on it and liked it that would be how it was. It all just fell into place.

Tell me a little about being a young female artist in the music industry today, in a time where we're trying to fight for inclusion, do you feel pressure to be socially conscious and speak to that through music?
Cleo: Harmony and I have our beliefs and values and how we feel about the world, it all kind of pours into what we make. Our music turns into a soup of many, many things. As far as our music-making it's really about exploring what it is that we're trying to create in the moment. In terms of what we want to cover and represent it comes down to what we're feeling.

Harmony: I feel like we both have very strong views on everything. We can't accept every part of our person without fully embracing all of our views.

Cleo: Harmony and I, we're in a blessed situation where we get to choose who we work with and make sure above all else that we're in environments where we feel comfortable and able to perform naturally in every way. I think that's a hugely privileged position to be in. It's our biggest priorities if anything to feel that way. I think that in order for us to create honestly, we require to feel safe.

Is that feeling of being in a safe place to be vulnerable, with no one pulling or pushing you in any which way, difficult to come by? Is it a "privilege"?
Cleo: I think we seek out situations that feel good and if it feels bad we don't engage. There are a lot of things that feel bad.

How so?
Cleo: There are situations in any kind of industry or place of production where it doesn't feel like the intention is coming from the heart. We just seek that feeling and if we don't get it we'll find somewhere else.

You're also not making top 40 sugary pop, you're operating within genres primarily dominated by male artists. What's that like, to be a minority, as young females in punky-folk/rock?
Cleo: To be honest, I feel like in our world there are really fucked up positions to be in for people. It's tricky. There's a lot of shit and we're lucky, we're doing well.

What's it like going back to SX, now that so much has evolved with Girlpool since you were last there?
Cleo: I guess we're about to find out. It feels sort of like camp. We have a lot of friends that are going.

It must be so nice to have each other through every step of the journey as well.
Cleo: Totally.

Harmony: We've actually got full people in our band now, our friend Miles just joined Girlpool and Steven has joined on drums.

What's that like been for the dynamic between the two of you, to expand? Does it take some of the pressure off?
Cleo: It's been like invigorating. I feel so excited to put out this album. We haven't put out music in two years so it's like a new chapter for us. We just started with a full band, signed to a new label. It's super exciting.

Harmony: It so great to have friends around to be inspired by. It adds more color to the palette, which is really nice.

Literally a whole new chapter. How did that whole process go down, getting more people on board?
Cleo: We were working on new music together and we just felt excited about the idea of more instrumentation. There was space for the songs to get way more climactic. Harmony and I were just driving on the highway and I was just like "we should just get like a full band" and we just did it. We arrived at Harmony's house and she just texted a bunch of people asking if they wanted to play on the record. We just got excited and it feels really good. It feels right.

Girlpool's final SXSW show is 11pm tonight at the Elysium.