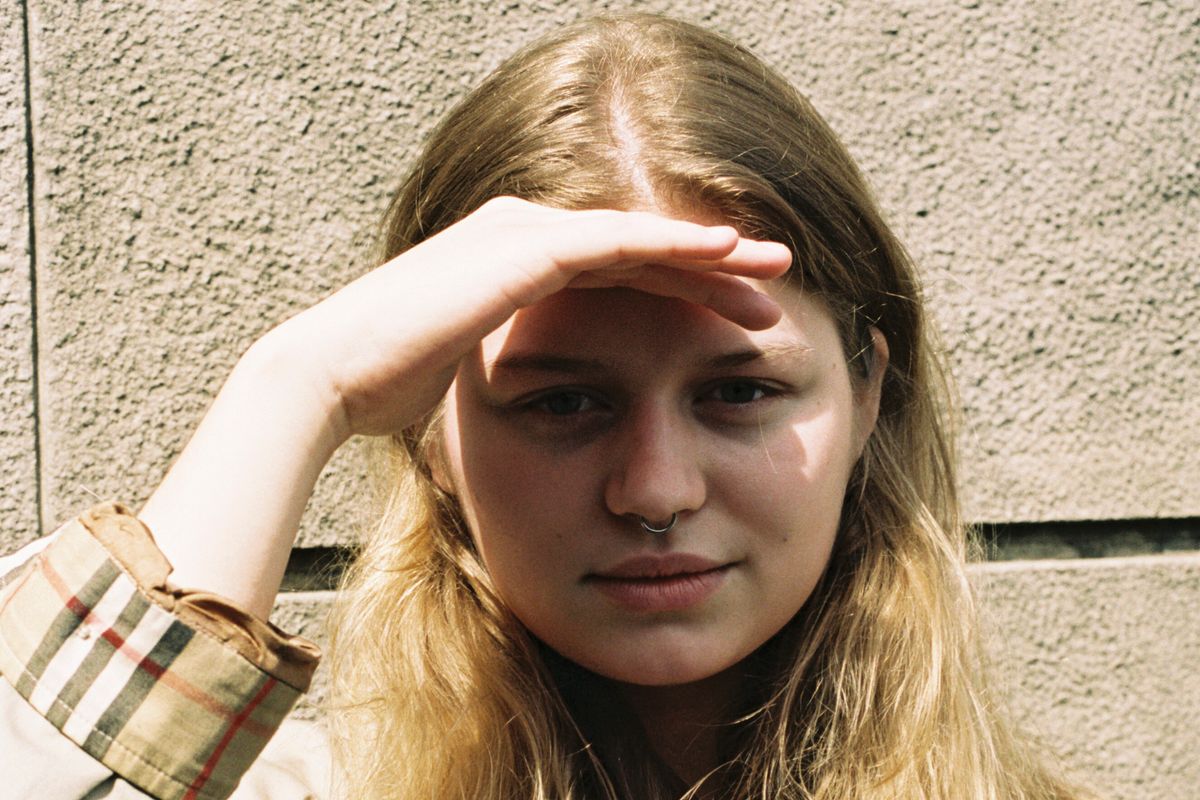 Marie Ulven wants to be the person she never had to look up to growing up. The Norwegian singer-songwriter gained a fanatical fanbase online over the past few years for her bedroom pop anthems about queer romance and mental health. The name of her project, girl in red, stems from the nostalgia of a teenage crush.

"I was in love with my best friend, and I was at a festival and we were looking for each other in the crowd and texting, 'Yo where are you? I'm here.' Room in the crowd opened up, she walked into that space and it literally felt like I was in a movie. The girl happened to be clad in a red sweater. Ulven, 20, recalls. "I just texted her 'girl in red' because she was really pretty and wearing a red sweater." They never ended up dating (she was straight), but a few months later, Ulven bought herself a red turtleneck and reminded of the experience, girl in red was born.

In 2017, Ulven officially began the project, garnering a dedicated audience off of songs like "girls," a hazy lo-fi pop anthem about having feelings for girls, and "summer depression," which details the realities of summertime sadness. Last year, she shared her debut EP chapter 1 with plans to continue her musical journey with a chapter 2 later this year.

In an interview with PAPER, Ulven reveals what it's like being viewed as a queer icon, how her music has helped the LGBTQ community and the catharsis of making music.

How did you become interested in making music? Was that always something you wanted to pursue?

Oh no, not really. I wanted to be a teacher for a really long time, but then I got my guitar and it was mostly a hobby. Then I got to 10th grade and I was just writing songs all the time. That's when I started questioning if I should be a teacher and if I should pursue this. I was writing Norwegian music at the time so I wanted to pursue that and be a whole different artist. I was just going to study music and see what happened, but then this happened. I never really decided, yes, I'm going to be a musician. I sort of just am, right now. I don't want to be anything else, though, so I'm really happy because I can't really do anything else with my life. It's so weird to say I'm a musician. But I am!

What do you think was your big break?

I'd agree with you, but I think really things picked up for you in the Soundcloud world. When did you start songwriting?

I started playing guitar when I was 14, so I started writing songs around that age. I had already improvised songs while singing in the shower, but probably when I got my first instrument, I started writing songs. I didn't like doing covers. I did that every now and then, but I didn't want to play anyone else's songs; I wanted to play my own songs.

Where do you find inspiration for your music?

In things that happen in my life. Maybe in the relationships I have with different people or what other people do. I sort of take inspiration from human things — feelings mostly. I find feelings are the most inspirational things ever. Usually, my music is about trying to capture some type of feeling. If I feel something that has a very distinct feeling, then I usually get inspired. I also really get inspired by the music I make.

You write songs about queer teenage romance, and that's something that wasn't always accessible. What's your experience been writing queer love songs as a young person? What are some of the reactions you've gotten to your music?

For me, it's been the most natural thing ever. At the end of the day, it's just like a normal love song to me and should be to everyone, in my opinion. It's just been normal and fun. It's mainly been: this is my perception of life and this is how I see things and this is how I felt, so I'm just gonna write about it. The reaction I've gotten to that has been really big from fellow queer people in the queer community, saying they came out using my songs or that it makes them feel safe and they're not alone because there are places that don't accept people for who they are. There are a lot of different reactions, but mostly they're all good and people just really feel like my music helped them in some way. I like that. It makes me happy.

Is there any memorable moment you can recall about meeting someone who told you how much your music impacted them?

There was this one girl who I met after I played support for Clairo in Dublin last year. She came up to me and started crying because she came out as bisexual the day before because of me. It's nice to read the messages and connect with people, but when you see someone being so honest right in front of you and being very vulnerable, that was an "A-ha" moment. It's hard to grasp the reality of all of this sometimes.

Do you ever feel any hesitation in feeling so vulnerable in your lyrics?

No, not really. Sometimes, at least, I'm a pretty straight-up person. For me, this is just like any other love song, so it's not like I feel vulnerable. I'm not scared, you know what I mean? I'm just gonna be out here, scream it at the top of my lungs. Be loud. Be gay. Whatever floats my boat and makes me happy.

"Everyone pretty much knows I'm gay because it's in the local newspaper all the time."

If you're comfortable, what was your coming out experience like?

It's very short and very sweet. I was on the train home from visiting my sister and it was 9PM, which isn't late but it was late when I was 16. I wanted to visit this girl because I was very much in love with her, but I hadn't told anyone that. Then I asked my mom if I could go visit her but she told me that curfew was in one hour and I had to be home by 10. She was like, "Why do you want to go there? You're going to be there for 50 minutes before you have to go home." And I was like, 'Because I'm in love with her.' And she was like, 'You gotta get home.' Afterward she became my girlfriend, and I brought her home. My dad was a bit confused. He's still a bit confused. He doesn't say, 'Oh, you're gay.' My mom is cool with it. My dad is like, 'Oh are you a Pride girl?' He's weird and quirky, but he accepts it. Everyone pretty much knows I'm gay because it's in the local newspaper all the time.

Something else really prevalent in your music is mental health. "Summer depression" is pretty explicit about that. Has writing about it been cathartic?

Yeah, I guess. It's a way of getting a feeling out. If you feel a lot, you write it in your textbook or diary. "summer depression" is this feeling I had every single summer, but I could never put a word on it. I just felt really shitty every single summer. When I made it, it was really nice. I sort of had an answer to it. Sometimes it feels like writing about it and making a song is finding a solution for it.

What have been some coping mechanisms for your own mental health?

I don't even know how I cope. I just freak out all the time. I think talking to people is a very good way to cope and get things off your chest, if you have it. Definitely making art makes me happy, but sometimes you've gotta have some sort of human connection. I think that's important: finding the right person who's just going to listen to you and not try to fix you, because it's going to take time.

"dead girl in the pool," your most recent single, has a very striking title. What's the story behind it?

I had just had a conversation about perspectives and how it's interesting to have different perspectives on things. Right after I hung up on the phone I had this line in my head, "There's a dead girl in the pool," and I had this whole vision in my head. It's sort of an out-of-body, surreal song, which I find interesting. This song is much more up for interpretation. It has a different perspective from my mind: how it can be distorted, fucked up, weird and can play mind games with me. Sometimes I can't always trust my own mind.

You have an EP coming this fall. Can you give me any details on what's going to be on it?

One song is completely rock 'n' roll and is going to create the biggest mosh pit on my U.S. tour, and the other one is where I talk about my existential crisis, which is on-going. It's going on 24/7, so that's gonna be great. That's to wrap up chapter 2 of the music I've been making the last year. I've grown as a producer and songwriter the past year and these EPs will stand for that.

Do you plan to release a full-length album?

I have a folder on my Mac that says "Album 2020" but we'll see what happens. I'm not sure I'm going to be able to do that. But I want to make an album because the ideas I get are like, this is album material.

Do you feel like you've become a queer icon of sorts?

I mean, I don't necessarily look at myself as anything, but I know a lot of people look at me like that and I'm totally fine with that. That's super cool. I just look at myself as Marie, and I think I always will. But I'm really happy people have someone just like them and can be like, "Yes, this girl is doing okay. She's gay. She's open about it, and she's living her life." I've said this before, but I really wish I had someone like me when I was a bit younger so I felt safer. But now we have Hayley Kiyoko and King Princess being really loud and not apologizing for it. I'm very happy I'm a part of this queer icon wave. I love that for us.