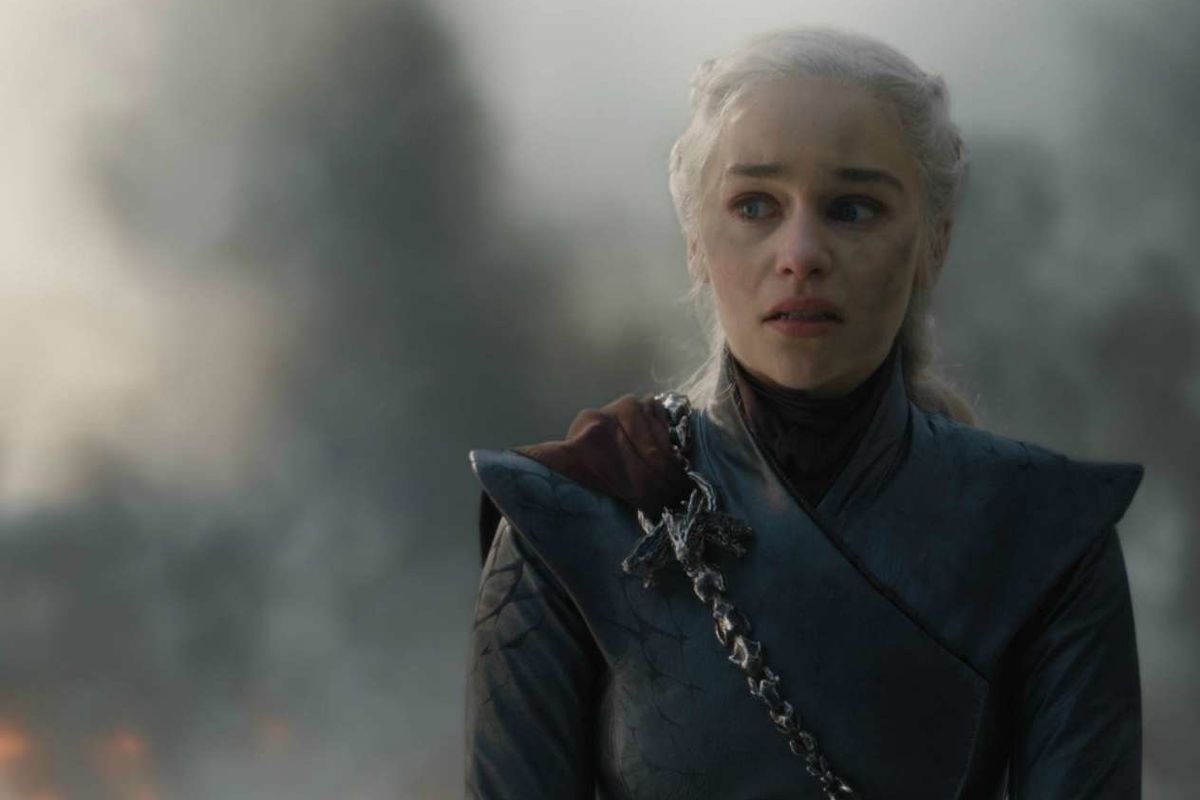 'Game of Thrones' Recap Episode 5: The Mad King Leapt Out!

Last night's episode of Game of Thrones episode was fucked up. There have been a lot of fucked up episodes of Game of Thrones, but this one was the worst (or possibly best) explosion of violence, cruelty, betrayal, fire, insanity, madness, and more fire. What was intended to be the simple taking King's Landing turned to raping, pillaging, and a genocide's worth of unnecessary murder. After all of the ash settled, here's everything and everyone we lost last night, and what we kept.

Faced with an army of Unsullied and fierce Northerners who don't forget, the people of King's Landing ring the bells that signify surrender. It doesn't matter though, because Daenerys has fucking snapped. Like, Thanos snapped. She quickly destroys the Golden Army and most if not all of the citizens she wishes to rule over by burning them alive, leaving Cersei her only option: leaving. Jaime goes to her after he kills Euron, which I don't care about, and they die together in a pile of rubble. That's it, they just fucking die together. In King's Landing. In their home. Where they've lost their father and their children and fell in love (ew), and it's all so emotional. I'll say it. What was the reason?

If you had told me the twins were going to die this episode I would've believed you, but I would've imagined something better than this. To think I actually thought Jaime was valiantly riding to King's Landing to kill Cersei. Clearly I couldn't see through the clown makeup I must've put on. Cersei was easily the best character on the show, and for her to go out like that was a waste. You can fight me on it if you want, but it must be said: of all the deaths in this show's whole history, Cersei's hurt the most. She came from essentially nothing to sitting on the Iron Throne, and Lena Headey is such an amazing actor. In fact, I would like to say that she is the first and only actor to ever live! That's how amazing she is. You can say they were the architects of their own deaths; Cersei refused to surrender while Daenerys was still even a little bit sane, and Jaime refused to ever refuse Cersei, but I don't care. I feel like the writers owe me money.

Bran and Samwell told Jon who told Arya and Sansa, who told Tyrion who told Varys the worst kept secret in Winterfell. Jon is actually blah blah Targaryen, and that coupled with his level head and obsession with honesty clearly means that he should rule the world. Or something like that, we never got to know the intricacies and drama of Varys' plan, because Varys, world famous for stirring the pot and not getting caught has finally been caught. The Mad King Daenerys had him dracarys'd for conspiring to protect the world from her.

Daenerys has fully lost her entire fucking mind. Like, actually. Some people online expressed shocked at the turn of events, but we knew from the beginning that she had this in her. She comes from a long line of inbred, ice blonde, power hungry megalomaniacs. After the beheading of her best friend by Cersei, Dany's left in a real funk. She gets out of it by toasting Varys alive, after which she's back to her fighting form. She then brings the rest of her army and her last dragon back to King's Landing (which takes like, 20 minutes now apparently) to finally, by any means necessary, take the Iron Throne.

What follows is purely Machiavellian.

Daenerys hears the bells of surrender, but can't really register the sound over the sound of the Mad King's voice screaming in her head. Or the voice of her brother, or Missandei, or Ser Jorah, or Khal Drogo, or her two dead dragons. I will say she's lost a lot of people. Her insanity hasn't appeared from nowhere. Everyone left on this show must have PTSD like I can't even imagine. She torches the city, slaying thousands of innocent people. The havoc, chaos, and death she delivered to those people, both innocent and not, was apocalyptic. It's like she decided at the last second that she didn't even want to take King's Landing, she wanted to kill it. No one loves her? Fine. She said it herself, she rules by fear. Her mind.

King's Landing and All of Its Citizens

This poor city. At least when Pompeii was destroyed, I didn't have to watch it. Daenerys tears through that golden city block by block. For a mad woman, she sure was thorough. Women, children, animals: literally everything was burned. What wasn't burned was brutalized by the unsullied, Dothraki, and even Jon's army.

Honorable mentions: Euron died (finally), The Mountain and The Hound died. It was touching but kind of the least important thing to happen in this episode. Also: Dany's hopes and dreams of ever being liked.

Arya and Jon made it to King's Landing, witnessed the destruction, and survived it all. These two are by no means sheltered, naive children, but the things they've seen in this episode alone! Ayra has never trusted Daenerys; she didn't carry as much paranoia as her sister Sansa, but she kept her distance, and we know that Jon was sworn to her. Hopefully now that's all over. It better be. Jon sees the full extent of his current aunt and former lover's bloodlust, and Arya (as you may remember) is that bitch.

We didn't lose Tyrion this episode, but keeping him almost feels sadder. He was right. He was right about Cersei and no one believed he was going to be. Cersei surrendered. For a second there, the peace he so longed to establish looked like it was possible. Instead he saw the death of his home and his siblings. He is now the last Lannister on Earth.

It's hard for me now to see that beast as a pet and a pseudo-child of Daenerys' and not a weapon of mass destruction. I guess he has lost a lot too, in the death of his two brothers, and he was just following orders… but it looked like he was enjoying it as he torched King's Landing to ashes. So fuck him.

Related | 'Game of Thrones' Recap Episode 1: Reunited and It Feels So Messy

This is our only hope. The prophecy can still prove to be true. Melisandre (RIP) told Arya way back in the happy days of season three that she was destined to shut "brown eyes, blue eyes, and green eyes." The blue was the Night King and his army, the brown was probably most of everyone else she's murdered, let's say Littlefinger, and she, as well as I, thought the green eyes would be Cersei's. Alas, she didn't get to kill Cersei, but as we all know there's a certain dragon-riding mad woman with green eyes. That's all I'll say.

Each episode it becomes more and more apparent that the writers of the show, Beavis and Butthead, don't really seem to care about me. To give them the smallest amount of credit I can, the show has outrun the books and they kind of have to make this all up. Regardless, I'm mad. I miss the Night King and his White Walker army and now I miss the Lannisters. Perhaps it's just seeing the world I and so many other fans inhabit come to a close that has me missing pure evil. Perhaps it's because I'm an idiot. I suspect I'll miss Daenerys when she dies too, but today I hate her. There's only one episode left, and I don't see it getting any easier before the show concludes.