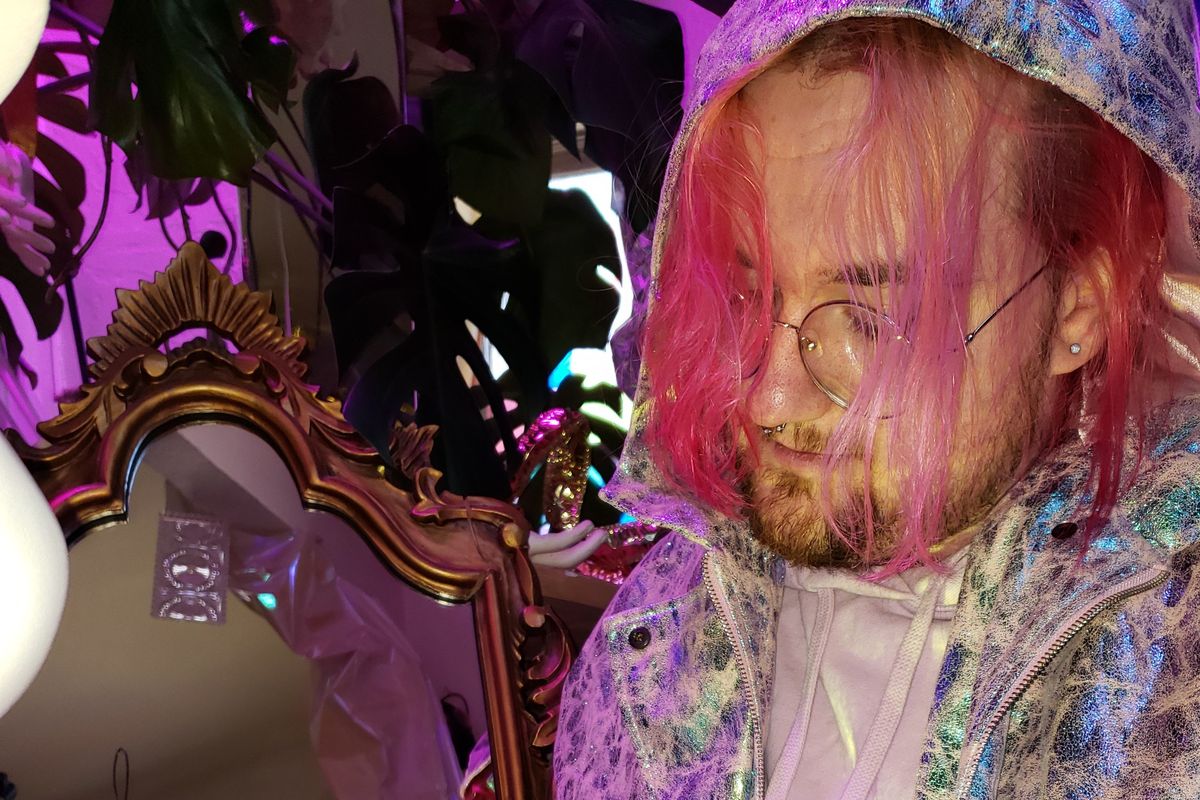 Galen Tipton Is an All-Powerful Trans Deity on 'Goddexx'

Ohio-based visual and sound artist, galen tipton, has returned with a brand EP meant to sonically encapsulate an all-powerful trans deity. And if that hasn't already piqued your curiosity wait until you hear how insane the music is.

The new five-track offering from tipton, goddexx, is crammed full of frenetic percussion patterns, intricate melodies and fast-paced blood-pumping bass that carries on in the hyperactive club tradition of artists like Iglooghost, Kai Whiston, Ultrademon, Machinegirl and more. From the glitchy fairy choruses on "girl dick" to the nightcored debow of "cry gold," tipton manages to keep the listener on their toes with frequent curveballs and change-ups while still hitting them with a barrage of slick and almost cartoonish sounds.

Not only is goddexx a stunning sonic thrill ride but the release serves as a testament to tipton's perseverance. Originally made during a dark period of tipton's life where she was dealing with fallout from an abusive relationship and coming to terms with her own identity, goddexx ended up becoming a way for her to imagine herself overcoming adversity. Deriving an immense power from vulnerability, Tipton explains that by almost role-playing this deity she was able to "[imagine] being able to take on power structures and inflict damage on those that hurt me was super cathartic."

Out on Bandcamp via the mystical nightlife collective, unseelie, galen has pledged as an added incentive to finally quit her day job if she's able to get 200 people to buy her EP. So you know what to do.

I'd love to start off with where the inspiration for EP came from?

I started working on the record during the ending stages of an abusive relationship and the breakup and recovery that followed. During this time I was also coming into my identity as a nonbinary trans girl, (the girl part was something that had been on my mind for a long time and it was starting to feel like the right to time to own that aspect of myself). I was watching a lot of anime at the time as a coping mechanism to all of this emotional turmoil, mostly shonen type stuff where weak characters suddenly had immense amounts of power to take on any obstacle. This EP was imagining myself as this type of character, able to take on anything from internal struggles to social constructs that want me and others like me dead.

Tell me more about this deity, what is their power like? How do they manifest in the world? What's the backstory?

For the anime/ manga fans out there, goddexx is like the final moments of the Midoriya vs. Overhaul fight during the Shie Hassaikai Raid arc of Boku no Hero Academia. Like that pure rush of crushing something that felt totally unstoppable, something that never was going to let you win or survive. goddexx's powers are like suddenly shattering a boulder you've been trying to move uphill your whole life. Just pure power to take on whats keeping you from living.

How did you go about translating this concept into this EP?

I think a lot of it has to do with the fact I was making it while going through these hardships. I was just making these tracks to heal, to escape, to stay afloat. It wasn't necessarily a conscious translation but just something that evolved over time and helped me work through this time of my life.

What is your favorite moment or element of the EP?

From a sonic standpoint, I really love how just the whole ending of "butterfly drinking blood" came together. For me that moment is just pure ear candy and a moment that just takes me out of it being my own music. It makes me feel like a listener that just discovered a super cool beat on Soundcloud and I cant wait to show my friends lmao

What do you hope people take away from this release?

That they can do fucking anything. That no matter how hard shit gets healing and surviving is possible. That sometime healing is ugly and can happen at a much slower pace than you want. That its just as important to loose yourself and mosh in the club as it is to dance.