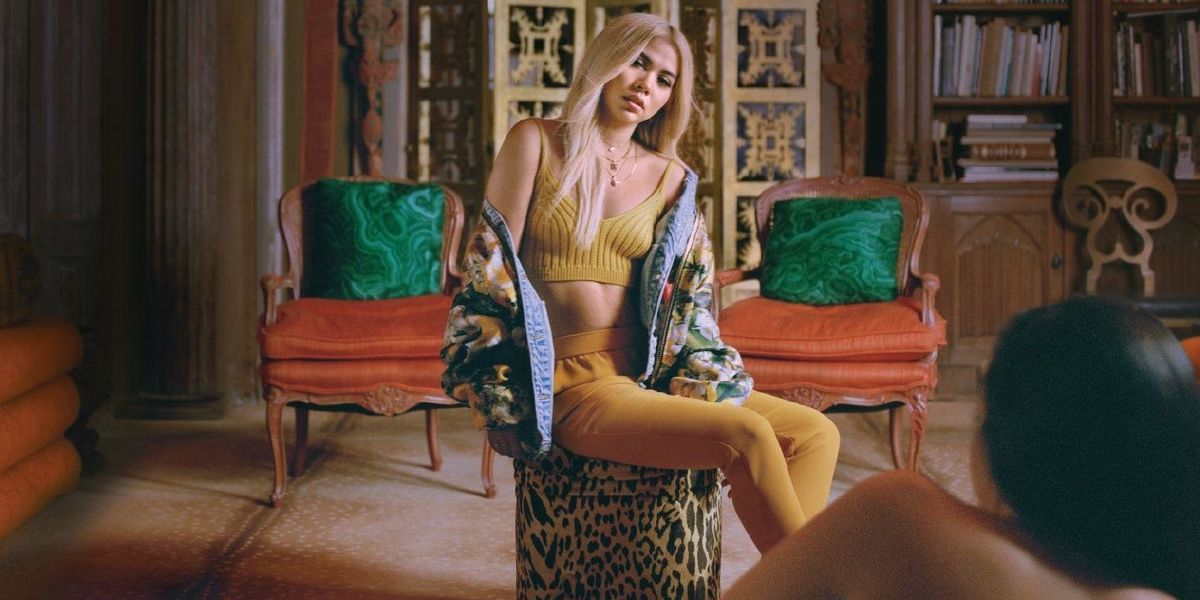 Kicking off this week's playlist is Brooklyn DJ and artist Lauren Flax and UK-pop singer-songwriter Little Boots team up for the dynamic "Picture." Little Boots, the moniker for Victoria Hesketh, paints a moody picture *no pun intended* about that ex who interrupts your progress post-breakup. Raise a hand if you relate! "I was doing okay until a picture pulled me back/ Right back into my tracks," Hesketh coos over Flax's sweeping production, which expertly builds tension with hi-hats and minor-key chords. "Picture" is the new single from Hesketh's forthcoming female-based EP, Burn.

Heating things up: Brooklyn-based feminist dance music collective Discwoman teams with Berlin producer Physical Therapy's Allergy Season label for their second Physically Sick collaborative LP. The first came out the day before "the inauguration" that has made us all physically (mentally/emotionally/spiritually) sick. Viva la resistance! Speaking of! The best track in this tracklist of expansive avant-garde greatness, is, in my most humble opinion, track #13, DJ/producer BEARCAT's track "VIVA," which switches, shines, and shimmies its way into your bones. You'll have no choice but to want to work the room, the office, the courthouse steps, or wherever you find yourself living authentically and for the most honorable cause of resistance. Speaking of, proceeds of this record are being donated to the Brooklyn Community Bail Fund. Who said you can't sweat it out and also draw attention to our wrecked American prison industrial complex?

What can be said about the incomparable Ms. Toni Braxton? How many times have you sang horrible karaoke renditions of "Un-Break My Heart" or "He Wasn't Man Enough?" Those are just a few classics from her inimitable canon. We've had other (dramatic, public) episodes to Toni's music, too, but catch us offline for those details. Anyway, the husky-voiced grand dame of sass and sex appeal is back with her first album in eight years, Sex & Cigarettes. It arrives next Friday, March 23, and she's out here looking like a whole meal and sounding as if it's still 1996 -- which are hallmarks of untouchable greatness. This album's title track (and third promotional single) dropped today, and yes, it's a powerballad of string, piano, and stirring vocal. But listen closely: Toni's voice is so closely mic'd that you can hear her getting choked up about whoever the fuck cheated on her (what a LOSER) and thus inspired her to write and sing this jaw-droppingly gorgeous tune. Truly what is there to even say.

Something about this romantic and sensual new song by Troye Sivan (from the soundtrack of critically-acclaimed new queer love story, Love, Simon) is very Lana Del Rey in the best possible way. It boasts a boom-bap rhythm section, a melancholy synth line, and a melodic and sweetly airy performance by bb Troye. The descriptive lyrics tell a nostalgic, bittersweet story of first love: "Remember when we first met/You said 'light my cigarette'," Troye sings in the first verse, and we're hooked instantly. As we all know, first love never lasts, but this song beautifully captures the romance inherent in puppy-love memories: it's all so fleeting, but unforgettable. Grab a Kleenex for a nice big ugly cry, and we'll be waiting for that Troye x LDR collab (pleeeeeease) though, I'm not sure our hearts can take it.

I was not aware, but apparently a bunch of your faves from Lady Gaga and Miley Cyrus to one of mine, Mary J. Blige (!!!) and a handful of others are all recreating Elton John classics written with longtime collaborator Bernie Taupin. The two eclectic albums will feature a range of Sir Elton's hits from his 40+ year career and are called, fittingly, Revamp and Restoration. One of the new singles from Revamp, a re-imagining of "Don't Go Breaking My Heart" is a duet between hip-hop legend Q-Tip and vocal powerhouse Demi Lovato. The combination doesn't sound like it should work, honestly, but Demi's cool, above-the-fray restraint (i.e. only hollering/showing out where appropriate) pairs really well with Q-Tip's smooth vocal and the sultry musical arrangement. The whole thing is niiiiice. Listen below, and watch the video, here.

Sigrid, the 21-year-old Norwegian pop upstart, who once warned us not to kill her vibe, is back with new single "Raw," the latest in a string of singles from her imminent debut album. The song features spare production and Sigrid's delicious vocal fry. She sounds righteously pissed -- the lyrics address critics/lovers/anyone who wants her to be anyone other than who she is -- and we are here for it. Sigrid sounds totally in her element. I don't know about you, but I'm so here for this generation's wave of confessional songwriting, especially where female artists are concerned. Frankly, it's never not breathtaking to hear strong female voices air it all out over accessible pop music that seamlessly blends elements trip-hop, hip-hop, and trap-lite. Lorde and artists like Sigrid all owe an unpayable debt to their forebears. Lookin' at you, Fiona Apple, Lauryn Hill, and Portishead's Beth Orton. BRB, joining the planning committee for Lilith Fair part two.

Lissy Trullie -- an American model and singer-songwriter who in my opinion, is criminally underrated -- is back with a new single "Here." She sings, "you can find me here," and it sounds as if she's never left. The bassy synth line is grimy enough to make you dance, and sinister enough to keep things interesting. Also, there are cowbells (!!!) which is not a no. The way I'm describing this bop makes it sound like a lot is going on. And there is, but it's in onion-style layers, that unravel to reveal themselves with multiple spins -- which isn't that what a great pop song does? "Here" is like bright, shiny plastic on the surface, all liquid metal underneath. On the single's cover, Trullie is smiling, but it's like the upside-down smiley-face emoji, personified. "Sleep with me for a thousand years," Trullie croons in her sultry alto -- a come-on and a threat all at once.

We love "Let It Be" from 26-year-old L.A.-based Hayley Kiyoko is the latest promotional single from her upcoming debut Expectations. This one is all about the melancholy of letting go of the one you love, and features a choir of angelic Hayleys in the anthemic, foot-stomping chorus. Sonically, the song's country flair -- there are tambourines and twangy guitars in the mix of trap breakbeats and airy synths -- conjures the feeling of wide open space, which feels appropriate, because letting go means acceptance; which means out with the old, end with the new and blissfully unfamiliar territory.

Saweetie is like a hybrid of legends: the slick mouth of Slick Rick and the pussy-empowered politics of Foxy Brown, thus making her an up-and-coming legend in her own right. The Bay Area native's EP High Maintenance drops today and features a number of certified bangers, including "ICY GRL" a squad-touting revamp of Khia's iconique "My Neck My Back." But we love "B.A.N.," which broods and boasts about putting corny dudes in check and wildin' out with the crew. Get into She.

Let's just say that Baby Yors, the 24-year-old rising queer Latin pop star, has studied the Bible of Queen. "Bad Influence" gets theatrical immediately with synthy, drum-heavy, dim-the-lights production and a vocal range that finds him cooing, howling, and climbing the the stairway into his heavenly gorgeous falsetto. The last minute of the song is really the clincher, though: the song creeps suddenly creeps to menacing pace, the instrumentation largely drops out, and give Baby Yors space to give us his best Billie Holiday. Woozy, seductive, and pensive, put "Bad Influence" on to revel in your lush Sunday night blues.