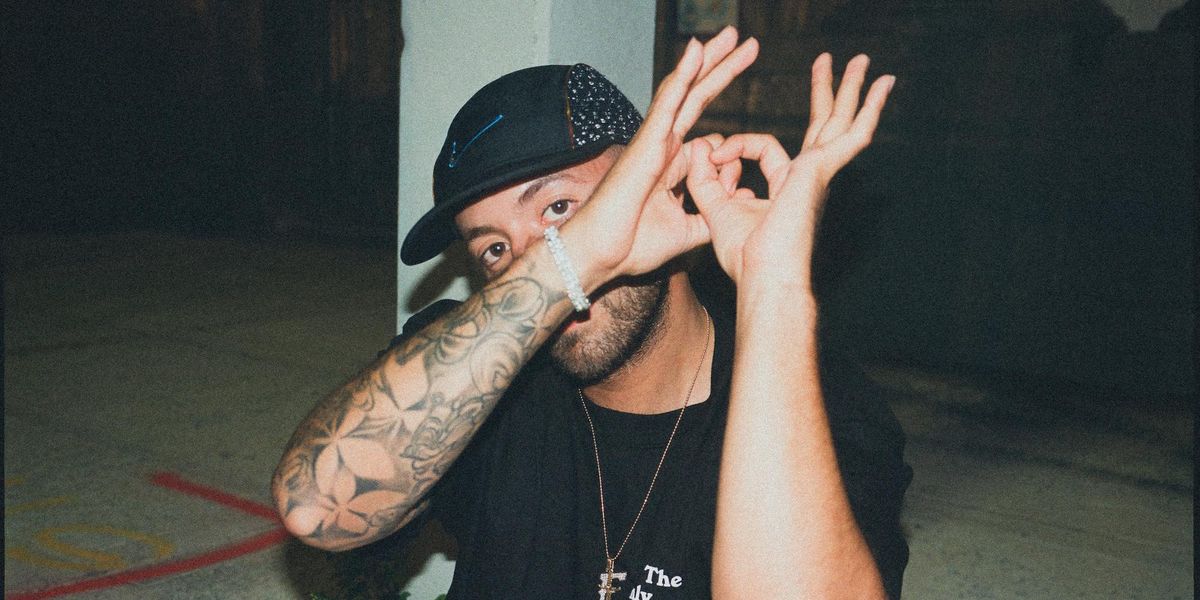 Reggaetón music is rooted in Panama and Puerto Rico, but in the Colombian wave that's taken over the genre, there's no artist repping his home country harder than Feid. With hits like "Chimbita" and "Purrito Apa," the Medellín native uses Colombian slang and references to the culture that have made him a musical ambassador for his people. In the recent protests that have put Colombia in a global spotlight, Feid's fans are using those songs' lyrics on posters to send a message to the government.

"That's such an honor that people are using my words to say something to the people who are not doing good things for them," Feid tells PAPER. "People in Colombia are super connected with my music right now. I'm always reposting them because I'm their voice right now. I'm the voice of those people who want to do something big like me."

Feid, born Salomón Villada Hoyos, started out as a voice for other artists. A decade ago, he met Alejandro "Sky" Ramírez, J Balvin's main producer, in school. When J Balvin was looking for a big hit, they enlisted Feid to help co-write "Ginza," which became a global smash in 2015. After that, Feid became the go-to writer for Latin acts across all genres like CNCO, Anitta, Thalía, and fellow Medellín breakout Maluma.

"At the beginning, it was cool because I was linking with a lot of people," Feid says. "I was learning and traveling and everything, but it wasn't that cool when I started spending more time doing music for other artists than for myself."

Related | Mr Eazi Is a Household Name in Every Language

Feid's first album with Universal Music Latin, 2019's 19 was nominated for a Latin Grammy Award for Best Urban Album. He kept the momentum going into last year with his own breakthrough hit "Porfa." The title is Colombian slang for "please." He amplified the song's success with a super remix that included J Balvin, Maluma, Sech, Nicky Jam and Justin Quiles. "I'm a cool guy and I'm always doing favors for my friends," Feid smirks. "With that remix, I was like, 'Yo, I need you to repay those favors.'"

"Porfa" marked the beginning of Feid using Colombian slang in his music. His follow-up LP FERXXO (VOL. 1: M.O.R.) received another Latin Grammy nomination for Best Urban Album. "Mor" is Colombian slang for "Love." In the sentimental final track "AVXNTADXR," he sings in Spanish, "Boss flow, but I'm not a drug dealer." With shows like Netflix's Narcos, Colombia has a history of being stereotyped in the media as a war-torn country run by drug lords.

"I think more people have to know about the cool parts of Colombia," Feid says. "Everyone knows the sad part, like the war part, the narco part, but there's a lot of people doing art, sports, and cool things here. I was thinking how can I make people think differently about my country? That's why I started using those words."

In "Chimbita," Feid highlights Colombia's nea lifestyle. He defines the word as "a guy from the hood." Feid adds, "He just has the things that the streets can give you, like a bike or maybe your haircut." Feid proudly rocks the nea haircut that's like a mullet with the tail dyed blonde. Before the protests, his Instagram Story was filled with Colombian fans playing the song on their motorbikes or showing off their fresh fades.

"I want to put all those things from Colombia outside because Colombians are so rich in culture," Feid says. "The hairstyles. The way they talk. Everyone in the world loves how Colombian girls speak. I want to make stronger the strengths of my country and keep pushing those cool things so people can see more of it."

On April 28, massive protests began in Colombia after President Iván Duque Márquez proposed a reforma tributaria, or tax reform bill that would've disproportionately raised taxes on the country's poorest citizens — as if the government's poor response to the ongoing COVID-19 pandemic wasn't enough for people to deal with. Videos surfaced online of police shooting and killing protestors.

"That's so sad," Feid says about the videos. "That even made me cry. I didn't know that kind of stuff could happen in my country."

Márquez withdrew the reform bill on May 2, but the protests are still going strong. The growing economic poverty and inequality from the pandemic is what the protestors are wanting Márquez and the government to address. Colombian titans like Shakira, Juanes and J Balvin have all called for Márquez to work with the protesters instead of responding with excessive police force. 42 people have reportedly died in the protests. Feid addressed those inequalities in his #SOSColombia freestyle on Instagram.

"If you see the doctors who have to treat people for COVID, they're just wearing plastic bags," Feid says. "The soldiers outside have like hard armor. That's not fair. Why do you spend more money killing people when you should be spending money saving lives?"

This past weekend, Feid joined Afro-Colombian group ChocQuibTown in a march in Miami to show solidarity with the protestors. There was also a solidarity march in New York City where a person had a sign in Spanish that read: "The only 'Chimbita' (beautiful thing) would be a better government."

"Seeing all those Colombian people feeling proud of their country, that was so special," Feid says about the march. "Colombia has a lot of people who are struggling right now and when you can support them just the way that you can, it's so much better to spread love than spread hate. I'm spreading that love and sense of peace."

To respect the situation going on in Colombia, Feid pushed back the music releases he had planned for this month. He promises his next single "Fumeteo" and follow-up LP Intershibuya La Mafia are coming soon. In the one detail Feid gives about the album, he calls it his "graduation from reggaetón."

"I don't care about any numbers or any charts," Feid adds. "I just want to see people having fun with my music. I'm always dropping music for the people."

The 'Call Me By Your Name' Sequel May Not Be Happening

Ellie Kemper Was Crowned Queen of an Allegedly Racist Ball