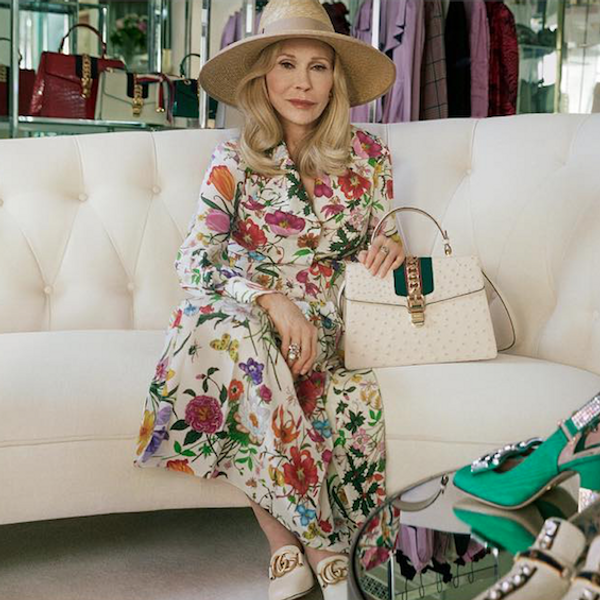 Faye Dunaway Is Back with a New High Fashion Campaign

The newest face of Gucci is a style icon that proves age is just a number, as it is Faye Dunaway who is featured in the design house's new ads for their Sylvie bag. The advertisement was shot by Petra Collins, who is currently a widespread collaborator with the brand and creative director Alessandro Michele and includes a handful of still images as well as a short film.

At the age of 77 (though you wouldn't know it by looking at her!) Dunaway stands more as the original inspiration for Gucci's vintage vibe than the youthful surge of retro-seekers. Though, in these new fall ads, she proves that the OG is always going to be the best — and we should all be so lucky as to look like she does in the line, today.

Gucci on Instagram: “Award-winning actress #FayeDunaway stars in the #GucciSylvie campaign shot by @petrafcollins, together with singer, songwriter and actress…”

The campaign has a "lives of the rich and famous" vibe to it, as the stills depict Dunaway lounging on a tufted white couch in head-to-toe florals, surrounded by Gucci-branded accessories in the foreground and background of the frame. In another image, she wears a white lace tracksuit, leaning against a tennis net.

The film drives the point home, as she stars alongside musician Soko who plays her daughter, as the pair hang out signing headshots in an '80s-style white limo, stroll Rodeo Drive, sit poolside and play tennis at her sprawling Beverly Hills mansion, and closes with Dunaway gifting Soko one of Gucci's Sylvie bags in a bright white tone.

Gucci on Instagram: “Debuting the new campaign for #GucciSylvie featuring the archive-inspired bag designed by #AlessandroMichele. #FayeDunaway plays a…”

Throwing the "norms" of models' age to the wind, Gucci casts Dunaway in this campaign on the heels of their Cruise 2017 collection, which featured Vanessa Redgrave, who was 80 at the time. While we wait for other high fashion brands to follow suit, it seems only appropriate that Gucci lead the pack, considering Michele has most iconically popularized the chic vintage vibe that has grown so popular over the past few years — and shows no signs of slowing.