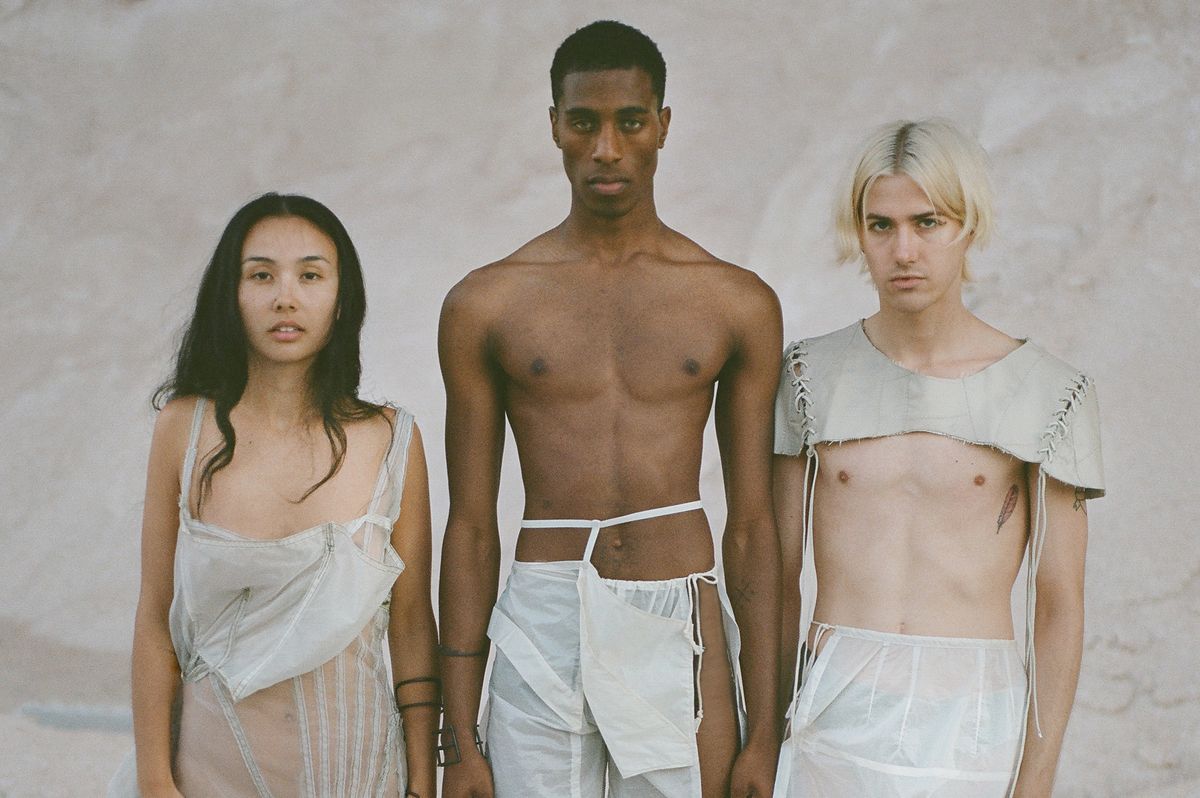 It's not easy to see the positive in any kind of conflict, much less something as devastating as war. But for designer Elena Velez, there are points to pick apart: The possibilities in rebuilding post-destruction, for one.

Her latest collection, _and carry on, is a reflection of the in-between, with garments deconstructed and disconnected, somehow looking both delicate and incredibly sturdy — like half of a short, wide-armed trench, or a loose, skewed-to-the-side corset with metal bits jutting out at random. These pieces look only partly put together by traditional standards, but whether they seem closer to completion or total disintegration is subjective to the viewer.

Velez, has been designing since childhood, is a recent Parsons grad, having studied both in Paris and New York. The Puerto Rican designer is based in the latter now, but takes trips back to Milwaukee, where she grew up, on a regular basis.

When PAPER caught up with Velez to learn more about this new collection, she also excitedly told us about the Wisconsin city's flourishing creative community. Despite travel figuring heavily into her education and career (she's worked and interned in Australia and did a year abroad in Brazil, too) and making solid connections in New York, Velez says it's important for her to keep contributing there.

Read our conversation, below, to find out why, and learn more about the inspiration behind _and carry on.

Tell us about the inspiration behind your new collection, _and carry on. How did you come to the 1941 wartime garment industry as a point of inspiration?

To provide a bit of context, I'm really fascinated by what I like to call aftermath industries, which are kind of these moments throughout history and subculture where people have been forced to create or to design after some sort of a societal collapse. I think that they're really fascinating to me because there's some really interesting sustainability techniques that I think can be extracted from those moments.

I also am really visually inspired by creativity under constraint: mending and making do, DIY, very utilitarian techniques. As I was trying to craft my pieces, I was thinking about how I could really apply all of that interest. My research took me into WWII, and I was looking at apocalypses throughout time, whether they're imagined or real, and it brought me into this wartime moment.

I was really fascinated by this duality between destruction and rehabilitation, and I was blown away by some of the visual imagery of war-torn architecture, crumbling infrastructure and industrial debris, and bomb sites. But I was also really in love with this idea of people finding other ways to create and to make under all of this pressure. That's when I discovered this CC41, which is Controlled Commodity fashion — a rations scheme that was introduced by the British government in response to labor and garment shortages during the war. I wanted to really find a way to speak to this duality between man's ability to create and destroy.

How did the metal factor into the concept? There's great accessories in the mix, but when used in the garments, it seems to contribute to the deconstructed, disconnected feel many of them have.

Metal to me was this thing that brought those two worlds together of creation and destruction. I'm seeing these torn metal, bent metal architectures, then I'm also thinking about how metal was being removed from garments and reallocated to the warfront. People were not using hardware anymore; they were reallocating buttons, and all the metal that was typically in garments and furniture, all of it was going toward the warfront. As I was starting to experiment, I was looking at all of these different ways that I could create a collection that was visually inspired by this catastrophe and warfare but was really structurally considered using some of those techniques. So the collection is visually inspired by collapsed architecture, things being dismantled and falling apart, but the way that I chose to make the collection is referential to that industrial renovation that was taking place.

Another component that was really important to me waste in my hometown. I'm from the Midwest; I'm from Milwaukee, Wisconsin. At the time [of WWII], it was really well known for being the "machine shop to the world." They provided a lot of steel and metal to the warfront. I got to collaborate with some local, hometown artisans to revisit that craft, and we welded and bent all of these steel features that I got to sew with later. That was a lot of fun.

I was wondering about where you sourced some of that metal and other textiles. I know you took an intentionally sustainable approach in creating this line.

Totally. All of the materials are authentic to the WWII time period, so a lot of the materials are from 1933 to 1945. And those were gotten from dealerships online, salvos, and old war shops, and I kind of cut them apart. I found parachutes, repurposed canvas bags. So there is that element of authenticity in the collection, and all of the materials involved are also specific to the regulations of the time. They only worked with specific materials and textiles, so I tried to not only adhere to the fabrication, but also the techniques that they would have used ,including cutting. They had all of these different rules on how long skirts could be, stuff like that, so it's all kind of referential to that time period. And the metal is scrap steel from Milwaukee, so there is that kind of authentic moment happening there too, which is something I was really intrigued by.

I'm also really interested in Machine Shop, the short film that features the line. I know you created that in collaboration with a lot of Milwaukee artists. Can you tell us about the idea behind that?

I really wanted to make a fashion film at first, and I was going to go home over break and just make this fashion film. But then I started to compile a casting list and a call sheet and I was realizing how many amazing multidisciplinary artists that I had in my own community in Milwaukee, and then I was like, you know what? I want to turn this less into a fashion film and more into a film that is inspired a bit more by the inspiration of the collection, but isn't strictly fashion.

So the film is divided into all these vignettes that have to do with architecture and warfare and femininity, and they're all kind of placed in iconic places around [the city]. Milwaukee is very industrial and blue collar, and I got to find all of these warehouse spaces and cold storage units, and places that would have been contributing something around the time of [WWII]. It was this amazing opportunity to get to collaborate with people from my community and get to create something cool that had to do with the collection, but wasn't specifically tied to the collection. I wanted to find a way that we could all contribute something unique to it, so we had choreographers, spoken word artists, the whole deal. It was a lot of fun.

Milwaukee is incredible, and nobody knows. It's this tiny, little underground space right now, and there's such an amazing culture of artists and musicians, and everyone's just so excited and willing to collaborate and contribute to a project just for the love of it. I don't think that I ever could have completed a project like that in New York. There's just a community that is so engaged and involved and supporting each other's work, and it's just a really welcoming space. Milwaukee doesn't really have a very thriving fashion community, obviously, but people are really doing what they can to make stuff that they love for them, by them. It's really this really amazing space; there's something really interesting going on there right now.

So the people you worked with on Machine Shop are part of that community, yeah?

Absolutely, definitely. And that was just one project, and I had such overwhelming support. I'd love to go back and continue to work and create creative opportunities in Milwaukee, because that's something that's so important to me.

I'm in New York at the moment, but I'd really love to be kind of between Milwaukee and New York. You know, the thing that I hate the most is when people have all these incredible opportunities and these experiences, and then they leave their hometowns and they go to New York or L.A., or they go someplace where they're not really contributing that much to the creative community. I think that there's so much room for opportunity in the Midwest, and I really want to kind of bring what I've learned back and share it and help create a scene someplace where it's a little bit more valued, I think.