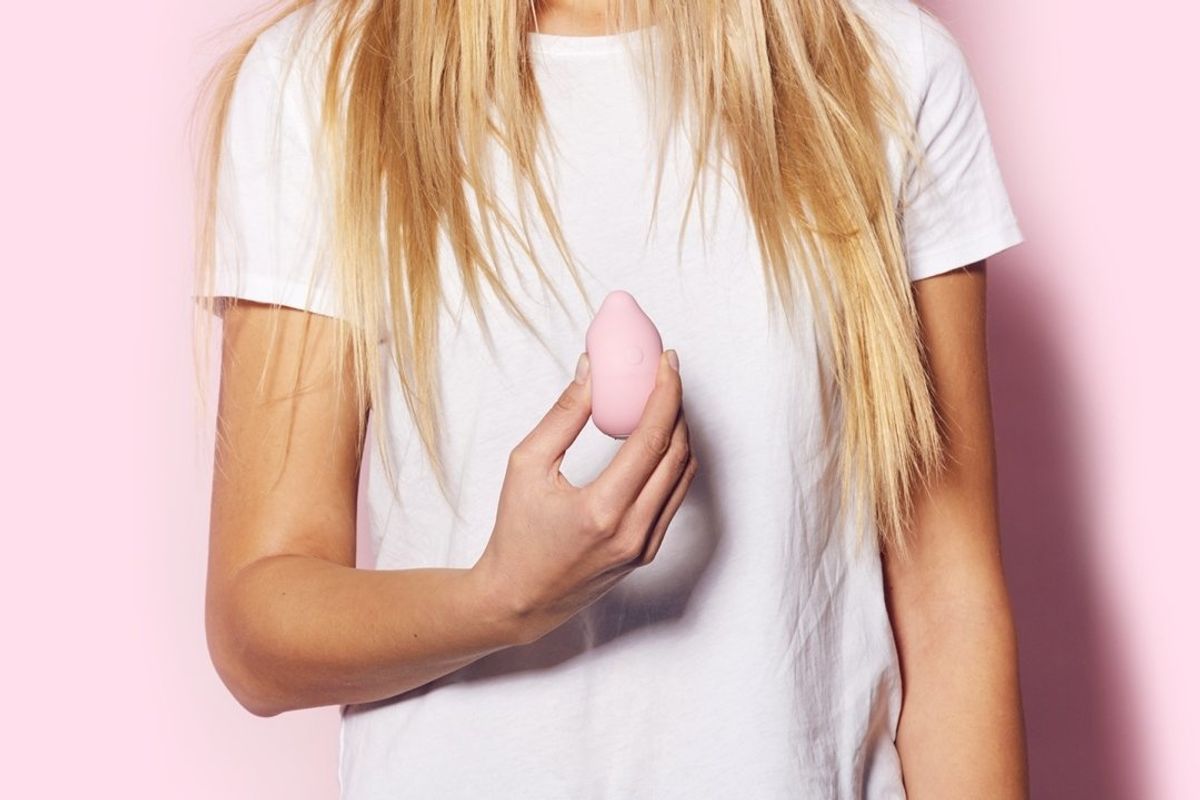 The Women Empowering Others To Put Pleasure In Their Own Hands

I wouldn't have gotten through such a crazy, tumultuous year without Fin. As someone who has been riding the course of what feels like an endless dry spell, this vibrator has made me feel more confident and less embarrassed about my inactivity. When someone doesn't get the hint to come over, I don't get worked up because I can just hit the sheets and play with Fin. This is all thanks to Dame, the world's most crowdfunded sex toy company. CEO and co-founder Alex Fine has always had an interest in sexuality starting from age six when she accidentally went to a drag queen party with her "cool" aunt. From there, she went on to earn a masters in Clinical Psychology from Columbia University to become a sex therapist in 2011, but the "capitalist hippie" within her wanted more.

"The way people feel about gender equality isn't necessarily the same way they feel about sexual liberation. In some ways, it's a lot easier for people to get out there and fight for equal pay 'cause we live in a capitalist society, talking about money is sometimes a little bit easier than talking about sex or demanding that in public," she says. "There's something about the taboo of sexuality that I think is so personal in a way that I understand it is about intimacy which is a vulnerable thing that we do with each other. There's a reason we don't just do it with anybody. You don't let anybody in your home... From that I think a lot of old things like making babies, which is part of having sex, all of these things have created a social foundation for how we understand sexuality that's wrapped in secrecy and shame and inappropriateness."

"We're looking to really create more content, events and products that are for couples," she explains. "It's like, 'What can we do to get men and women to talk to each other better? How can we get people to understand what intimacy really can look like?' We're trying to make these tools that improve sexual pleasure, intimacy and love, and there's clearly a lot outside of physical tools that we can maybe do to help give understanding[and] awareness to the world."

Another women-owned and operated brand that has been erasing the stigma surrounding sex toys is Unbound. The company was spearheaded by founder Polly Rodriguez who developed an interest in sexual health after being diagnosed with cancer. As she underwent radiation treatment, she noticed that her body was going through significant changes, but for some reason her doctors omitted the effects she would experience because it was an uncomfortable conversation.

"The fact that I was going through menopause and it wasn't addressed, and the only thing that I was told was that I would never have children," she says. "It both angered me and sparked a sense of curiosity as to why no one talked to me about it and why, I guess, my doctors felt uncomfortable or that it didn't matter.

Related | Can You Really Cure a 'Depressed' Vagina?

From there, the brand evolved into an online e-commerce shop stocked with inventory and even a magazine with educational content. This past December, Unbound introduced its own line of vibrators, lubricants, arousal gels and condoms. For Rodriguez, the most important factor is creating affordable and accessible products for everyone because sexuality shouldn't be viewed as a privilege--it's a right that should be democratized.

Leading up to Valentine's Day, Unbound launched the Give A F*ck campaign as a call-to-action for people to engage in open conversations with their loved ones about "self-love and enjoying our bodies" in the wake of the #MeToo movement and the outpour of sexual harassment stories.

"The Give A F*ck campaign was kind of born out of the belief that sometimes the best form of self-love is that that comes from encouragement of those in your life, be it a partner, a friend, a sister," she says. "A third of all customers that shopped with us were actually gifting the product either to their significant other or to a friend as a gift. We thought, why don't we take the data, turn it into a campaign and encourage people to share with each other that it's not that they need a vibrator, but that they deserve one?"

She adds, "It's just that in a time in which I think there's so much sadness, and harrowing stories around sexual harassment, for us it's been a nice glimmer of hope to see all of these people who are choosing to embrace sexuality with those that they love and encourage them to just enjoy their bodies."

Rodriguez is also the founder of Women Of Sex Tech, an inclusive community of women entrepreneurs in the sex tech space that share a common goal of femme identifying individuals enjoying their sexuality. She believes that there are still taboos around sex toys because of the "institutional barriers that exemplify our fear as a culture" around sex and sexuality.

"I have philosophical beliefs around sexuality being a mechanism that's been used systemically to keep women and non-cis male individuals that are marginalized down," she says. "The other side of me just believes that we're as humans generally uncomfortable with being vulnerable and sexuality requires us to be really vulnerable and that's not easy. I think because we don't have open conversations about it, it kind of perpetuates the cycle of not talking about it, and feeling like it's taboo. When we don't share with one another our personal experiences, it becomes this thing that we're not supposed to talk about and denormalized.

Despite their mutual mission to empower women, femmes and their partners to practice safe and enjoyable sex, Unbound and Dame both struggle to get approval to run advertisements for their products on Facebook. "Compared to guns, or drugs, we are lumped with all these other things that I can explain why they'd be harmful for society," says Fine. "I can't fathom the argument why vibrators are harmful to society, yet we've decided they're inappropriate."

However, that obstacle alone isn't stopping either company from carrying on with their mission to empower women, femmes and their partners to practice safe and enjoyable sex. There are even bigger hurdles to overcome like the Trump Administration and its war on the female body and a woman's right to decide what she wants to do with it.

"For all of the terrible realities of Donald Trump being president that we have to live in, one of the silver linings has been the fact that it's become this thing that has enraged women to the point where they're like, 'You know what, I'm not going to let this person dictate what female sexuality looks [or] feels like… I'm going to find it for myself,'" says Rodriguez. "I think it's been magical for the past year and a half."