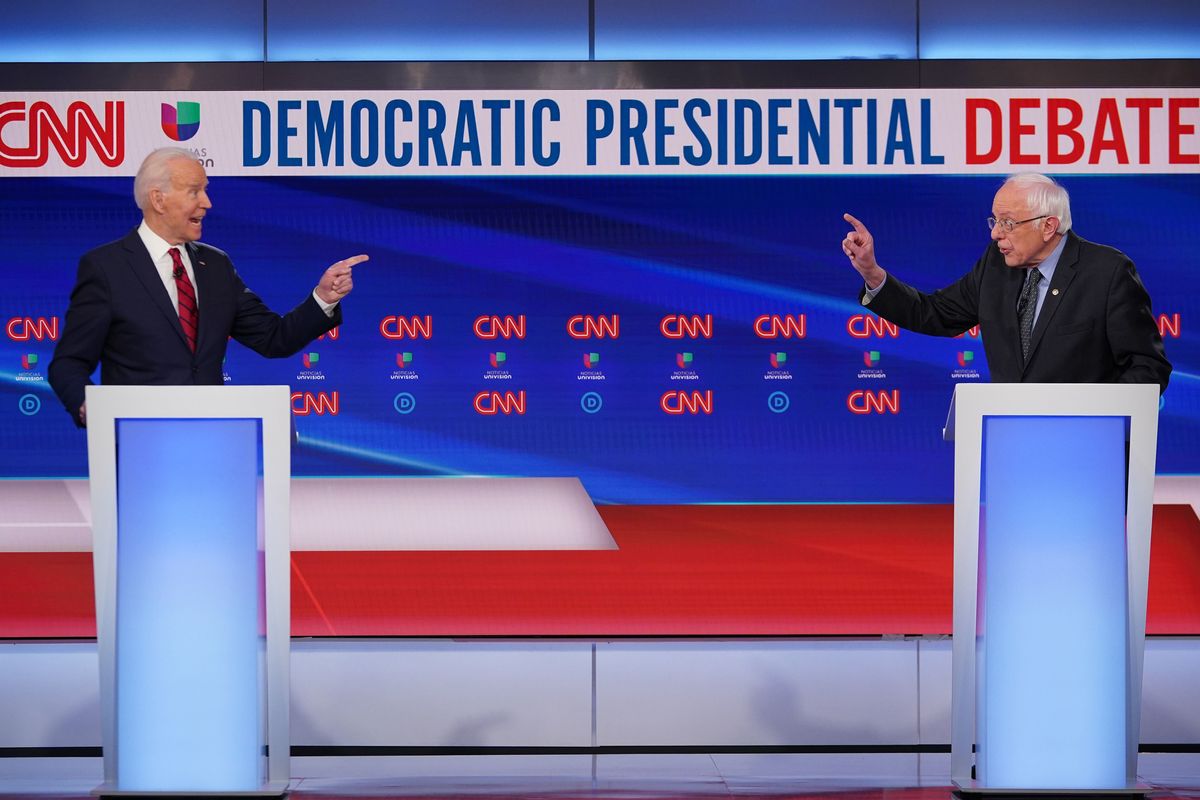 For the past several weeks, every single one of our three to four remaining brain cells has been working overtime to try to fathom the unintelligible reality of the coronavirus pandemic. We're keeping track of the day-to-day protocol changes in our communities, death tolls and infection rates; which cities are under lockdown and which friends have been laid off. It's easy to feel like the presidential race is just bad reality TV where no one's even fun or hot, or simply too overwhelming to keep up with on top of everything else.

However, the current crisis has everything to do with the White House. And it's more important than ever to plug in. The severity of the pandemic and how we recover from it will be decided by one of the guys on the ballot. As will the scale of reforms we make to our precarious healthcare system and social security net, which made COVID-19 more dangerous than it had to be, whether for patients facing huge hospital bills, undocumented or uninsured people afraid to seek care in the first place, gig economy workers out of the job, or those being laid off across sectors.

We know you're too stressed and/or depressed to Google it, so we put together a quick cheat sheet to what's going on with the election right now.

C'mon, you know this one. Joe Biden and Bernie Sanders became the last two candidates standing after Tulsi Gabbard suspended her campaign last Thursday. It's functionally been a two-candidate race since Super Tuesday, when Elizabeth Warren, Michael Bloomberg, Pete Buttigieg and Amy Klobuchar suspended their campaigns.

Since Biden's big win in South Carolina, he's pushed into a decisive lead with 1,147 delegates to Sanders' 861. A candidate needs 1,992 to win the nomination. The former vice president went three-for-three in Illinois, Florida and Arizona during last Tuesday's round of primaries. However, there's 26 contests left and a lot of uncertainty about logistics and voter sentiment in the wake of the virus. A comeback of this scale would be rare — the race isn't as tight as either the 2016 or 208 Democratic primaries. But by the numbers Sanders can technically still win. He'd have to secure around 63% of the remaining delegates to beat Biden, including big wins in Pennsylvania and New York.

Related | Every Celebrity Endorsement in the 2020 Primary

Is Sanders going to drop out?

Although Sanders says he's "assessing" his campaign, his representatives are shooting down rumors of him dropping out and say he'll participate in the next debate. His campaign has moved their massive organizing operation online, announced plans for New York and Pennsylvania and Senator is still holding virtual rallies, fundraising events and daily briefings.

As the New York Times observes, Sanders has more or less turned his campaign into "a pandemic policy shop and vessel for progressive activism," focusing on the crisis in speeches and using his fundraising operation to benefit COVID-19 relief projects. While moderates fear Sanders remaining in the race will damage Democrats chances in the general, his supporters are committed to keeping him in the race to drive turnout for downticket races (voters are less likely to come out for uncontested races) and to pressure Biden adopt progressive policy commitments.

"Bernie is not running a campaign so much as leading a movement," Winston Apple, a Missouri who supports Mr. Sanders tells the Times. "He will be a more effective leader for our movement if he remains in contention throughout the process."

Has anyone picked a VP yet?

Neither candidate has announced a running mate. Biden pledged at the last debate that his VP will be a woman. CNBC reports that Senators Kamala Harris, Amy Klobuchar and Catherine Cortez Masto, Michigan Governor Gretchen Whitmer; and Florida Representative Val Demings are all possibilities.

There's less intel on Sanders' side. Many progressives have dreamt of a Sanders-Warren ticket, and two weeks ago, his campaign co-chair Ro Khanna called Elizabeth Warren an "outstanding choice for VP." Warren's decision not to endorse any candidate makes that option look less likely. Names being thrown around also include his campaign co-chairs, Khanna or Nina Turner, and progressive Wisconsin Senator Tammy Baldwin.

Which primaries are postponed? Will they still count?

Louisiana and Kentucky have both rescheduled for after June 9: the Democratic National Committee's deadline for delegate selection. The DNC said in a statement, according to the New York Times, that it would "continue to work with every state party as they adjust their delegate selection plans around coronavirus," but warns that moving primaries past June 9 could result in states "losing at least half of [their] delegates."

Will the Democratic National Convention be postponed?

Right now, the DNC plans to move forward with its convention set for July 13-16, however it has said it's assessing "contingency options."

Will the primaries switch to mail-in voting because of social distancing?

Neither the federal government nor the Democratic Party has taken steps towards a mandatory mail-in voting policy, although conducting an election when people are afraid to go to the polls has already resulted in chaos, voter suppression and violation of the White House's ban on gatherings of ten or more.

Early and mail-in voting salvaged turn-out in Florida and Arizona (Illinois took a hit), but in all three states some polling places failed to open because workers didn't show up, and others were relocated at the last minute from sites like nursing homes, shortening hours and confusing voters, according to a report by the Los Angeles Times. Some are cautioning against the complications of voting by mail, while others are calling the results of "coronavirus primaries" illegitimate.

The three upcoming states to hold primaries — Wyoming, Hawaii Alaska — have all canceled in-person voting, extending mail-in ballot deadlines and offering for voters to pick up and drop off their ballots individually. Election officials in states like Virginia are urging their Democratic parties to do the same. Others are advocating at the national level.

"In light of the threats that this virus poses, every American should be able to cast a ballot by mail without excuse," Klobuchar and Senator Chris Coons of Delaware, wrote Friday, urging Congress to fund mail-in elections in the COVID-29 emergency packages. "That means states will have to scale their vote-by-mail processes in a way that hasn't been done before."

When are the next primaries?

Alaska, Hawaii and Wyoming will vote on Saturday, April 4, all three by mail. They'll be followed by Wisconsin on Tuesday, April 7, where the governor has not yet cancelled in-person voting but encourages people to vote by mail. (Sanders won all four states in 2016). Puerto Rico is next on Sunday, April 26. April 28 was originally supposed to be the last major primary day with delegate-heavy New York and Pennsylvania. Now, only New York and Delaware will cast votes on the 28th, while Pennsylvania has re-scheduled for June 2, which gearing up to be a bonus "super Tuesday."

Does Joe Biden have coronavirus?

In addition to the ban on gatherings over 10, at ages 78 and 77, Sanders and Biden are both in high risk categories for the virus, so COVID-19 means both candidates have suspended in-person campaigning. But after the last Democratic debate, many felt "Joe Biden disappeared," only surfacing last week for a call with the press while Sanders held frequent briefings, roundtables with lawmakers and live speeches on Instagram. On Monday, Biden held a fifteen minute speech from his home in Wilmington, Delaware criticizing Trump's response to coronavirus.

Rumors his absence is due to illness appear false. In an interview yesterday with CNN's Jake Tapper, Biden said he hasn't been tested for COVID-19, but has experienced no symptoms. The Biden campaign, according to The Hill, says the candidate will ramp up public appearances this week, both in broadcasts from his home and on TV.

Could the general election be postponed or cancelled?

While conspiracy theories are flying, thankfully, Trump using COVID-19 to avoid going on the ballot in November would be nearly impossible. While states set the dates of their own primaries, the Constitution mandates that the new president's term must begin on January 20, and the new congress' on January 3. Trump could not use an executive order: changing the constitution would take new legislation passed by Congress, signed by the president and subject to challenge in the courts.

A presidential election has never been postponed before, although state and local elections have been. The 9/11 terrorist attacks postponed municipal primary elections two weeks in New York City in 2001. In Florida, in 2017, Hurricane Irma also pushed back municipal elections.

Could the general election be vote-by-mail?

We don't know what the country will look like by November, but we know it's going to be a long time before the way we interact in public goes back to "normal." While the date of the general election is set federally, states determine their own voting procedures, which is why voting is so inconsistent, confusing and complicated.

States could individually opt for mail-in voting in November, if social distancing is still in effect. Some states like Washington and Colorado already conduct their elections mostly by mail. This process would be eased with federal guidelines and funding. According to voting rights experts, this is the way to go. In an op-ed titled "Voting by Mail Will Save the 2020 Election" Dale Ho, director of the Voting Rights Project at the A.C.L.U., laid out a four-step plan for protecting the general election that includes ramping up education on how to vote by mail, broadening access to vote by mail, permitting early processing of absentee ballots, and protecting the rights of absentee voters.

"There is not much time left before November," writes Ho. "But these simple fixes could mitigate disruptions to our democracy caused by the coronavirus pandemic, and help ensure that every American can participate in November."

Find out how to register to vote in your state here.