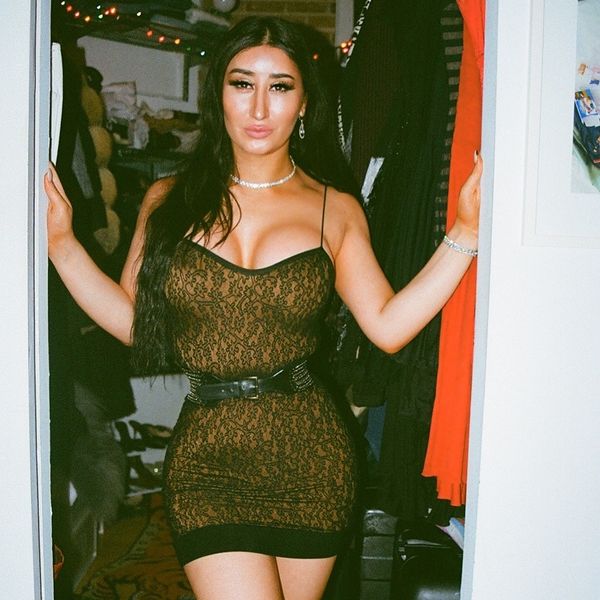 Popularity is relative, and especially in the digital age. You could have hundreds of thousands of followers online, but be completely unknown in the streets — massively famous on Instagram, YouTube or Twitter, but lack any kind of real, authentic cool in person. For our new series, Coolest Person in the Room, New York-based photographer Megan Walschlager pinpoints all the people whose energy is contagious regardless of their following count or celebrity. Meet Natalie Tauger — the NYC-based fashion consultant and Alaïa enthusiast you need to know.

Tell me about your day job.

Who are some of your clients?

I split my time a lot with Zara and Ports, which is a brand we've been working on their relaunch together. I used to do a lot of work for Tommy Hilfiger and Interview when we worked there.

How did you get into this?

I always loved fashion and became obsessed with magazines, so I started studying credits and who was doing what and learning all the names and then I started interning. I met Karl through an internship at Interview. Then Karl left Interview and his assistants at the time asked me to come and work for him and I did. It's been really organic growth and the education I've had from doing all this has been equal to if not greater than the formal education I had growing up.

Have you had a pinch me moment in your career?

I'm super proud of the last Ports show we worked on. I think those pinch me moments don't really happen until you're reflecting months later or even years later when you can have that out of body experience and be like, "That was so amazing!" I did a show for Tommy Hilfiger in Shanghai and that was a bit of a pinch me moment because it was right on The Bund in Shanghai and it was all these modern supermodels like Joan and Hailey and Winnie. To do something that big on that scale was really exciting. And I felt really grateful to work with brands that really went for it and pushed it and had conviction in their ideas.

Obviously I'm really obsessed with instagram just like everyone else. I think I'm really obsessed with glamour and what that means. I've felt more drawn to that lately when I start to think about the currents in fashion and what I really like and what I really respond to. I think the way that I dress and the way I present myself is very different than the work I do and sometimes I feel like it would be very interesting to do work that was more in the vein of what I do for myself. And I don't know of many of my contemporaries or people out there that love to do glamorous fashion in a way that I feel like I can.

What do you think you spend the most money on categorically?

I spend the most money on food. I go out almost every night to eat. Food sneaks up on you because it's kind of a necessity, whereas it's easier to be like, "I don't know if I should spend $500 on that dress," or whatever. But then you could spend $500 on food in a few days and not even notice.

I was born in Bensonhurst, Brooklyn in the same hospital my mom was born in — she was very sentimental about that. We lived in Battery Park City 'til I was five and then New Jersey 'til I was 17 and then I came back to the City for college and just stayed ever since.

Are you currently reading anything?

I read like a million articles every day. I feel like I'm more of an article reader, but when it comes to books—

They do, but let's be real. They kind of don't. When it comes to books, I just feel like my attention span is not there because I always feel like I need to be doing other things. Like I can read a book on vacation or sometimes on an airplane, but I'm not an open-a-book-before-bed type of bitch.

I love to go out. I wouldn't say I'm like a nightlife person in that way. I really enjoy it though. The thing is I always feel like in my personal life I like to be in the passenger seat because I make so many decisions at work all the time. If someone is like, "Come here, do this!" I'm totally down to clown, but I'm not someone that's chasing it. I like to be chased.

"I'm totally down to clown, but I'm not someone that's chasing it.

​What was the last concert you went to?

I think it was On the Run with Beyoncé and Jay Z.

What was the first CD you ever had?

It was Alanis Morsette's Jagged Little Pill. We played it in the car and I had never heard "You Oughta Know" off the radio and she says the "f-word" in it and I remember I started crying because I thought that was such a naughty thing. I had a similar experience with my sister when I bought J.Lo's first CD. I think the song's called "Play" where she's like "Play my mother-fucking song" and my sister and I both started crying [laughs]. We weren't even raised in a super-religious way, but just to hear somebody we really looked up to curse in that way when we were so young was really polarizing for us.

I really like the Dua Lipa song, "Don't Start Now." I watched Love Actually the other night and Justin Timberlake's first single "Like I Love You" came on and I was like, "Wow, this is such a bop." Like if this came out today, it would be such a hit.

What's your getting ready routine?

I'm either doing skincare or I'm doing a full beat. I don't know how to do that perfect in-between: first date, look-like-I'm-not-trying-too-hard type of makeup. Either it's nothing or everything. My ritual is that I always have to play music. It's funny if you were to ask anyone I work with they would say that I hate music because I really don't like to listen to music when I'm thinking. But when I'm getting ready I need it to sort of amp me up. I definitely don't drink or anything when I'm getting ready. I need to focus.

To do it properly I really like to have three to four hours. And it's not because I'm putting sequins all over my face, I just really like to pace it out and I prefer the ritual of getting ready to going out. When my friends come over to get ready I always have the best memories of us walking in and out of the bathroom in half-makeup, talking shit. And then when you go out you're kind of just like, "I looked better before I went out."

Also, you can't control the elements, whereas in your habitat you can control the elements. Like you know which light to look at if you want to feel your oats. Sometimes I get home from a night out and I'm looking all types of whack and I'm like, "You know what? I bet I just started looking like this five seconds ago. It had to have just happened that my hair fell into this part."

I know exactly how you feel but I always think you look stunning!

The one thing that I like to think about myself is that for being a fashion girl, I am really into the gym and I am quite physical and I felt like that was something that was always considered a faux-pas. Like, to be so out there about my body and be so proud of my physicality. I think we were coming from a place in fashion that people maybe assumed that I dress for men rather than myself. And coming from a place of women being more covered up with Celine and all these brands inspired by menswear. I'm proud of the way I've embraced my figure rather than worked against it.

If you could only indulge in one beauty element what would you choose?

Personally I really feel lashes are transformative. Or a spray tan. The other day I was working with a client I have known for many years and she was like, "Oh my god, you look so tired!" And I was like, "No, bitch. I just don't have lashes on right now and I don't have a spray tan. This is just what I look like. I'm actually totally rested."

"I want a drink that a bad mom would give a child to make them fall asleep."

Do you do your own spray tan or do you go to the professionals?

I go to the professionals — I can't do that shit myself. I can't even glue on a strip of lashes. I need to get the extensions. For special occasions, like if it's my birthday or there's a party that I'm really looking forward to, then I'll get someone to do the strip for me on top of the extensions. I never don't have the extensions.

What is your favorite thing to wear?

Alaïa or nothing at all.

I really don't know that much about alcohol. I always say I want a drink that a bad mom would give a child to make them fall asleep. I like something really sweet.

Yes, yes, yes. I don't have one drink. I would probably like a cosmo but I don't really know what's in that. There's this drink at Sel Rrose on Delancey that I love that's like a vodka pink lemonade.

I really like going uptown. I think that's really fun and glamorous. Especially as someone who spends so much time downtown — there's something that feels really fun and exotic about going up there. It always feels like living a fantasy of not my real life. I don't have a particular haunt or something. But my therapist is on the Upper West Side and sometimes afterwards I'll just walk around and explore. I also really love Times Square.

What do you love about Times Square?

I just really love that people work their whole lives to come see it and for me it's right in my backyard. I think it gets a really bad rap when it has this fabulous history. And it's the convergence of so many things that for me are quintessentially New York, and one of them is tourists.

I'm a Virgo and a Scorpio rising. I feel like a quintessential Virgo. People that don't even know me that well have stopped me in my tracks to ask if I'm a Virgo.

"People are more involved and more aware than ever before.

It's really cool to care."

What are your predictions for 2020?

I think culturally a lot of that depends on the election because I think that changes the mood. People are more involved and more aware than ever before. It's really cool to care and I think before people associated cool with indifference, but now I associate indifference with privilege which is not cool at all.

It's not a prediction, but I have a hope that people will continue to be true to themselves. I think that's the really exciting gift of social media. Everyone gets a platform and a brand that exists outside of their physical being. They get to create the world that they want to be in.

What is next for you?