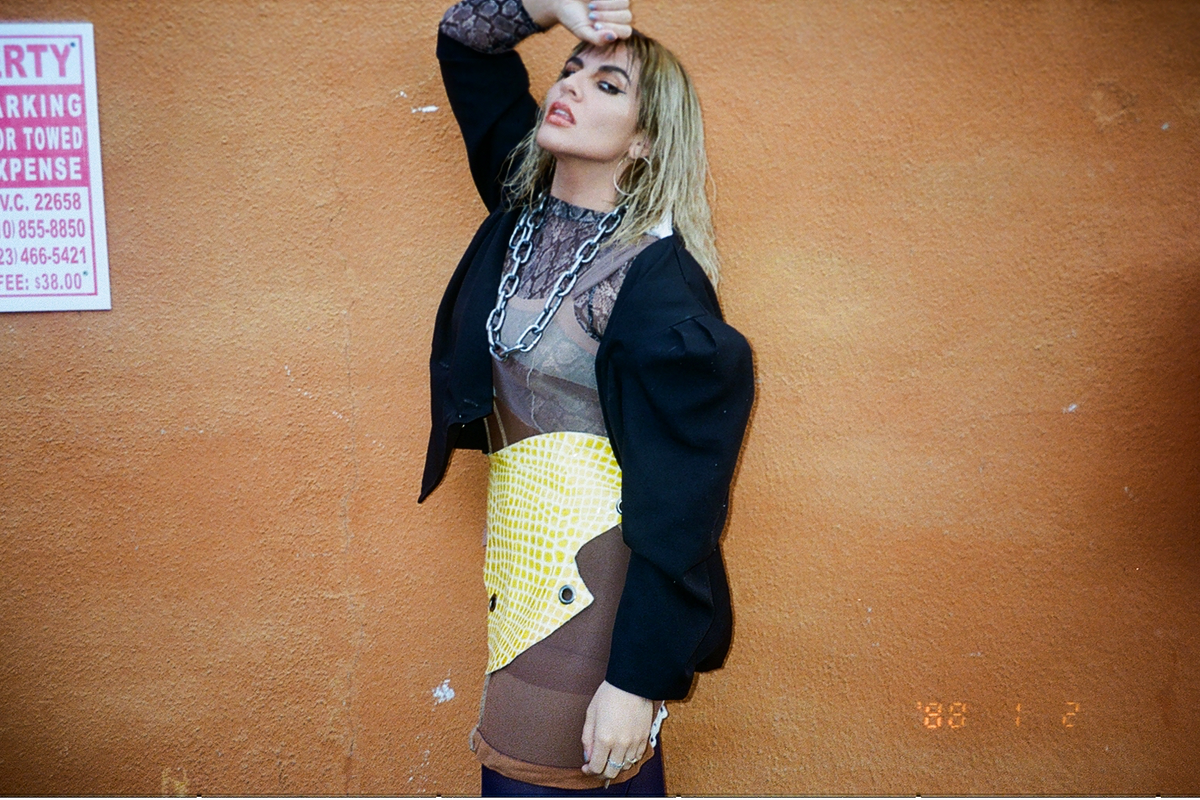 Popularity is relative, and especially in the digital age. You could have hundreds of thousands of followers online, but be completely unknown in the streets — massively famous on Instagram, YouTube or Twitter, but lack any kind of real, authentic cool in person. For our new series, Coolest Person in the Room, New York-based photographer Megan Walschlager pinpoints all the people whose energy is contagious regardless of their following count or celebrity. Get to know LA native Gianna Gianna — a trained opera singer, dancer, rapper, filmmaker, writer and all around artist — that strives to document authenticity beyond a singular medium. She's already your favorite artist's favorite artist. She's also a preschool teacher.

What is your day job?

Yeah, just because this one lady was like, "You should be a teacher." I'd always taught dance, because I'm a trained dancer first, but more like after school program-esque for a steady paycheck type of deal. But I had never been a teacher teacher. So then she paid for my school.

That is sooo crazy.

It's insane. So I taught dance classes to get a normal paycheck while I was in college, and once I got my degree, she was like, "Ok, now you're a teacher." First I taught third grade, and then I was the art director of a school for a long time. I missed working with little kids though, because I got to create a curriculum from scratch and feature my brother Jesse [Saint John] and other local artists. But mostly, I made them study like Dadaism and Oskar Schlemmer.

What! Not these lit ass preschoolers.

Yes! Well, that curriculum was for like fifth and sixth graders, but I missed working with babies. Now I am the lead teacher of a 2-year-old class.

How long have you been a teacher then?

Like 5 years. It's been so inspiring and so cool because a lot of people are always surprised when they ask me what I do during the day, and I tell them I'm a teacher and they're like, "I dont get it?" But actually, kids are the most inspiring and so connected to their true artist selves.

I'm trying to unlearn all this stupid societal stuff — well, I'm not going to go on that rant right now but, kids do whatever the hell they want. If they are angry, they'll scream and if they want to poop their pants for attention, they'll do it! And I think it's cool and I wish I could be more like that.

Tell me more about your life as an artist.

I've been in a band called BLOK since I was 17 with my brothers Damian Blaise and Jesse Saint John. We were born in LA then moved to Orange County because of a better school system or whatever, but then we got big in the OC scene. We made really aggressive, electronic rap.

Then we got nominated and won — for 5 years in a row — the OC Music Awards and that was a huge deal. We met Gwen Stefani and No Doubt, Snoop Dogg and Sugar Ray. Then Die Antwoord asked us to play with them — and that rap group Clipse — and so many other people.

I remember when I met your mom at that hotel when Jesse was performing she was like, "They had a band and Gwen Stefani was obsessed with them!"

Right. Through that, videos of me were posted online and Peaches reached out and had me dance for her a bunch and play for her solo.

And that was another thing, so BLOK was still going on — and that was rap — but I'm a trained opera singer, so I wanted to do some more singing/darker stuff, so I had my solo project on the side. Also because Damian owns his own VR company called Beyond Matter so he's busy, and Jesse is a songwriter for, like, everyone, so he's busy.

So, I had my own solo project, and just through posting videos online like Debbie Harry reached out to me to be in her video and Margaret Cho asked me to be in a video where I make out with her. And David LaChapelle saw a video of me and cast me to dance in his Coca Cola commercial.

Yeah, the Internet is so sick. Also from the OC Music Awards, I was represented by Disney for a long time — like they wanted to make me a Hollywood Records Taylor Swift girl, and i was like that ain't the deal and it's not who I am, but I will reap the benefits. Like I still get into Disney World for free.

Yes, I do so many things. That's my whole thing: documentation of vulnerability and action without compromise. I wanna be myself all the time. I feel like everyone has so many layers and everyone is so capable of everything, that just pursuing one avenue isn't enough for people to express their whole multidimensional selves. So, that's why I do film, and dancing, and singing, and teaching, and writing.

I feel that — I always get caught up because nothing I want to do is in a linear path, per se.

It's such a scam. You should do all of them and if people don't get it that's their problem. Just do whatever it is you want to do, and then you'll just have these iconic people reach out to you like, "You're doing something, but what is it..." And it's like, "I'm just being myself!"

People listen to multiple genres of music. If you don't limit your playlist, why would you limit what you are doing? It doesn't make sense. That's why I'm like 80% great at everything — because I can't focus on one thing that long. So, that's my whole thing. Just do it all because, why not?

Great point. Do you have any getting ready rituals before a performance?

I don't. I try to be as organic and in the moment as possible so I don't even listen to my own songs before. Or I'll make a song and that'll be it — and if I mess up or whatever that's good because it should just be, like, yourself organically on stage. I think people gravitate towards that anyway.

What's the greatest thing to happen to you after hours?

I guess after shows when people will come up to you and be like, "That was so inspiring!" Sometimes they'll repeat back to me stuff I did on stage, and I can't remember any of what I did on stage because it's so in the moment. One time I literally jumped off this 5 foot stage, like, into the splits and I don't remember it happening — like someone literally showed me a video of it. I can't even do the splits, it was all adrenaline.

Favorite drink at the club?

I don't drink and I don't smoke and I never have. But I usually have a Red Bull on the rocks. Caffeine is my drug of choice.

Favorite spot in the club?

Where do you like to go out in LA?

I really love Nous Tous Gallery because they always have live performance art pieces, which I think is sick.

I'm hosting a party called Club Clit on January 20th at The Slipper Clutch and I'm hosting Sex Cells at the Echoplex on February 15th.