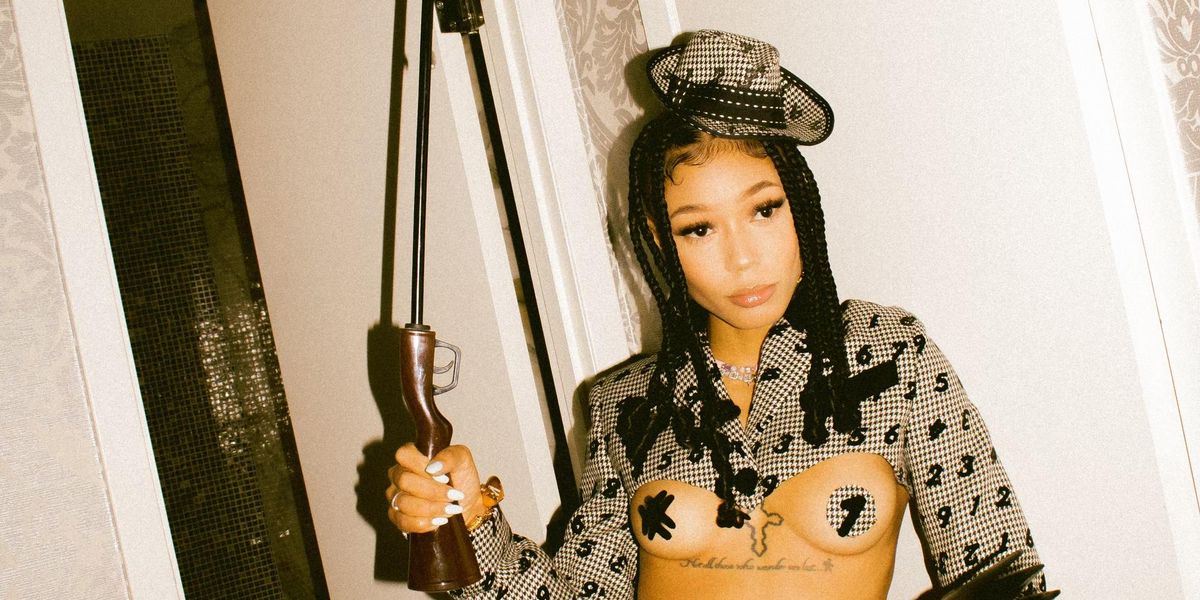 Coi Leray made her New York Fashion week debut this season, arriving to the Spring 2022 Moschino show at Bryant Park in a barely there look styled by Matthew Mazur (AKA Mazurbate). "I couldn't believe it," she tells PAPER of attending. "This was my first fashion show and just seeing everybody out there and all the colors, I thought everything was super dope."

The Jeremy Scott design for Moschino was a tailored pantsuit in houndstooth, but that's where the conventions ended (No surprise there for Scott). Leray, who's a self-proclaimed "Big Trend Setter," accessorized it with custom pasties, a gun-shaped umbrella to avoid the rain and a mini matching hat that balanced perfectly on her head.

"What I love about Moschino are the bright colors, pastels, different characters and how whimsical everything is," Leray says, getting ready for the show with an order of Popeyes. She refers to the direction under Scott as the "Care Bear effect," reminding her of a simpler, nostalgic time when the plush teddies were fixtures of childhood. "I have a care bear tattooed on me with a dollar sign, so it matches my personality."

This season's Moschino show was certainly a trip into our adolescent years, with patchwork stuffed animals and wooden alphabet blocks decorating the entire collection. Gigi Hadid even emerged holding a baby bottle in-hand, her dress patterned with colorful smiling characters. "The clothes were all about having fun," Leray says, specifically calling out Hadid's elephant-shaped sleeve as a personal favorite.

For Leray, this is only the beginning of what's to become a long love affair between her and Scott. "He's really tapped into the culture and has always been since day one," she says, highlighting his longtime collaborative friendship with Paris Hilton. "She is someone who has the same physique as me, so me and [Jeremy] is a perfect duo because I'm like the hip-hop Paris Hilton. I give that feel, you know what I'm saying?"

She teases that she and Scott have "something exciting coming up" together, only adding to a successful 2021 for the rising artist. In August, Leray dropped "Okay Yeah," following her Kodak Black and Mustard-assisted single, "At the Top," and before that, "Bout Me." And with a larger debut project in the works, it's already clear that this NYFW won't be Leray's last. "I look forward going to the next [Moschino] show," she says.