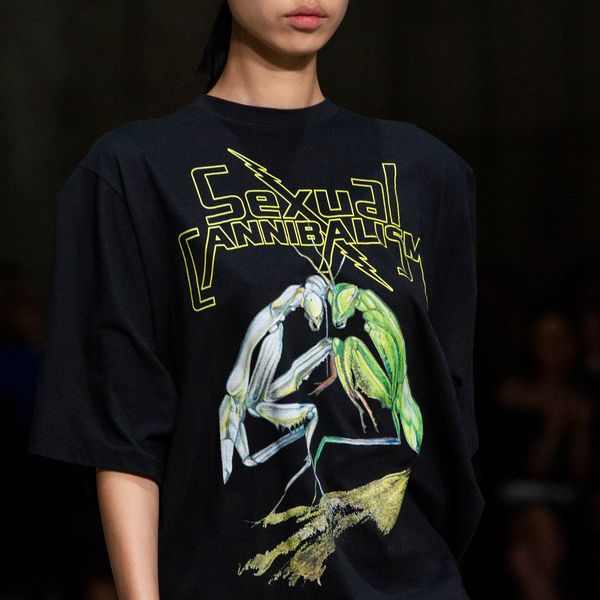 Christopher Kane has never shied away from exploring sexuality and anatomy in his collections. In 2013, the Scottish-born, London-based designer used the cross section of the Western world's most popular vaginal euphemism, the flower, as a motif that nods at female reproductive abilities. This season Kane has shifted focus to sex between insects and animals.

The words "sexual cannibalism," strewn across black t-shirts, tunics, and dresses, are accompanied by an illustration of male and female praying mantids amid a courtship dance. The phrase references the female mantis's tendency to eat her mate after copulating. Elsewhere, a print of a mare and stallion in a mating tussle is paired with the expression "horsepower," while the word "foreplay" is matched with leopards pawing at each other.

The designer brings the focus back to human physicality by playing with the c-string thong. As Diet Prada pointed out, Kane recontextualizes the undergarment as belts, collars, tops, dress straps, and the tongues of booties. While these themes are intimately connected to sexuality, Kane's playful take on them fends off overt sexiness.