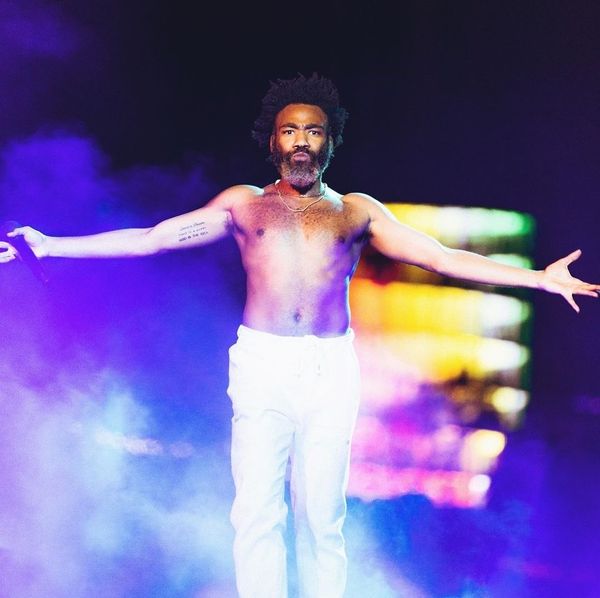 Childish Gambino's Coachella Pants Were Made in 5 Hours

Filmed in Cuba and inspired by the Brazilian movie City of God, Gambino's set carried a similarly tropical, breezy energy as his much-anticipated film. He had a full choir, rhythmic drummers, and performed the entire thing shirtless a la "This Is America." Fan favorites like "Late Night in Kauai" were included, as well as a cover of Gnarls Barkley's 2006 hit "Crazy," and Gambino reflected on his experience with death: "I lost my dad this year, we lost Nipsey, we lost Mac," he said.

Designer Christian Joy, who's created iconic Coachella looks for everyone from Karen O to Alabama Shake's Brittany Howard, was behind Gambino's simple pants. His minimal stage look was constructed in only 5 hours using materials from a nearby JOANN Fabric; the original pair she created was too stiff to move in, and Gambino's team last-minute requested an update after Coachella rehearsals.

Whether it's hand-cutting dozens of petals to create a bodysuit or using battery-operated fans from Amazon to inflate a dress, there's clearly no rule book for Coachella fashion. Below, Joy explains how Gambino's look came to fruition.

"My job is mainly to give the performer something they feel defines their performance and that they feel comfortable wearing. I always try to present looks that are graphic or colorful — something that feels joyful for both the performer and the audience. I try to keep the energy of the look upbeat, but also very defined. The look should become a part of the artist."

On Connecting With Childish Gambino:

"I connected to Childish Gambino through my friend Ibra Ake. He brought me on to create the looks for the Pharos event in Joshua Tree a few years ago. Ibra already knew my work and I think he just felt that the energy and graphic nature of it would work"

On Creating the Coachella Pants:

"The look ended up being very paired down. Originally, he and his management had asked for a look using 'anti-paparazzi' fabric, so I created a robe and trousers using material that was very bold and graphic. The pants ended up being a little difficult to move in, so they asked for a pair that were a bit more flexible because he dances a lot. We were in rehearsals in San Bernardino when I got the request so I had to run to a JOANN Fabric, buy a sewing machine and supplies and I ended up making a more simplified version of the pant in my hotel room in 5 hours. Fortunately, I had brought his pant pattern with me, so I was able to create them pretty quickly."

"The choir's look had to reflect Donald's look as well as the stage itself, so we went for choir robes and then I made sashes using the same retro reflective material I had used on his pant in similar shapes"