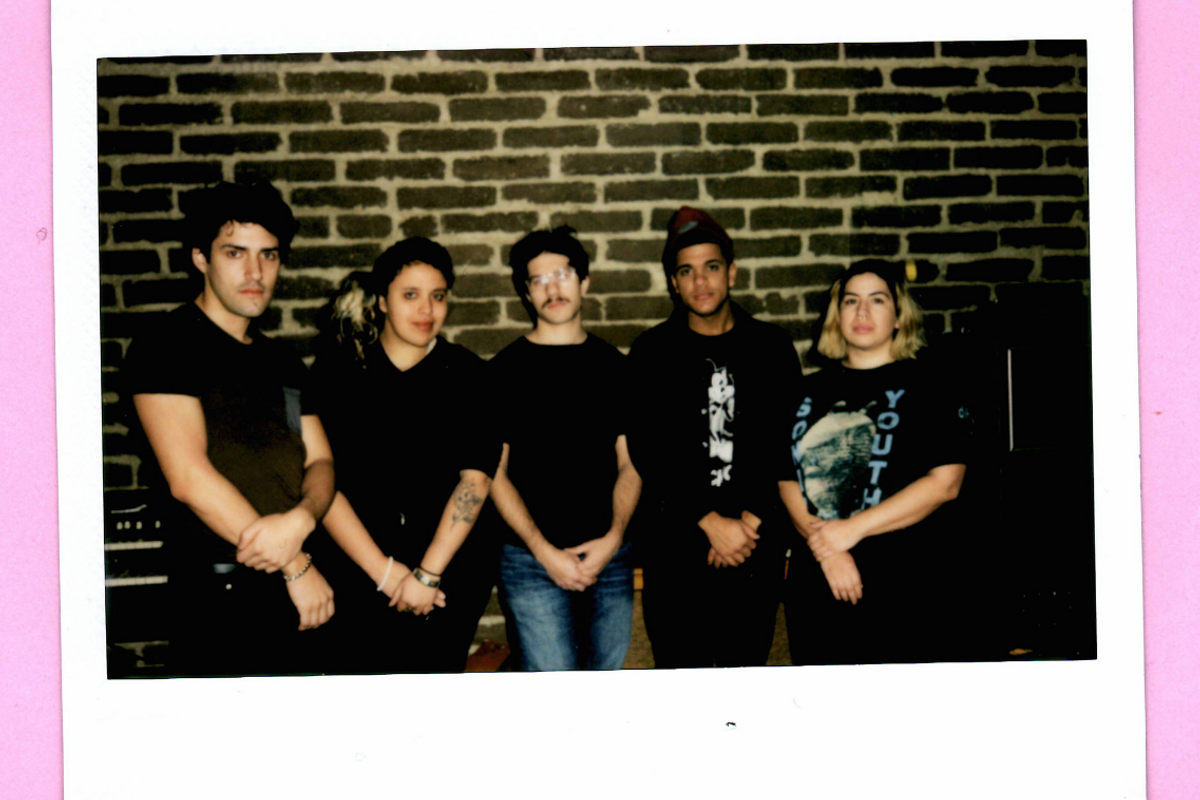 Rhode Island-native band Downtown Boys creates the kind of music that simultaneously sparks hope in politically overwhelming moments while also reminding the listener of the enormous amount of political work that must still be done. Following the release of their stellar 2015 album Full Communism, Downtown Boys just premiered a new single, Somos Chulas. Their songs serve as tools to dismantle white supremacy and fragility by acknowledging histories of oppression and by asserting the importance of their own decolonized thoughts.

We spoke about the necessity of accessible politics and of celebrating the range of joy, pain, and anger of marginalized folks feel. Their work embodies this ethos whether they're asserting, "She's brown, she's smart" or "Fuck you tall boys".

Could you tell me a bit about running Spark Magazine and using online tools to amplify your message?

Joey La Neve DeFrancesco: We started Spark Magazine with an organization called Demand Progress which was founded by the late Aaron Swartz and David Segal. Demand Progress fights for civil liberties on the web, so fighting the police state within the Internet, protecting net neutrality, as well as other campaigns. They reached out to us to make a site and run it to highlight radical artists and people who build those kinds of communities to publicize them where other sites won't or might come at [their work] from a place of less understanding.

Victoria Ruiz: We all try to maintain our friendships and relationships with people that we meet on tour, and a lot of that ends up happening because of social media. It's a love-hate relationship, but ultimately, so many people of color and so many queer people and femme people are able to maintain relationships because of the Internet.

One thing that we really used our platforms for recently was pushing back against SXSW's contract that they had with all artists, but that especially became dangerous for international artists. They basically gave themselves sole discretion to deem artists' actions appropriate or inappropriate. They could report artists to immigration in a way that could lead to deportation. This was all at their own discretion. [Our movement] came from a tweet by an artist. A bunch of us got together and immediately wrote an open letter. We were able to push a campaign while in different parts of the country to get SXSW to promise not to follow through with that clause and not to include it in future contracts

I was just reading a great article about writing past the white gaze. This is something I struggle with as a writer of color- how should people of color represent their communities without using language created by white people?

Mary Regalado: Punk music was founded by black women and brown women and queer people. I'm from LA and I got obsessed with punk there, and there are so many queer Chicanos in the scene. [It's important to] own that history- I'm not doing something that is for white people. I'm doing something that brown people helped invent and that couldn't have been done without them.

Victoria Ruiz: We talk about it a lot in our songs; to really connect with people of color, you can't just have representation. It's beyond just having a person of color in your band. It's beyond "diversity". Power means a lot more than that. A lot of the language that gets used to describe history and ancestry isn't always accessible. I've especially seen white women use words around gender and sexuality that is so alienating that I don't even want to engage. Malcolm X has this quote, "Don't be in a hurry to condemn because he doesn't do what you do or think as you think or as fast. There was a time when you didn't know what you know today." How do we not condemn people but also hold them all accountable? There are moments when we're at our best and moments when we're at our worst. So, why would I put expectations on anyone that I know shouldn't be placed on me? I think that a lot of that ends up criminalizing a lot of people.

That reminds me of that video where a white woman films all the cat calls she gets in a day and the only people included in the video were people of color.
Nolan Olivio: Certain people do have it harder than others in terms of being called out and in terms of existing in DIY spaces. They make people of color seem [unusual] and are not welcoming. And because of the color of their skin they are more likely to be seen as a threat. That video is one example of that. Men of color are fetishized but are also seen as double as threatening.

I think a lot about the policing of emotion. A white man CEO who is angry is often seen as confident and commanding, but a person of color angry about the daily violence they encounter from the state is seen as a threat. How do you think about making space for anger and rage and emotion in music? Do you think that's a political act?
Victoria Ruiz: It's very difficult for people to accept when people of color or femme people or queer people are angry and voice that. I think that's why we get all these calls for peaceful protest. I've gone to dozens of Black Lives Matter protests and they were always peaceful, you didn't need to call it a peaceful protest. But, because it was a Black Lives Matter protest, it immediately had to take this narrative of threatening and violent. I think our collective anger as people who are directly affected by white supremacy is very threatening to white supremacy.

I don't know if it's so much a political act- everything is a political act, especially for oppressed communities. I think it's all that we have- this is the only thing that we know how to do.

You don't have to compartmentalize your anger. You don't have to listen to people who say "This is not the time for you to be angry." You don't get to pick and choose the time that you're angry. That's ridiculous. That's not natural. Deconstructing those myths that you can suppress your anger and your joy is why people feel connected. I also think that by saying it's condemned in society to be angry, we're erasing all of the artists and writers and musicians who actually celebrate their anger and their joy. Like Audre Lorde. The whole book Sister Outsider is all about that space.

Downtown Boys are playing today at 6:00 pm at Hotel San Jose and at 1:00 am at Cheer Up Charlie's.