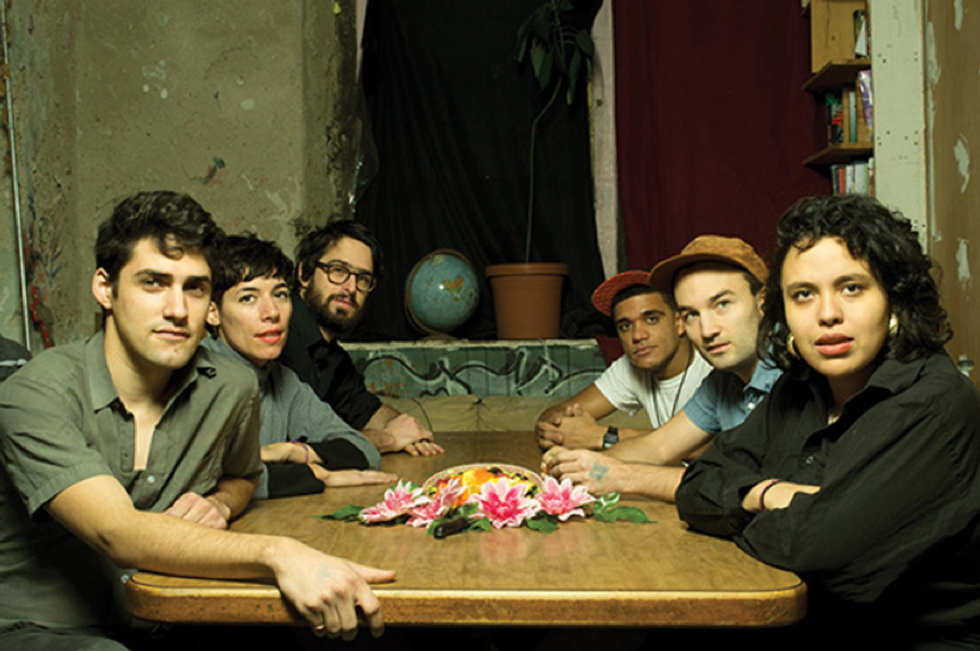 by Evan Siegel
PAPERMAG
Given America's current chaotic climate, Downtown Boys are the most relevant band in the country. Part of our Beautiful People Class of 2015, the Providence-based sextet creates blistering political punk that takes on the prison-industrial complex, racism, and sexism... just to name a few. Their new album, Full Communism, came out this past May when police brutality was yet again back in the news following the death of Freddie Gray while in custody of the Baltimore police. In an #ICantBreathe-age of general frustration, unrest and too much complacency, Downtown Boys aren't shy about raising their voices and speaking out with songs like "Future Police" and "Wave of History." We talked to frontwoman Victoria Ruiz, guitar and backup vocalist Joey DeFrancesco, saxophonist Adrienne Berry, and drummer Norlan Olivo after a show at New York's Palisades to learn more about what makes them tick.

How'd you all first meet and decide to start a band?

Joey L DeFrancesco: It's a piecemeal question I guess. A few of us first met playing in the What Cheer? Brigade, which is a brass band in Providence -- this kind of punk brass band -- and we got the idea to start playing music from that. Victoria and I first met at the Renaissance Providence Hotel, where we were working, and later, organizing. Workers are still calling for a boycott of that hotel. Adrienne used to live in Detroit and then moved to Providence, and we met her through some other stuff, and then she joined. It's been a process to get to the current manifestation of the band.

Speaking of the Renaissance Providence, I've seen your viral YouTube video, in which you brought a marching band to the hotel in celebration of your quitting. What was the impetus for doing that?

DeFrancesco: They treat people like shit at that hotel, like they do at a lot of non-union hotels all over the country. And people are fighting back. I worked in room service; Victoria worked at the front desk, and in [reception]. In my department they paid us sub-minimum wage -- $5 an hour -- and the managers and the hotel were stealing more than half of our tip money. In housekeeping they're making these people clean 16, 17, 18 rooms a day in 8 hours. I think people have a hard conception of what that means, but it's a huge thing -- you have these massive duvets, you're on your hands and knees with chemicals. People were getting chemical burns. We were taking out an OSHA lawsuit about the stuff that was going on in the hotel. It's not unique to that hotel.

I was there for 3 or 4 years and we were organizing and fighting with the guy in the video and we eventually decided to leave, so I wanted to have like one big fun action as I was leaving the hotel. But the fight continues there, and there's still people organizing there at the Renaissance.

And Victoria, you moved from NYC to Providence, right?

I read that one of the main inspirations for your move from NYC to Providence was to find more activist causes, is that true?

Ruiz: Yeah, I moved to Providence because I heard about a lot of really good organizing that was happening at the hotels and also immigrant rights organizing and anti-prison-industrial-complex organizing and activism. Also, there are a lot of artists there. It's a place where you can actually work and work on many things -- like have a wage job and an art job and pay rent. In an age where gentrification's so prevalent everywhere, all over America, it's really hard to find that opportunity.

Ruiz: Yes! I went to college in NY and I was obsessed with the LES and Harlem. Obsessed. I was like "I'm never going to leave New York: this is it." I was so in love, and in 4 years saw just so much gentrification -- like bad land grabs and stuff -- and I moved to Providence. I was like "Oh my God! This is the romance! This is it!"

Victoria, you like to talk in-between songs and oftentimes it seems like there's an educational bent. How'd that become part of your set?

Ruiz: It's funny, when we first started I was only yelling at people, and I got a lot of "I love your energy, I didn't understand a word you were saying, but I love your energy!" Which is an awesome thing to hear, but after a while, though, you constantly have to push yourself. I'm like "Man! I'm talking about these important things, and I don't want to just throw them away," and I felt a responsibility not to. Now I try to actually focus and make them understandable. They all come from experiences and things that our songs are about.

Does that also play into the bilingual aspects of your songs?

Ruiz: Yeah! Norlan and I are Latino and sometimes you see one Latino person or you see like all Latino people [in a band], but to see a truly mixed band [where] everyone is their true self is super special. The bilingual stuff comes a lot out of protest chants.

I feel like that speaks a lot to the inclusiveness you guys try to practice.

Olivo: There's sort of this juxtaposition that we have as a band, where we are like this "force": we are this punk band, but the messages that we are giving people, the way that we are preforming, and the fun energy that we are bringing to the music is really important, as opposed to a lot of punk or hardcore bands that don't have any of this juxtaposition. It's just like angry, (for the most part) white males talking about angry stuff and yelling at people. It's sort of interesting that dynamic: how to balance having fun with a positive message, but also just being a punk band and staying true to that sort of aesthetic.

What are your thoughts on what's happening in our country with recent events in Texas, Ferguson, Ohio and Baltimore, among other places?

Ruiz: What's going on in Baltimore is just the next step in history. It's completely related to the trans-atlantic slave trade, it's completely related to neoliberalism, it's completely related to the way this country functions. We are in a complete watershed moment. It's completely urgent, completely critical, and it's completely violent -- on both sides. I think it should not be romanticized by the left and it also shouldn't be alienated by the right. Everyone has a part in making it relevant, and thinking about the step before it, and really the step after it. It comes up because police in the US are the kin of slave brigades, who are the kin of slave owners, who are the kin of white, male imperialists that came to this country and massacred Native Americans. Freddie Grey is resting in power with many people who have been massacred over the past 500 years, and the people who are rioting and who are fighting are in solidarity with the people who have resisted and fought for the past 500 years, and will continue for the next 500 years.
You May Also Like
Famous People