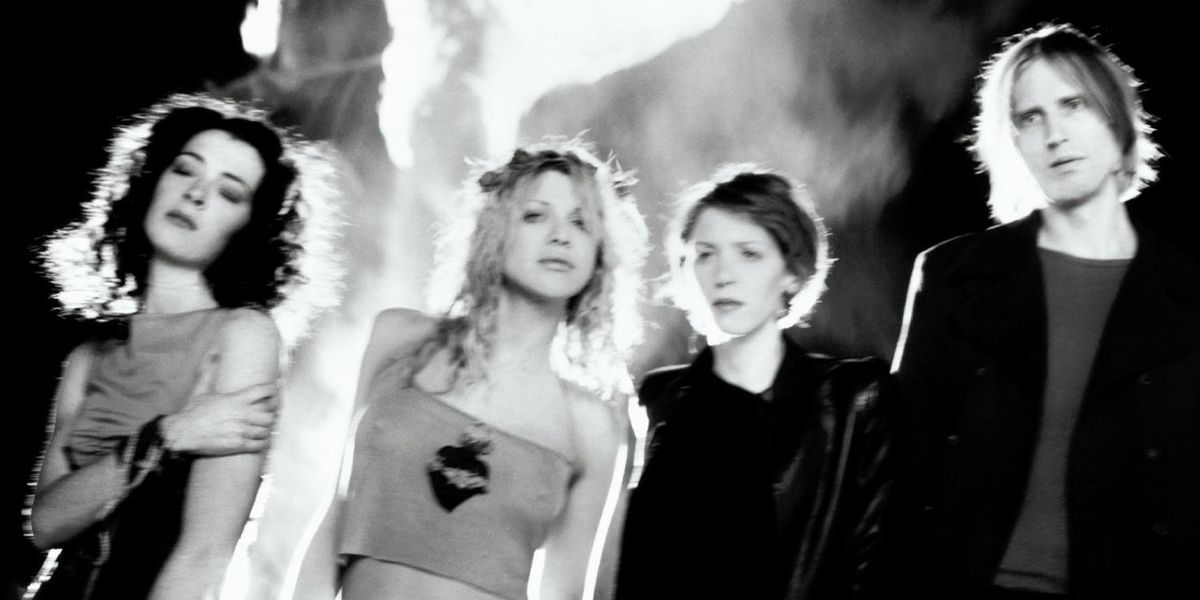 Our 10 Favorite Love-Hate Songs About L.A.

Everyone loves to hate LA. Still in 2018, hating the city that's equally notorious for being a glorious free-for-all of opportunity, freedom and reinvention — and an establishment-run traffic-ridden hellscape of egomaniacal social-climbers, remains a varsity sport. But long before there was La La Land or "No More Parties in L.A." there were generations of pioneers tackling our terrible son of a city.

On Saturday, one of the defining pieces of L.A. pop culture turned twenty years old. Hole's third album Celebrity Skin was released this past weekend in 1998 (yes, 1998 was 20 years ago). The record tells the story about modern Los Angeles, in all it's guts and glory, through the lens of Courtney Love's volatile relationship with the city and its culture.

Love's husband Kurt Cobain had killed himself four days before the release of Hole's sophomore album Live Through This in 1994 and Love had become a tabloid-time-bomb, marked by her public suffering. Celebrity Skin was meant to be her reinvention from sob story to superstar, and she used the album to do it, interrogating beauty, fame, sexuality, stardom and spectacle in the process. Although, of course, scandal and further self-destruction followed the album, it was Hole's most commercially successful album, defined the post-grunge power pop sound of the 90's, remains some of the most poignant pop culture to ever take on L.A.

There are a thousand different L.A.'s, and today's L.A. is remarkably different than the city (more Kardashians and açai bowls, less rock and roll, maybe less heroine?) than the one Love sang these words about: "When I wake up in my makeup, it's too early for that dress/ wilted and faded somewhere in Hollywood / I'm glad I came here with your pound of flesh/ No second billing cause you're a star now/ Oh, Cinderella they aren't sluts like yo / Beautiful garbage beautiful dresses" ("Celebrity Skin"). And these: "Ocean of angels/ Oceans of stars / Down by the sea is where you / Drown your scars" ("Malibu").

But people have always had reasons to love and hate the place. So, to celebrate 20 years of Celebrity Skin, we've gathered a few of our favorite songs, past and present, that grapple with the city of angels.

There's a Tupac walking tour of L.A., which should give a sense of the massive role the rapper has played in our imagination of the city. The icon of West Coast hip-hop penned an epic love-hate poem to the city on his final album in 1996, giving a thorough geography of his city, celebrating its beauty diversity and mourning its "soap opera" drama and "constant danger." In the end though, "it's the only city for [him]."

Allie X is over L.A. In a Lana-esque whisper-drawl, she sarcastically lists off all of L.A.'s lovely redeeming qualities, like being a city where "you start to get old when you turn 25," "the ghosts of the '90s walk the streets," and "the Venice girls smile with the whites of their teeth, all licking their lips for a quick 15."

X defined L.A. punk, and on their 1980 hit, skewered the city's superficiality, racism and sexism — and what it can do to a person living inside of it (although controversially and in the wildly poor judgement that punk often employed, used racial slurs in the lyrics themselves to condemn discrimination).

On her largely unsung EMOTION bop, Carly Rae reflects on how fame and money L.A begets, often creates and endless desire for more — complete with killer callout of media scrutiny: "Buzzfeed buzzards and TMZ crows / What can I say that you don't already know?/ Buzzfeed buzzards, and TMZ crows, if I just lie here then will you let me go?"

Jason Schwartzman's strangely good indie-pop act, Coconut Records positions the West Coast as the cure rather than the disease in his nostalgic, lonely-love song. His dreamy 2008-era longings for L.A. are enough to make an East Coast middle school girl pack her bags.

Old Hollywood is a crucial part of Lana iconography. The (NYC-born) enigmatic queen inserts California imagery into her music every chance she gets, but her most explicit L.A. tribute is this psychedelic-rock ballad, telling a depressive, parable-like love story of a woman torn between love and ambition.

In his despondent, post-addicted lonely-boy phase, on the Blood Sugar Sex Magik track Anthony Kiedis reflects anthropomorphically on his tenuous bond with the L.A. (she's his only friend!), in a moment of pop culture that has surely inspired generations of high school boys to dream of the city. "Under The Bridge" is a perfect example of the city's larger than life-ness, and the ways that people project whatever they need onto L.A., good or bad (hm, kind of like we do to women...).

Jenny Lewis's pioneering indie rock project put out this soulful, folky ode to L.A. in 2013. An L.A.-based touring band, Lewis bemoans the "Eastern seaboard, the landlocked Midwest, the Keys, the Alps, the Black Hills and Budapest" and paints L.A. as a give-us-your-sick-and-your-poor, welcoming embrace: a place which will always take her back no matter how much she fucks up.

Ben Gibbard had had it with L.A. in the early 2000's: from it's grime and sprawl ("It smells like an airport runway / garbage cans comprise the medians of freeways / always creeping even when the populations' sleeping") and the people ("I can almost see a skyline through a thickening shroud of egos / Is this the city of angels or demons? / You can't swimmin a town this shallow").